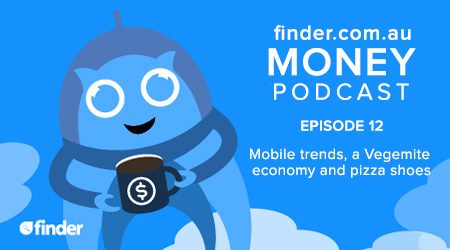 On this week’s finder.com.au Money Podcast, we give you the lowdown on air in a jar, pizza-ordering shoes and why finding a $20 bill could be more trouble than it’s worth. We also welcome back editor-in-chief Angus Kidman, who updates us on all the new phones launched at the Mobile World Congress, and explains how Vegemite gives us insight into good money habits.

Notes and links mentioned in this podcast

Question of the week: What crazy feature would you add to your mobile phone?

Leave your answer in the comment box below or email us at aupodcast@finder.com

Music used in this week's podcast