The Peugeot 308 GT-Line is quirky, but lovable.

Take a look at the photo above. What do you think?

I reckon the Peugeot 308 GT-Line is one of the best-looking hatches on the market at the moment.

It is priced from $34,990 and that is exactly the spec that our test car came in. There were no options or extras fitted – which makes quite a statement.

You don't see many 308s on the road, and in the sales charts, Peugeot is well behind more established manufacturers in Australia.

Maybe that's because, at that price, it is duelling with some quality, well-appointed and, frankly, more powerful competitors. For instance, you could get the Mazda 3 G25 GT or the Kia Cerato GT for a similar price.

Inside the cabin of the 308, everything is quite simple. You get a couple of buttons, a 9.7-inch infotainment screen, a uniquely shaped flat-bottom steering wheel and some seats.

That's probably oversimplifying the interior a bit, but I don't think that is a bad thing at all – it just seems to work.

With no order sheet options ticked, you get cloth seats that are manually adjustable, but they are still comfortable to ride in. As the driver, you'll be able to set yourself up in quite an agreeable driving position, with the Peugeot's trademark dashboard sitting above the steering wheel. 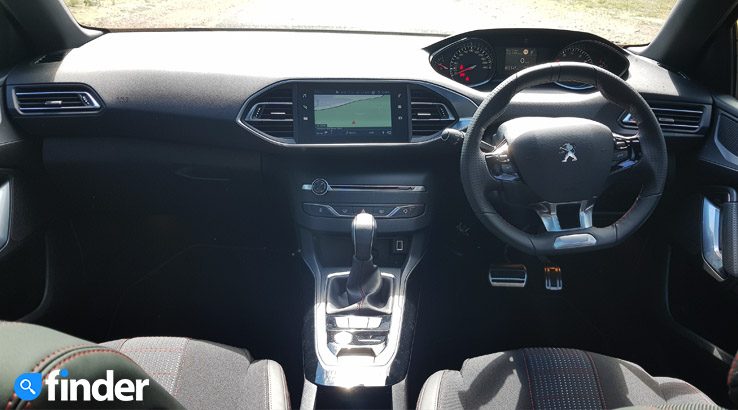 A lack of telescopic adjustability of the steering column does mean those with shorter arms and longer legs may have to fine-tune the seating.

There is one USB port up front, which you can connect to your phone in order to engage Apple CarPlay or Android Auto on the 9.7-inch touchscreen.

Through the touchscreen, you will be able to control most things, including the dual-zone climate control, driver safety technology and satellite navigation. While the graphics might be slightly behind the times, there weren't really any complaints about the system itself.

For miscellaneous item organisation, you'll find a small storage bin and a single solitary cup holder, which is also a bit small in its own right. Surely the driver can call dibs?

Throw some keys or your phone into the cup holder and you might find they disappear or get wedged in some crevices. You see, the cup holder also folds up for some additional storage space ... or to find your missing keys.

In the back, there is one USB port to share between passengers – if they can fit in there. In truth, there isn't that much legroom for adults, but it should be adequate for smaller kids. Put it this way, I couldn't fit behind the driver seat, which was set in my driving position.

You get the two standard cup holders in the back and storage bins in the door. There's also a little ski-hatch in case you need to carry something like fishing rods or other longer, narrow cargo, but don't want to fold the seats down.

If you do need to fold them forward, they separate into two segments, with a 60/40 split.

What is the boot like on the Peugeot 308 GT-Line?

Peugeot makes 435 litres available to you with a nice, deep cargo space. In technical terms, that's a fantastic amount of storage in a vehicle this size. For context, the MG HS SUV we reviewed the other week had 463 litres, and it's an SUV!

It beats out virtually every competitor in this regard, with fellow Euro import, the Volkswagen Golf coming in at puny-by-comparison 380 litres.

On paper, things look a bit grim. Peugeot has done away with the old 2.0-litre turbo from the 308 GT and replaced it with a 1.2-litre, 3-cylinder "PureTech" turbo petrol unit that produces an underbaked 96kW and 230Nm of torque. If you want more spice in your life, then you'll want to plump for the GT, which has 165kW.

It is paired with a six-speed automatic transmission that goes about its business without fuss.

All is not what it seems though. You see, the 308 GT-Line weighs in at just 1,122kg meaning, while the output numbers still aren't all that impressive, it is quite a satisfying drive.

On the daily commute, it will get the job done without fuss. If you need that bit extra in certain situations, say, overtaking, it'll admirably step up to the mark.

There is also the "S" button, which sharpens everything up. With that turned on, it honestly feels like it has more power than it does on paper.

The steering is also well weighted and with the rather unique, flat-bottomed shape of the smaller-sized steering wheel, directing it through corners is just about enjoyable. But not everyone reading this is worried about how much fun it is through corners. 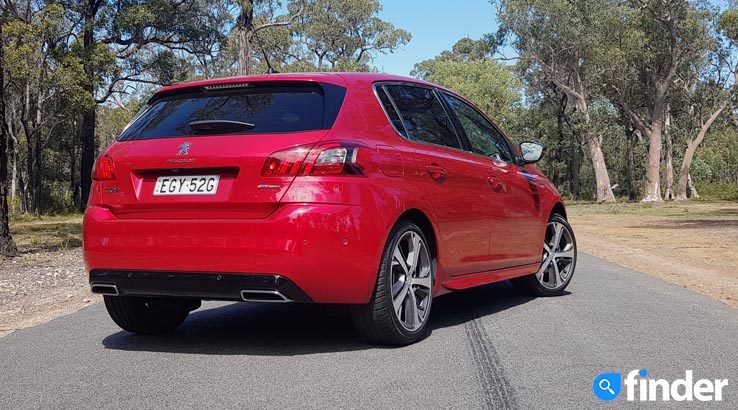 So, I'll hit you with some real-world character traits.

It has a 10.4-metre turning circle, meaning parking and manoeuvring into spots or around tight carparks is a breeze. This is just a metre more than a tiny Kia Picanto GT.

Suspension is set up towards the stiffer side, but without rattling your spine to pieces. But, this is to be expected if you are buying this new subclass of sporty GT-Line vehicles. The ST-Line Focus, for instance, is much the same.

Fuel consumption is rated at 5 litres per 100kms by Peugeot; however, we couldn't replicate those figures with a combination of city and highway driving. We were a bit liberal with our use of the Sport button, which saw our final figure come to 8.3 litres per 100kms.

You get a fair bit of kit as standard in this little hatch. By default, you get the following:

Not to mention that when last tested, the 308 received a 5-star ANCAP safety rating.

Despite its quirks, the 308 GT-Line is a brilliant little car. It's great to look at and engaging to drive, if not slightly underpowered. At this price point, it is competing with hatches with a bit more power and, in the case of the Mazda 3 in particular, more premium interiors.

But none of them look this good.

Compare some options to finance a Peugeot 308 GT-Line