PayPal’s crypto offering: How big a deal is it?

Not only is PayPal big, but it has reason to actively rather than passively sell Bitcoin.

According to CoinDesk, citing a "well-placed industry source", PayPal is planning to offer direct cryptocurrency buying and selling, potentially within the next three months, through both PayPal and Venmo.

In response to inquiries the company said, "PayPal does not comment on rumors or speculation."

Speculative commentary on rumours as follows

PayPal would be far from the first fintech to introduce cryptocurrency purchases as an accoutrement to existing services. Robinhood, Revolut, eToro, Square's Cash App and Raiz all already let people buy, or at least gain exposure to, Bitcoin. 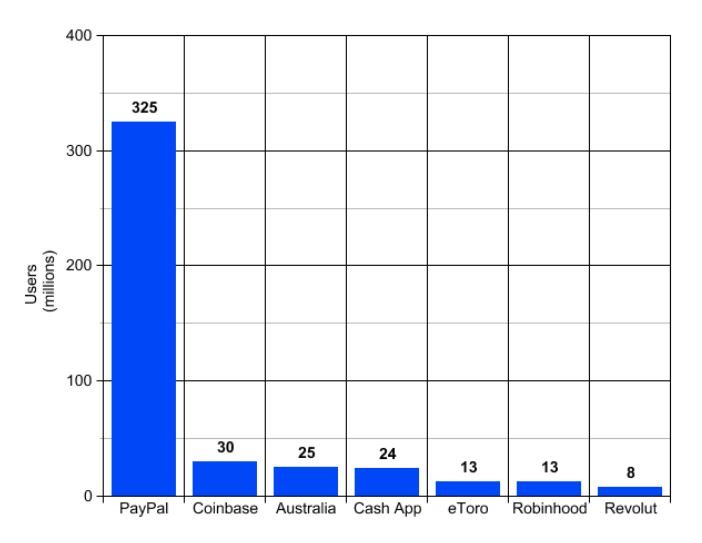 It's tough to say how many people actually use Bitcoin, but estimates say maybe a million people on a very, very good day. And even in market cap, where cynics would say Bitcoin's prominence is most grossly overstated relative to its actual use, PayPal still leads Bitcoin with a market cap of US$200 billion vs $175 billion at the time of writing.

Due to PayPal's sheer size alone, the event likely can't pass without having at least some kind of impact on the cryptocurrency world. Simply exposing that many people to the very idea of cryptocurrency is a big deal, given crypto's struggle for lasting mainstream recognition.

“Major companies like WhatsApp, Square, Robinhood, Fidelity and others adding support for digital assets is a huge social validator to the industry," notes BRD (the Bread wallet) CEO Adam Traidman. "The more bridges that exist to what consumers already use, the faster the rate of adoption. These household names are crucial to getting digital assets into the hands of consumers because to get consumers to understand something radically new, you have to deliver it to them in something known or old."

But how many people will take PayPal up on its new offer?

After all, buying Bitcoin isn't that hard anymore, but there's still a stark gap between all the surveys saying ~50% of millennials are into cryptocurrency, and all the other surveys finding that most people aren't sufficiently into it to make a financial commitment.

It's important to note that, assuming this happens, PayPal probably won't just be passively offering up Bitcoin. It will be actively trying to unload the stuff on its audience, because there's money in those sales. This factor could help amplify the impacts of this move.

Square's experiences suggest that Bitcoin sales can be a solid revenue stream with few downsides.

Downsides-wise, Square showed that it can start selling Bitcoin without cannibalising its bread and butter business of transactions. As PayPal, like Square before it started offering Bitcoin, gets the vast majority of its revenue from transactions.

Plus, Bitcoin's high on-chain transaction fees mean payment services probably don't have much to fear from it. It's possible that Bitcoin's shortcomings are part of the reason it could end up succeeding here.

Square's experiences won't necessarily be comparable to PayPal's though. Among the many other differences, Square leans heavily on domestic US payments while PayPal handles a lot more international transactions, but maybe it's close enough.

"The news offers another affirmation that traditional payment players can no longer ignore the potential business opportunity presented by crypto, and are now even willing to risk disrupting their own fiat based platforms," said Seamus Donoghue, VP of sales and business development at crypto tech firm METACO. "Evidently, PayPal has seen the success Cash App has had with crypto and wants a piece of the pie, and may view Venmo as a potential means of building a similar, sustainable business model."