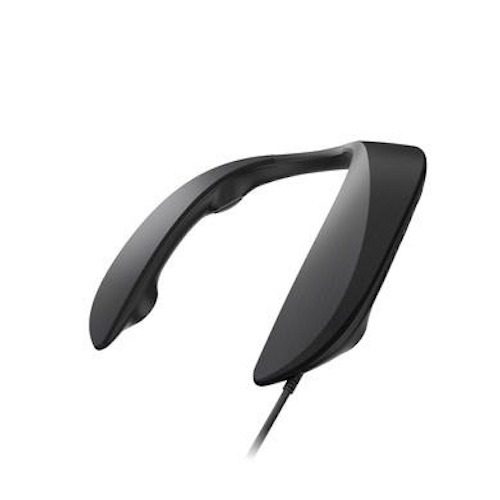 Over the years, I've seen a lot of hardware that's meant to enhance your gaming experiences through all kinds of technological means. Panasonic's latest foray into this space is the Panasonic SoundSlayer GN01 wearable speaker system. It's essentially a neck-based speaker that's meant to keep you in the game while leaving you aware of your surroundings.

The promises (like so much "gaming" hardware) are bold, but the reality very much left me wanting. 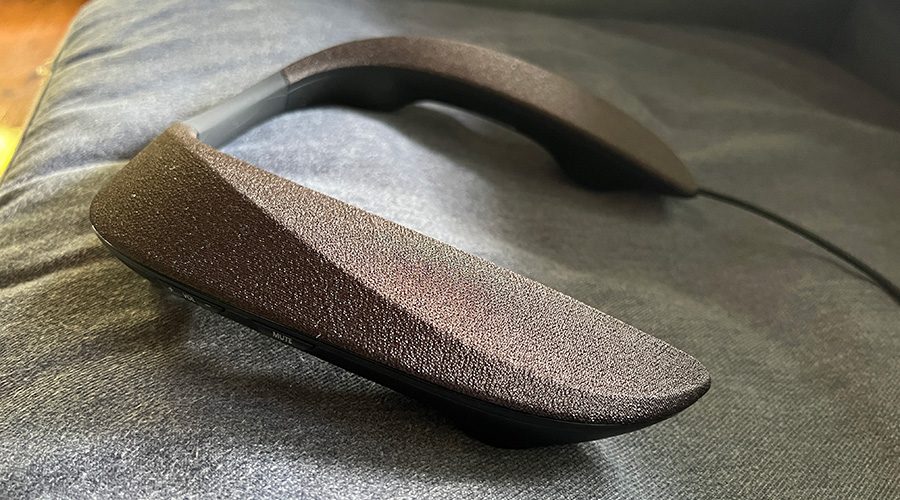 The Panasonic SoundSlayer GN01 is certainly a weird-looking speaker… or is it a headphone?

No, it's actually a speaker, even though it's got a name that sounds more like it would work as a Buffy podcast.

I don't want to dwell on the branding for too long. But I won't lie – I was somewhat nervous placing anything with the word "Slayer" in it around my neck.

You also can't miss the branding because every time you power it up, a disembodied voice says "SOUNDSLAYER" loud enough for anyone else to hear. I would truly hate to be on a plane next to anyone wearing it.

Speaking of planes, it also reminds me a lot of those cheap neck pillows sold in every airport across the planet, except that there's relatively little padding around the neck. It's quite a simple design, with dual speakers in each arm and control buttons on each side.

On the left is a mute microphone button and sound equalisation button, while the right houses sound mute and volume control buttons.

I didn't hit issues with accidentally nudging them with my shoulders, but it did take some time to remember which button did what. Outside volume, you'll learn quickly because the Panasonic SoundSlayer GN01 announces each button as you press it, muting the audio when it does so. It would be nicer if it kept the audio flowing.

The Panasonic SoundSlayer GN01 offers 2 connection methods via either USB or 3.5mm audio. The USB cable is built into the headset, while the 3.5mm cable hooks up via a flap on the left-hand side.

Performance: Easy to set up – but cluttered and underwhelming 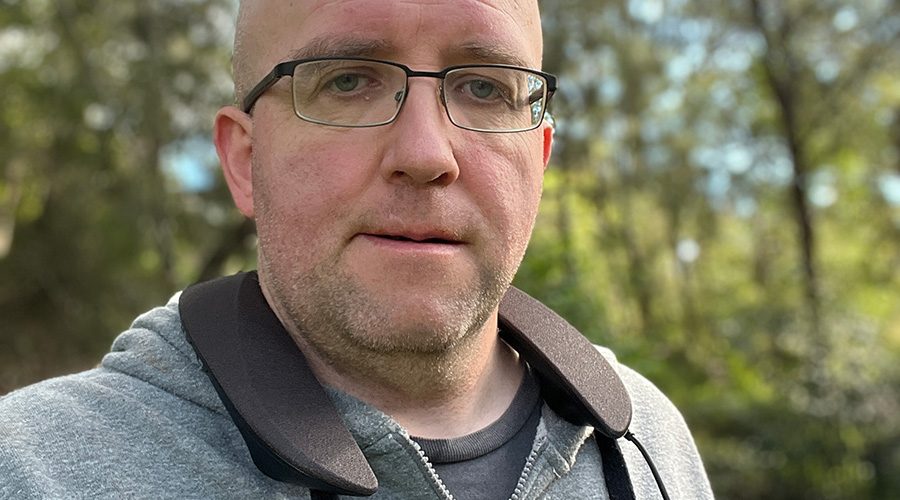 I can't fault the Panasonic SoundSlayer GN01 when it comes time to connect it to your gaming sound source of choice because it's very flexible.

USB is clearly the cable connection of choice, and its 3m cable does allow for connectivity quite a distance from your gaming system of choice. The only additional hardware I needed to track down was a USB-A type to USB-C type adaptor for hooking up to devices such as the Nintendo Switch. For everything else, there's a similarly lengthy 3.5mm audio cable.

However, I was instantly struck by the realisation that the same cables that make it possible to be some distance away couldn't help but feel distinctly retro.

I'm a man who appreciates most retro gaming concepts, but cables that easily tangle aren't one of them.

That's especially true if you're gaming on a console. It's almost ludicrously cluttered if you connect up to an undocked Nintendo Switch. I felt silly sitting in my living room with this many cables on my lap while trying to play. 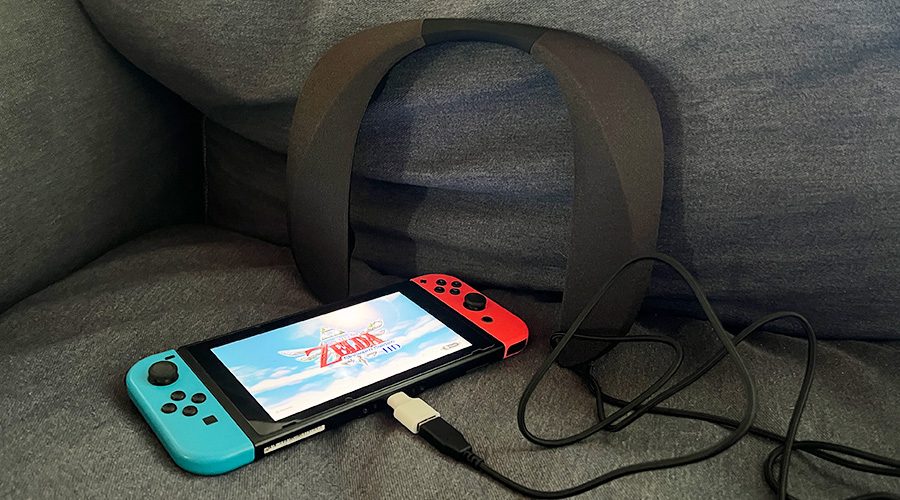 Given the preponderance of Bluetooth across most console gaming systems and the ease of adding it to PCs if it's not already there, it feels like a total missed opportunity not to have thrown batteries into the Panasonic SoundSlayer GN01.

The other challenge for the Panasonic SoundSlayer GN01 is effective audio. Panasonic claims that the quad speaker set-up – 2 in each armature – allows for immersive surround sound, with the choice to switch between Cinema, Stereo, RPG, FPS, Voice or Music modes. It's further claimed to be more comfortable for longer gaming sessions.

All great in theory, but it ultimately didn't really impress me when it came time to actually get down to gaming.

One caveat here is that I'm bald, so the Panasonic SoundSlayer GN01 was sitting directly on the skin of my neck. If you've got a full head of hair, it might be more comfortable – but then I'd worry about whether your hair might also sit on top of the speakers and muffle them.

Audio output was fine, but I never quite felt the "surround" experience that Panasonic promotes as a key feature of the Panasonic SoundSlayer GN01s.

The only big difference in equalisation I could pick in modes was dropping down the basic stereo. I can't see too many gamers switching specifically around a whole lot of the time.

You can probably guess this by now, but what was ultimately lacking was any real sense of immersion. Indeed, it's much more of a shared experience because anyone in the same room with you will hear everything you're doing in-game, any voice chats and any ambient sound at all.

Switching games between the Panasonic SoundSlayer GN01 and a set of gaming headphones, the immediate difference in isolation and immersion was absolutely noticeable. With the Panasonic SoundSlayer GN01 speakers on, I couldn't help but feel as though I was sitting in a room, playing a game. Which I was – but with gaming headphones on, I could so much more easily lose myself in the game.

Any gadget you buy should help you solve a problem.

Need to mow a lawn? Buy a lawnmower. Need a cup of coffee? Buy a coffee machine.

I'm struggling to work out what the problem that the Panasonic SoundSlayer GN01 solves actually is.

If you want immersive in-game audio, there's absolutely no doubt that you'll be better off with a full gaming headset, especially at the SoundSlayer's $299 price point.

Even if, for some reason, you did actually want to broadcast whatever it was you were listening to across your room, you could do that more impressively – and cheaper – with a set of decent gaming speakers.

This leaves an incredibly tiny niche of users who might find the Panasonic SoundSlayer GN01 actually useful. If you can't for some reason bear to have headphones on your head, this shifts that pressure to your neck and that might have some value.

The Panasonic SoundSlayer GN01 retails in Australia for $299.

I tested the Panasonic SoundSlayer GN01 speakers connected to a Windows 11 PC playing a range of games including Forza Horizon 5, Hades, Borderlands 3 and Halo Infinite. On the console side, I primarily tested on the Nintendo Switch, playing Breath of the Wild, Mario Kart 8 Deluxe and a range of indie games.

I've been a tech and games reviewer for more than 24 years now, writing across gaming generations stretching back decades. I'm a multi-time Australian IT Journo award winner, including awards for best reviewer and best technical journalist.

I'm also strangely reminded of the Aura Actuator by the Panasonic SoundSlayer GN01. I'm probably the only one, though.