Optus EPL vs watching at the pub: Which is cheaper? 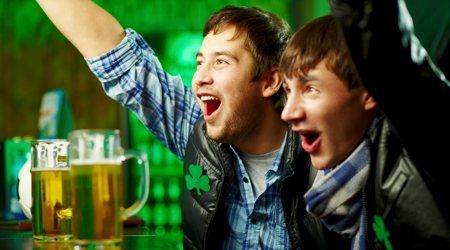 Soccer fans are outraged by Optus’ EPL pricing. Would it actually be cheaper to watch the soccer at your local pub?

The largest bone of contention that EPL fans appeared to have when Optus announced the pricing to watch EPL was announced yesterday (you can read our breakdown and analysis of that pricing here) was that there's no way to view the soccer without signing up for an Optus broadband or phone deal.

The smallest and shortest obligation would be the new month-to-month SIM-only plan at $85 per month; every other available option tied to a 24 month contract. If you’re already an Optus customer on a qualifying package you’re set, but if you’re not it’s a reasonably serious outlay for EPL coverage.

Choice put out an infographic comparing the cost of a two-year Optus broadband package to the cost of flying to the UK for a single match. The infographic got a lot of social traction yesterday, partly because Choice's calculations suggested flights plus match plus beer were cheaper than the two-year EPL broadband package. The sums are probably correct, but I do think it's a rather silly comparison. There’s a huge difference in being at a match rather than watching it on the TV, and while it would cost less as a one-off exercise, you’d only get one match out of it, as well as sore legs from 40+ hours in transit to get there and back. And the Optus contract would get you two years of broadband, which is a service the majority of Australians want in their home.

One thought struck me as I was writing up yesterday’s analysis, however. Optus is inviting folks who run large-scale venues to approach them for broadcast rights. That’s a fancy way of saying that they’re open to pub licensing. So in theory, one way to get your EPL fix would be to find a pub that’s broadcasting Optus’ EPL feed and watch games there instead of at home.

But what would that cost you? Pubs, like Optus and indeed the EPL itself, are businesses. Pubs show sport because they figure they'll make money from you buying drinks while you watch. Any pub paying whatever Optus wants for EPL broadcast rights would certainly be hoping to ring up a few extra beer sales. But could you buy a few beers and still end up with a cheaper deal (and some beer)? We've done some rough calculations, based on the following assumptions:

So, what’s your cost basis going to be? If you assume four matches per week, that’s a total of eight hours at the pub.

How much you drink is a personal matter of course, but we’re going to assume that you have to make your own way home after each match. That means you should stay within the legal drinking limits for driving, which are generally suggested at 2 drinks in the first hour and one thereafter for males of average size, and one drink per hour for females. That means 3 drinks per match for males (on average) and 2 for women, or 8-12 drinks per week depending on gender and alcohol tolerances.

How much will those drinks cost you? Pricing varies depending on your tipple. Numbeo suggests an average Sydney price of $7, while Pintprice ranks an Australian average of around $8.50. We're going to conservatively tip towards that flat $7 price, to cover the range between cheaper venues (sports clubs, RSLs) and more upscale establishments.

From there, the sums are relatively easy to calculate out over 38 "weeks" (20 teams times 2 games, minus 2 because teams can't play themselves; while the EPL calendar doesn't quite align to "weeks" per se, that would at least cover every match for "your" team plus plenty of other fixtures). If you were to watch all four games of your choice at the pub and maintain a steady drinking rate, you’d spend between $2,128 and $3,192 in a single season (and twice that if Optus retains the rights for two full EPL seasons).

Comparatively, the lowest cost Optus offering, a $40 My Plan Plus mobile plan plus $15 for EPL coverage and $5 for the Fetch Mini device over two years would leave you with a total bill of $1440, which leaves quite a margin for buying your own beer at home.

It is possible to beat that single year pub figure if you go for the full whack My Entertainment Plus Broadband package without a bundled Optus mobile; the full two year cost for that would be $3,360, and would provide you with two years of broadband plus EPL coverage on other devices. Two years spent in the pub would cost you at least $4,256 and do an uncertain amount of damage to your liver. As always, remember to drink responsibly.

The bottom line? The Optus deal isn't cheap, but there isn't an obvious cheaper way out, short of hanging around in the pub and drinking nothing at all. Good luck persuading the owner to let you do that four times a week.