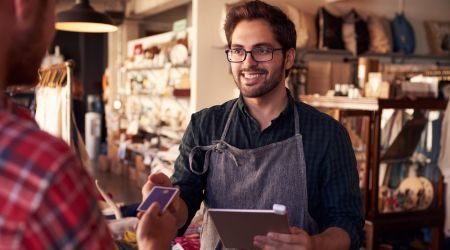 The payment service is up against listed competitor Afterpay.

Interest-free finance is not a new concept, but innovation in the space has been limited. Payment service Openpay plans to innovate the sector through seamless payments, paperless processes and higher credit limits. Its "shop now, pay later" service is offered across a broad range of retail industries, with credit limits up to $10,000 available, and is offered in-store and online.

Openpay's main competitor is listed Afterpay, which focuses on the retail space. Other operators in the space include zipMoney. Openpay CEO Simon Scalzo, former head of national retail practice at BDO, thinks the lack of competition in the space is because the concepts and systems are new.

"It’s very different and very new and it takes a while to build a system that has that type of capability, but that also means that the opportunity is really big as well, right?" he said.

"If we think about the market, and Australia itself and the broad brush retail, it’s a $300 billion market, it’s huge. This is a new one for a service in that market, and there are even new areas in the market that are being opened up, because of the flexibility of the system."

"It is exciting and it is interesting, but there is a bit of a delay in ensuring you build an appropriate system before you can get into it."

We’re not going to stop, this isn’t our final product

Openpay works in a large number of shopping verticals, with automotive, retail, home improvement and medical merchants counted amongst its retailer portfolio.

"I think the system is limitless in the retail environment. I think there are certain areas that Openpay won’t go into because there are potential risks in those areas. An example might be high-end jewellery, it’s just a risky area where there’s an opportunity to purchase something over time interest-free and then potentially resell that item...But I think on a broad brush perspective, the opportunities are really endless for the broader retail environment."

Both online and in-store payment options are supported, but Scalzo's focus is getting the service in front of consumer's eyes before the point-of-sale. This is solved in-store with Google's beacon technology, Eddystone, and the Openpay app. When they enter a retailer's store, shoppers will receive a notification on their phone that Openpay is available.

The benefits of the technology Openpay uses extends to retailers as well. Retailers can receive data around the performance of their salespeople and their stores, which they can check through a retailer portal.

The payments provider is backed by an enviable advisory committee. This includes Neal French of Google Asia Pacific, director of human centred design at IAG Harriet Wakelam,Kel Purser, formerly from Target and Wesfarmers, and Steven Borg, CEO of AOPEN for Australia and New Zealand. Scalzo said he was proud of the team and of their potential for the business.

"These guys really help the product to continue to evolve, we’re not going to stop, this isn’t our final product, it will continue to evolve and become even more seamless, we’ll leverage off these guy’s knowledge and know-how from a tech perspective, but also from a channel perspective as well on going to market. We’re really proud of that fact."

Signs are good for Openpay, with close to 70% of users returning to Openpay after their first purchase. Scalzo's current plans are for the company to make an IPO.

"Things change daily, but at the moment our process is to do an initial capital raise, and that’s because of the growth the business has had. I can tell you in the last quarter the business has doubled, and it’s continuing to grow, so we need to help facilitate that growth."