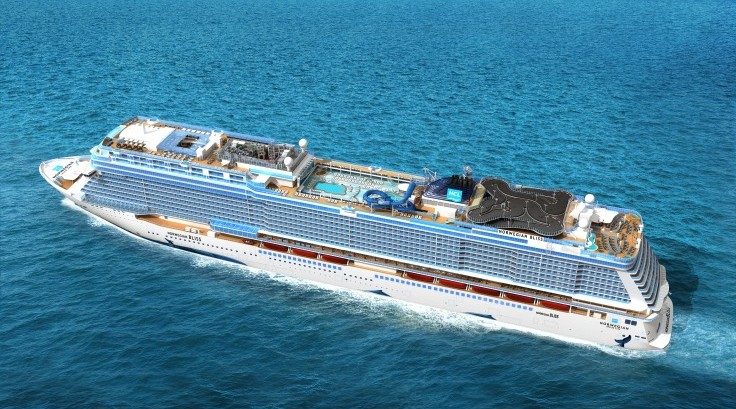 You've never seen anything like it. Mostly because it's never been done before.

Norwegian Cruise Line (NCL) has unveiled something completely different with its new Norwegian Bliss cruise ship, taking a turn for the thrilling with a fresh adrenaline-fuelled take on times at sea, while retaining all the classic relaxation features that you can expect to find on a high-end cruise ship.

The most distinctive feature is the race track. This is where guests can race specially-designed electric vehicles and clock speeds of over 50-kilometres per hour on a track that spans about 300-metres across two levels of the ship's top decks. The cars are designed to run silently so as not to disturb the peace and quiet at sea, but racers will get the full experience with sounds pumped in through the car headrests.

After satisfying your need for speed, arm yourself with cutting-edge laser tag guns and go for glory in the open-air laser tag arena which is dressed up as an abandoned space station for an atmosphere that you certainly won't find at sea very often.

After fighting for your life in deep space it might come as a surprise to step back out and take in the water park. It features two large pools and six infinity hot tubs.

If you want to keep the rush going, try one of the two multi-story waterslides. The first is the Ocean Loop, which starts off with a momentum-building free fall and then races you around two loops, including a see-through twist that takes you down to the deck below.

The other slide is the built-for-two Aqua Rider which is designed for racing side-by-side on inner tubes. This one is not for the faint of heart, with a high-altitude speed ride over translucent sections to give sea views far below as you race onwards.

As you might guess, this ship could be a great for family getaways, and NCL has gone above and beyond to accommodate the young, and the young at heart. The ship has special (and thoroughly supervised) sections just for kids of different ages including NCL's award-winning Splash Academy program for ages 3-12 at the Kid'sAqua Park. Teens aged 13-17 get their own section on Deck 5 right next to the arcade.

The tiniest cruisers aren't left out either with NCL's largest ever Guppies program, designed as an educational sensory-oriented learning experience for kids aged 6 months to 3 years. 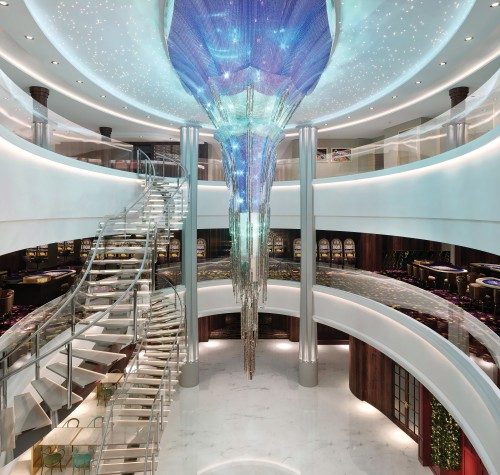 The lobby at Ocean Place

You won't find a shortage of fine-dining on board, as well as some less fine-dining for when you just want plain good eating. The chic Texas smokehouse restaurant, chic-ly named Q, will satisfy all your barbecue needs, with an emphasis on brisket, ribs, sausage and chicken dishes, smoked to perfection. If that's not enough, Norwegian's signature American restaurant, Cagney's Steakhouse will also be coming on board, featuring the choicest cuts.

For something less classic, drop into Los Lobos for "elevated Mexican cuisine" like guacamole prepared tableside, handcrafted margharitas and everything else from south of the border.

Beer-lovers might inevitably find themselves at The District Brewhouse, while wine-lovers won't want to miss The Cellars - Michael Mondavi Wine Bar.

You can also expect a revolutionary spa and fitness centre, with its own specially designed salt rooms and thermal lounges. Visit the nightclub and deck parties at Spice H2O, have a flutter at the casino (separate smoking and non-smoking sections available) and don't forget to have at least one or two nights at the theatre for your choice of NCL's award-winning stage shows.

As if that wasn't enough, the Bliss has also found room for a 2,000 square foot observation lounge and whale watching deck, with panoramic 180 degree views through 235 square metres of floor-to-ceiling windows, all the better to take in the the views in complete comfort.

If you want to make a booking or explore the ship's itinerary more, simply head over here to CruiseAway and do a search for Norwegian Bliss.