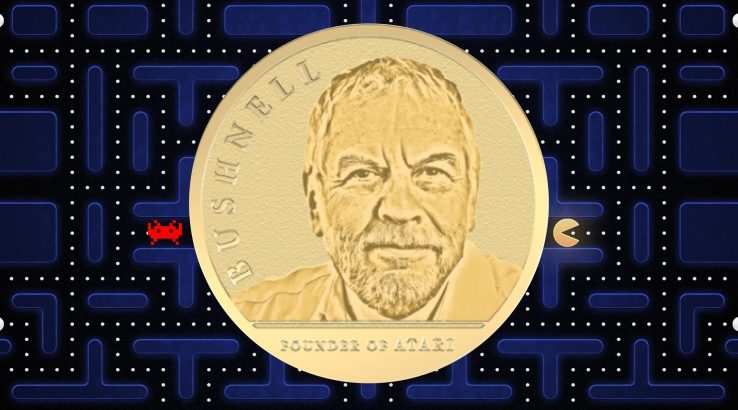 Games industry icon and legendary developer, Nolan Bushnell, is having his life’s journey turned into a film if its makers can sell you enough of the Bushnell Token cryptocurrency.

Way back in 1972, Nolan Bushnell got sick of working as a pinball repair man and founded a little company called Atari. He then released a little game called Pong. That was a long time ago. In fact, Bushnell and his company had released well over 150 games and three consoles before the Nintendo Entertainment System even saw the light of day. This included such hall of fame games as Pac-Man, Asteroids, Battlezone, Breakout, Missile Command, Centipede, Adventure, Space Invaders and the aforementioned Pong.

No wonder he is called the godfather of the video games industry!

Bushnell has never been too far from the spotlight and continues to remain linked to the latest and greatest technology. Most recently he even started Modal VR, a company exploring large-scale virtual reality systems for big operations like the military. In between, he has done everything from launch Chuck E. Cheese's Pizza to knocking back an offer from Steve Jobs to own one-third of Apple for $50,000. It’s a heck of an interesting life and it would make a heck of an interesting tale.

Vision Tree agrees. The production company is making a biopic on Bushnell’s life called Atari, written and directed by Brian Hecker, and produced by Leonardo DiCaprio. Apparently, the film has been in development for at least a decade, given that Bushnell himself – now 73 – revealed he has been a supporter of the movie since it was brought to his attention ten years ago.

“Reflecting on how far we’ve come in our short-lived tech age, Nolan is a true unsung hero, having introduced the computer to the masses in ’72, before even pocket calculators hit the mainstream. Nolan’s work ethic, coupled with his rebellious spirit, has inspired me each day of our 10-year journey working with him and his family to get the story right. We couldn’t be more thrilled to engage with all tech-lovers, game enthusiasts, and dreamers who’ve been told ‘no’ to help bring this incredible underdog story to the big screen.” - Brian Hecker, director of the Atari movie

While the announcement of the biopic itself is not revolutionary news, the way in which Hecker & Co are funding it very much is. They will be crowdfunding its development through the release of a cryptocurrency called the Bushnell Token. The Bushnell Token will receive an initial coin offering (ICO), with fans who jump in and buy some effectively crowdfunding the project and getting it from its current pre-production phase, into full production.

By strange coincidence, the news of the Bushnell Token comes just days after Atari announced it was making two cryptocurrencies.

Vision Tree believes that a cryptocurrency is the fastest, most secure and most transparent way to achieve funding, as each token is recorded and lodged on a decentralised blockchain run by the backers themselves. Most intriguing of all, the blockchain itself will make backers part owners of the film. Their Bushnell Tokens will be unique and held in their own private digital wallets, and if the film does well, their value will increase. Backers will effectively enjoy a share of the profits.

“The option of an ICO has been very disruptive to the venture capital community and traditional financing methods, while it’s been very beneficial to us. Entertainment companies can engage directly with their audience and crowdsource financing at such a great scale now. We’ve seen success with our own films, namely Sirius, and we’re seeing many successful film projects continue momentum and traction through an ICO. We’re excited to be one of the first to utilize an ICO and a cryptocurrency to engage with audiences and finance a film in this way.” - J.D. Seraphine, cofounder of Vision Tree

Moving forward, Vision Tree says that owners of Bushnell Tokens will also be able to have an active vote in key parts of the filmmaking process, including casting and trailer releases. However, no date for when the Bushnell Token ICO will begin has been announced.

It’s certainly an intriguing approach to getting a film off the ground and one we do hope works. Not only do we want to see the film, but cutting out the middleman between fans and creators when it comes to crowdfunding sounds like a win-win. It’s also great to see Nolan Bushnell continuing to be a name attached to the very latest and greatest evolutions in entertainment.