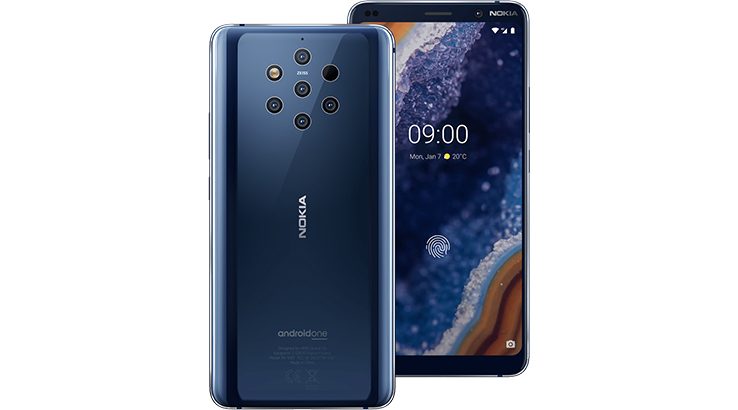 With 5 rear lenses you can expect superior photographic quality out of Nokia's new flagship, and at a surprisingly decent price.

At Mobile World Congress in Barcelona today, Nokia has revealed its new flagship phone, the Nokia 9 Pureview. Nokia's taking on the established players in the smartphone space with the Nokia 9 Pureview on camera terms, with an astonishing 5 sensor camera array at the rear of the phone.

Nokia (or to be strictly accurate, HMD Global, the folks who own the licence to produce "Nokia" branded phones) is leaning heavily on its alliance with ZEISS optics for those 5 cameras. They're all 12MP f/1.8, with 2 RGB and 3 monochrome sensors to play with.

Nokia says that it's the first smartphone camera able to capture images at different exposure levels simultaneously, which opens up a lot of photographic possibilities for this very camera-centric handset.

The combination of those lenses allows for a capture of up to 240MP, which is, frankly, pretty insane for a smartphone. You're not likely to want to make too many 240MP captures though, as while the Nokia 9 Pureview comes with 128GB of storage, it doesn't support microSD expansion.

The point of captures at that size is to downsample to a more manageable picture size while retaining fine quality. It's also why none of the Nokia 9 Pureview's sensors have telephoto features, because you can simply capture a super-high resolution picture and digitally "crop in" for the same effect, at least in theory.

Despite the presence of so many camera lenses on the Nokia 9 Pureview, the back is entirely smooth, so there's no noticeable "camera bump". It's also yet another phone without a headphone jack, although Nokia says it will include an adaptor for those who prefer wired headphone usage.

Outside of the camera, one interesting step that Nokia has taken with the Nokia 9 Pureview is the choice of processor. The processor of choice for Android flagships in 2019 is pretty clearly the Qualcomm Snapdragon 855, but Nokia has opted for 2018's Snapdragon 845 instead. That should still give the Nokia 9 Pureview plenty of processing power, but it won't be quite as quick for regular app uses as some other flagship phones.

The Nokia 9 Pureview will unlock via an in-screen fingerprint sensor, sitting behind its 5.99 inch 2K OLED screen, and it's an Android 9 ("Pie") handset. As with the majority of Nokia's other Android phones, it's an Android One device, which means that updates and security patches are essentially handled by Google itself, and you're guaranteed OS updates for at least two years.

Nokia expects the Nokia 9 Pureview to start shipping in selected markets from next week, but there's no word as yet regarding precise Australian availability.

Expected US pricing is just $699, which raises the possibility that (based on current exchange rates) the Nokia 9 Pureview could hit our shores just below the $1,000 price point. With so many premium flagships sailing north of $1,500 outright these days, that could make the Nokia 9 Pureview even more compelling.