The Nokia 9 Pureview's multi-camera approach makes it stand out from other premium smartphones, but this isn't a phone for everybody. 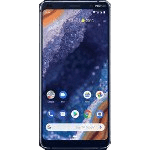 We're at a stage in smartphone development where most manufacturers don't really take risks. New phones are largely iterative, and while the technology improves in small steps, there's not really much in the way of genuinely new and risky ideas out there.

Without a doubt, the Nokia 9 Pureview is HMD Global's most interesting phone to date. Interesting, however, doesn't lead to a phone that will necessarily appeal to every single buyer.