HMD Global, the company with the rights to produce Nokia-branded phones, will bring the fourth in its series of Nokia 1 phones to Australia in early May 2021. Like its predecessors, it's a low-specification, low-cost phone, but HMD is clearly hoping it can hook in price-conscious consumers with the use of the lightweight Android Go operating system and guaranteed security updates. One of the nicer aspects of Nokia phones is typically the design, but for the Nokia 1.4, HMD Global is keeping it simple. At the front, you'll find a 6.51-inch 720p-capable LCD with a teardrop notch to house the front-facing camera. At the rear, there's a choice of either black or blue finishes – or in HMD marketing-speak, "Charcoal" or "Fjord". Either way, it's a plastic body phone, which is totally in line with what you'd expect at this price point.

You also get a standard rear-mounted fingerprint sensor for unlocking; while we've seen some makers play with pushing in-display sensors into their cheaper phones, it's arguably wiser to opt for a separate touch sensor in this price bracket as the processing needs of those glass sensors can lead to slow unlocks or missed authentications. Basic phones only get basic cameras, right? Well… not so much anymore. What we've seen as premium and mid-range cameras have gone from strength to strength are a number of budget phones adopting some of their features and sensors along the way.

The Nokia 1.4 is a good example of the type, actually. At the rear, there's a primary 8MP sensor for most of your shots, paired with a 2MP macro lens for close-up work. At the front, under that teardrop notch, lies a rudimentary 5MP selfie camera.

That's where the use of Android Camera Go, Google's low-power camera app could give the Nokia 1.4 something of a camera edge, even with moderate specifications. However, we'll have to wait until we can put the Nokia 1.4 through its full paces to get a more complete picture of how it compares. Stay tuned. 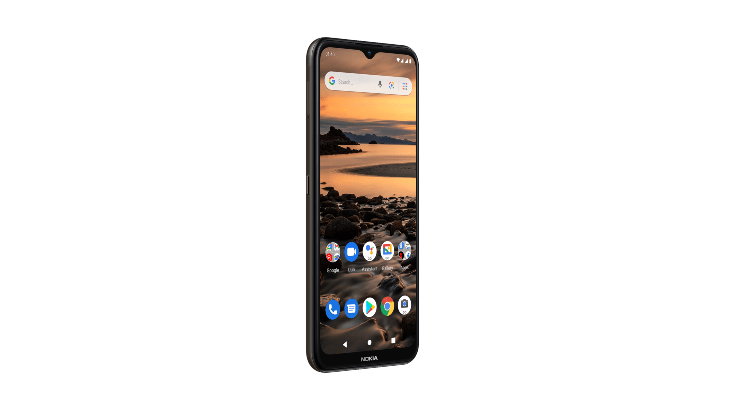 The underlying recipe for the Nokia 1.4 is one of low-cost and compromise, which is a very common story in the sub-$200 space. Specifically, it runs off a Qualcomm Snapdragon 215 processor, with the model as sold in Australia shipping with 2GB of RAM and 32GB of onboard storage. There appears to be some RAM variance in international models, with 1-3GB RAM available, so it'd be wise to ensure you're getting the model you think you are when shopping online for one.

Still, it's a low-power combination even at top specification, so it'd be wise to temper your expectations. Like prior Nokia 1 phones, the Nokia 1.4 doesn't use full-fat Android, but instead the specially optimised "Android Go" variant designed for low-power handsets. That means you get optimised Go versions of most of the core Android apps, although you're not limited to using only those apps. Any Android app can (in theory) be installed, although more intense games or video editing apps may not run well, if at all.

HMD Global is also pitching the Nokia 1.4 as a phone that parents can buy for their children. It comes with a range of built-in parental controls, so you can safely monitor your child's mobile phone usage.

One of the big drawcards of the Nokia brand since the first Android Nokias emerged a few years ago has been its upgrade story. Here, the Nokia 1.4 doesn't impress quite as much as the other Nokia phones that typically sit under the "Android One" umbrella. That means that those phones get three years of Android updates, both security patches and full updates.

The Nokia 1.4 is guaranteed for three years of security updates, but all HMD Global has announced is that it's "ready" for Android 11 (Go Edition). There's no word on when that will be made available or whether the Nokia 1.4 would see Android 12 (Go) or further. The Nokia 1.4 features a sealed 4,000mAh battery, which is moderate by modern smartphone standards. You don't have to spend too much more for a larger battery, but that's not always a guarantee of better battery life. As always, battery life is a complex equation of usage, screen size, processor speed and optimisation.

Here the Nokia 1.4 might slurp up more power thanks to that 6.51-inch screen, but then again, it may conserve more with a slower processor and the optimisations built into Android Go. We'll have to wait and put it through its battery paces when we get a review unit in to test.

One annoying aspect here is that HMD Global has stuck to the older and less easy to use microUSB standard for charging the Nokia 1.4. We've seen some makers in the budget space switch to the more convenient USB-C standard and its reversible plugs, so it's a pity that HMD Global hasn't yet made that change.

Could be a budget bargain

Any budget phone involves compromise because what you're really prioritising when you buy one is the low asking price. While there are weaker aspects to the Nokia 1.4's makeup on the surface, there's also some hope for it delivering better than expected performance thanks to the smart use of Android Go. HMD Global simply doesn't tend to clutter up their phones with useless additional software or interfaces, and they're all the better for it.

We'll have to save our full judgement on the Nokia 1.4 once we've had some time to test out an Australian unit.

The Nokia 1.4 will go on sale in Australia for $169 outright in either Charcoal or Fjord finishes from 9 May 2021. At that price point, it's not likely to sell through any carrier partners on contract, but it's feasible some of them may pick it up as a prepaid handset, although we've not heard any details of that as yet.