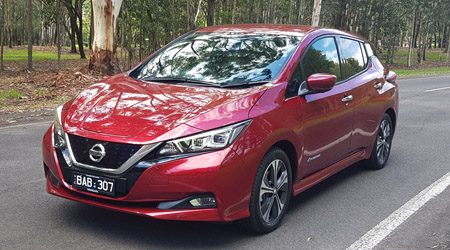 The unpretentious, sensible electric car for the masses?

As virtually every manufacturer scrambles to get its ducks in a row and produce an electric vehicle, Nissan has been well ahead of the curve with the Nissan Leaf. It was originally launched in 2013 and the version you see before you in this review is the latest iteration, the Nissan Leaf 2.

Now we can hear you asking, but does it have a "Romance Mode" like the Tesla?

There are no virtual fireplaces, nor Marvin Gaye (as standard) on the Nissan Leaf 2, but don't stop reading now: this still may be the electric car for you – after all, it is the world's best-selling electric vehicle.

Inside the Leaf you get nice, comfortable leather seats throughout the vehicle, with both the front and rear rows having heated elements. Not very often you get to say that. As the driver, you have electric adjustability to get comfortable, with your passenger using the traditional handle and wriggle method of moving the seat around.

There is a single-zone climate control system, and an eight-inch touchscreen infotainment system. It comes with Apple CarPlay and Android Auto and is linked up to a quality seven-speaker Bose audio system. In a car this quiet, the Bose system really does come into its own – a great addition by the team at Nissan. In terms of layout, the central control system is laid out logically and everything is where you would expect it to be underneath the infotainment screen. With that being said, you can't help but feel that some of the switchgear, the heated seat buttons for starters, were dug out of the leftovers bin from vehicles less futuristic than the Leaf.

If a surface isn't wrapped in leather, it is a soft-touch material and retains stitching across it – which helps to add that more premium feel to the little EV.

If you plan on carting things around in the Leaf, it has 405 litres of stage space available in the boot. It isn't too bad of a configuration dimension wise; however, it is impinged by the Bose audio system. Surely there was a better place for that?

But, if some of the "things" you're carrying are kids, you're in luck because there are two ISOFIX mounting points and three top-tether points for the rear row. 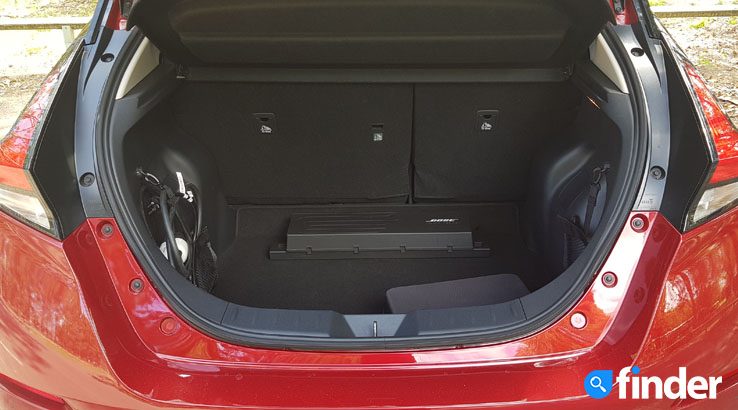 Quiet, first and foremost. When you jump in the driver's seat you will see there is no "start" button, but a power switch to get the vehicle up and running – how futuristic is that?

You kick the hand-brake off and use the very futuristic shift selector to throw it into the single gear and you're on your way. Cruising down the M5 in Sydney, you notice that the ride is forgiving and the softer set-up lends itself to a family vehicle.

Once you are out of the traffic and get a chance to put your foot through it, you'll find that the Leaf is surprisingly quick. It feels like the Leaf can get to 100km/h quicker than Nissan suggests and continues to climb just as quickly.

Which brings me to two issues.

The first being that the driving position is slightly higher than you would imagine. Which when you look at the sales charts, is great. Everyone loves SUVs with their high driving position, but it doesn't work on the Leaf. That's because with no engine noise, you lose the sensation of speed. Cruise along in a 60 zone, look down and you'll see you are doing 70 or 80. You just don't realise.

The second: When you do look down to check your speed, there is no digital speedometer. It might sound a bit first-world-problem-ish, but this is a car that sets you back the better part of $50,000 and is supposed to be the car of the future and save humankind – it should have a digital speedometer! (On a side note, if there is one there, I couldn't find it.)

Back to the power though. The Leaf is capable of producing 110kW and 320Nm of torque which is on-tap instantly. The battery fitted to the vehicle has a range of 270km but there were times I questioned this. In the 30-odd kilometres home from picking the vehicle up, it had sucked up 13% of the battery. Granted this was in a bit of peak-hour traffic, but still.

If you are just using the car for trips like this, and not travelling extended distances, this shouldn't be an issue. We ran the battery down to 21% and threw it on charge at a normal DC socket at around 8pm and woke up to a full charge. It took the Leaf from 8pm until 3.31am to develop a full charge.

The take-away here? Chuck it on charge every night.

The Nissan Leaf also boasts the ability to recharge its 40kWh lithium-ion battery on the go and as a result, an "e-Pedal" is a prominent feature in Nissan's marketing material. The e-Pedal, which needs to be switched on, allows you to accelerate and stop the vehicle without the use of the brake. You adjust pressure on the throttle and completely release it to speed up, slow down and stop the car.

It takes some getting used to, and I personally found the brakes to be a little too aggressive when backing off the throttle (better than the alternative, I know). I found myself just using the tried-and-true brake pedal for the majority of my time with the vehicle – this still regenerates the battery.

You also get a digital display showing if the vehicle is expelling energy or regenerating the battery at any given time.

As mentioned, the Bose system complements the Leaf well. The cabin is fairly well insulated with only slight tyre noise noticeable at higher speeds, so all audio is uninterrupted and clear. 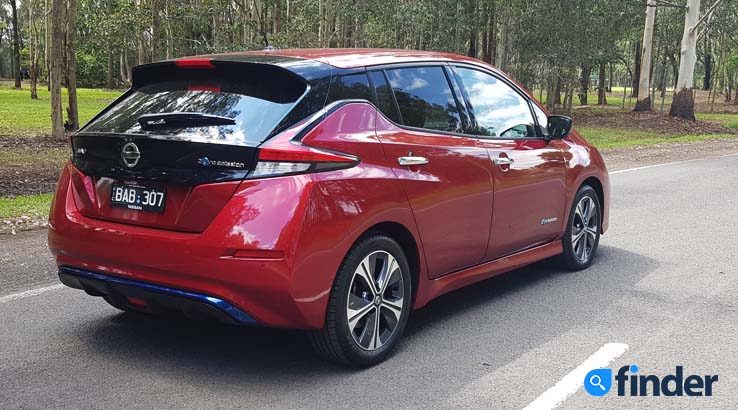 The Nissan Leaf scored a 5-star ANCAP safety rating when tested and comes with a good suite of safety technology. The safety suite includes:

If you are looking at purchasing an electric vehicle, you should of course check out the Nissan Leaf. You will find that it is comfortable, well-riding and packs plenty of mumbo. It's also good to know it will charge at least 80% overnight on a normal DC socket.

I really wanted to be able to say the Nissan Leaf changed my opinion of electric vehicles in Australia's current automotive landscape, but unfortunately, it hasn't this time around – it is a good car, but there are other models out there that offer better ranges.

I am looking forward to seeing what Nissan and this wider segment produces in the near future.