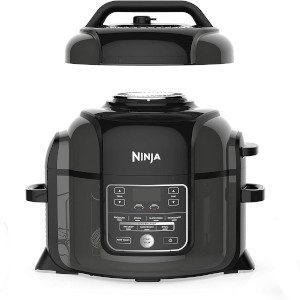 From slow cookers to air fryers, any appliance claiming to shorten time spent in the kitchen is becoming a hot commodity for our time-poor society. Which is why I was excited, if not slightly overwhelmed, to try out the Ninja Foodi. The nifty cooker doesn't just operate as one cooking appliance but instead incorporates just about all of them.

An amalgamation of a pressure cooker, slow cooker, air fryer, griller, steamer and roaster, there isn't really a whole lot that the Foodi isn't able to do. But is it worth forking out for, or should you simply purchase the appliances that you will use the most? Well, that depends.

Where to buy it: The Good Guys, Myer, Bing Lee and other kitchen appliance stores.

The Ninja Foodi is actually quite simple to use even if, like me, you haven't used a multi-cooker before. The appliance comes with an easy to read instruction guide and cheat sheet that will help you determine which setting and temperature you need for each type of meal.

With the inclusion of only the most basic of buttons like temperature, time, function and a power switch, the Foodi is also pretty hard to get wrong. Just plug it in, press the on/off button, select your cooking mode and let it heat up. The Foodi will then suggest an approximate time and temperature setting, which you can then adjust using the up and down arrows. 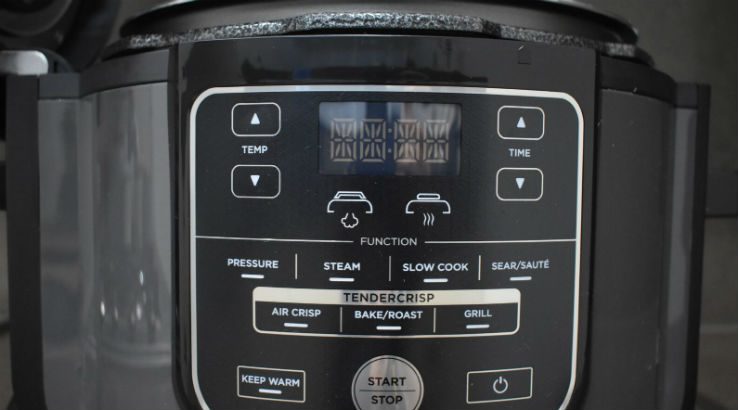 Inside, the cooker contains a 6.1L capacity cooking pot. You can use the pot on its own or with the included Cook & Crisp basket, depending on which function you are cooking with. 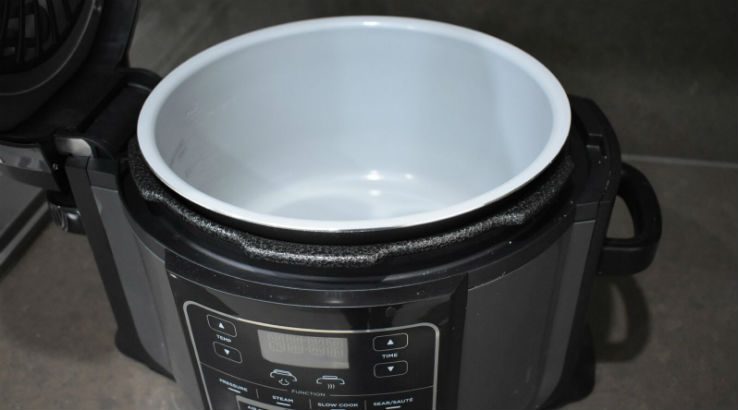 Also included are two different types of lids. The attached lid is made for the Air Crisp, Broil, Roast and Dehydrate functions, while another lid is used for the Pressure, Steam and Slow Cook functions (it can also be used with the Sear/Sauté function).

To attach the pressure cooking lid, you need to align the unlock symbol on the lid with the dash line on the unit. You then have to rotate the lid clockwise until it clicks in place and the line on the cooker aligns with the lock symbol. While cooking with this lid on, there is a safety feature that will stop you from unlocking the lid until the pressure has been released. This is a great addition for those not yet used to pressure cooking.

Why you'll love it

With just about every Auto-iQ program you could need to create your meals, the Ninja Foodi eliminates the need to purchase, store and master multiple appliances. The guesswork is also taken out of using each program as both the temperature and cooking time is suggested for you as soon as you select a cooking mode, though these can both be adjusted if needed. Better yet, the Foodi also comes with a "cheat sheet" chart that tells you the best temperature and time allotment for cooking everyday foods.

Whenever I was running short on time, or cooking for more than just two people, I also found that the Ninja helped to make meal preparation more bearable. For instance, you can air fry multiple burger patties and have them perfectly cooked through within 15 minutes. Better yet, there's no need to stand there flipping them – you can simply put them in the crisp basket and get on with preparing the rest of the meal. 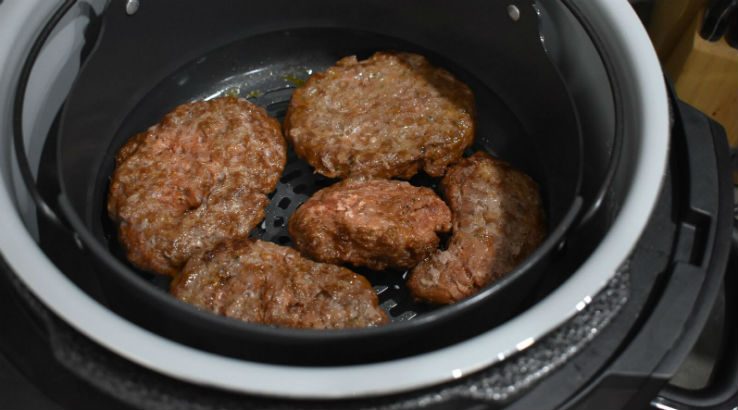 In terms of clean up, there's a lot to love there too. As well as reducing your dishes down to one pot, both the cooking pot and the crisp basket are dishwasher safe, which is definitely something that I appreciate.

Possibly my biggest issue with the Ninja Foodi was that you have to switch out lids depending on which cooking function you want to use. While this can't really be helped due to the nature of the product, it can be annoying when cooking something like French onion soup, which requires both lids at varying points.

The additional lid is also one more thing to find room for – and the Foodi does take up a fair chunk of room already. Measuring in at 43 x 36 x 32cms, this is a product that you'll need to dedicate most of a cupboard to. You can store both the cooking pot and the crisper inside, but you will need to find some extra room for the frying rack and the pressure lid. While it's fine for those with plenty of space, those with a smaller kitchen may want to measure their cupboards (and bench space) before shopping.

As someone who is quite time-poor and doesn't enjoy spending large amounts of time in the kitchen, I would definitely consider the Ninja Foodi worth the investment. From being able to throw a bunch of ingredients in the slow cooker and get on with things around the house to being able to quickly cook meat and frozen ingredients, the multi cooker really does simplify meal preparation and save you a lot of time in the process.

Admittedly, you probably could buy all the products it encompasses for less separately, but there's definitely something to be said for the convenience of having an all-in-one product. It does take up quite a bit of room, which is definitely a consideration for those without a lot of bench or cupboard space. If you consider how much storage space you would need for multiple appliances though, it still comes out on top as the more convenient option for most.

Where you can buy it

You can shop the Ninja Foodi from a range of department and home appliance stores including The Good Guys, Myer and Bing Lee.

Retailing for $399, the price point of the Ninja Foodi isn't actually too bad. While it may not work out to be much cheaper than buying each appliance separately (in fact it may work out to be more expensive depending on which brands you buy), it's worth the price for the convenience of not having to house multiple appliances.