Quick verdict: Nextbase's premium dash cam does a great job of recording car-based video and audio, but its app support is less stable than we'd like, despite its impressive feature set. 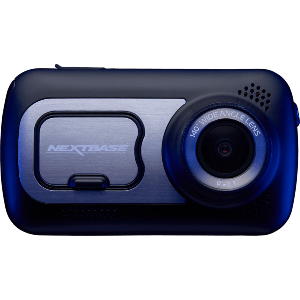 There's no shortage of dash cams on the market, but Nextbase's 522GW offers an intriguing range of features, from 1,440p video at 30fps to integrated Alexa connectivity and SOS calling in the event of the worst happening when you're driving. It's a good package of features, although your use of them can prove a little trickier than we'd like. 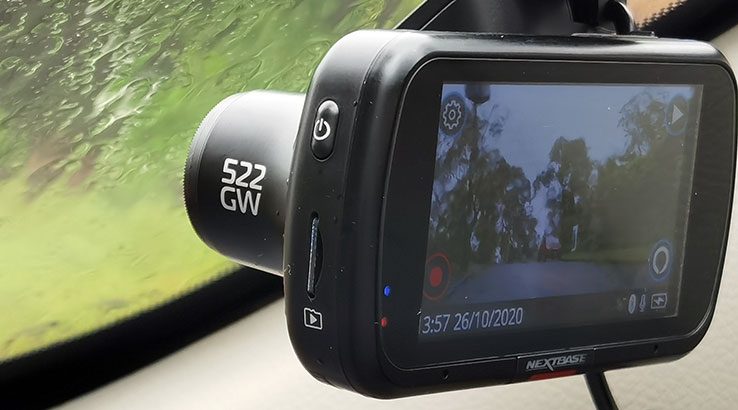 The Nextbase 522GW camera module is built around a 3-inch IPS touch screen sitting behind a camera capable of shooting at either 1,080p/60fps or 1,440p/30fps. That 60 frames per second sounds tempting, but I've found the higher resolution on that 1,440p recording more useful overall. That's because in most situations what you need a dash cam for is largely accident monitoring, and in the event of such a situation arising, having crisper video that can be split into frames to grab licence plate details or other information is likely to be slightly more important than having specifically smooth video.

The 3-inch display acts as a touchscreen, and aside from that the Nextbase 522GW features power and microSD card slots on the left, looking from the display side, while the top houses a mini USB socket for computer connection, and a right side micro HDMI socket for TV connectivity.

Like most dash cams, the Nextbase 522GW is designed to mount to either the dash or front windscreen of your car, depending on your tastes and car layout. Nextbase provides a modular mounting system with the choice of either a 3M sticker mount or compact suction cup mount.

You'd choose the former if you were placing it in a car you expected to keep for a long period of time, while the suction cup mount gives you a degree of portability. Either way, the modular system that Nextbase has in play hooks up the power supply for the 522GW dash cam and can be clicked out from either the 3M sticker or suction cup mount part. That gives the Nextbase 522GW plenty of flexibility if you did need to use it across multiple vehicles, of course.

The magnetic mount might make some worry about whether the Nextbase 522GW will stay up on your windscreen or dash in the worst circumstances, but the reality here is that the magnetic lock is very powerful. I've had more of an issue accidentally removing the suction cup from the screen when unclipping the Nextbase 522GW than I have worries about it falling off accidentally. 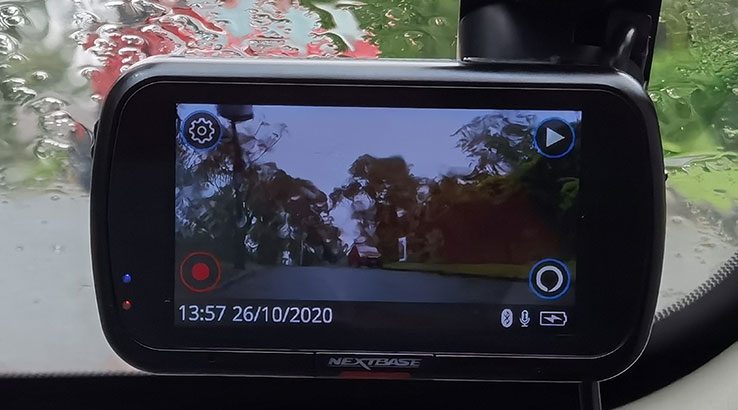 The key reason you buy a dash cam is to record your own driving, and it's a market that's predominantly sold on safety, even though wacky dash cam videos are a YouTube sensation of their own.

Here the Nextbase 522GW scores well, with either 1,440p/30fps or 1,080p/60fps video recording that kicks in automatically when you start your vehicle and the power comes on, only pausing if it works out via GPS that you've parked your car. By default, and like most dash cams, it records to a microSD card – Nextbase sent me a branded SD card for test purposes but any Class 10/U3 card should work. Recordings are looped and not stored unless the Nextbase 522GW detects some kind of bump or other unusual motion that might signify an accident, at which point recordings are stored in a specific protected folder on the SD card.

Actually driving around and using the Nextbase 522GW across Sydney for a couple of weeks allowed me to put it through its testing paces in day and night driving situations, including some bad weather. In video quality terms the Nextbase 522GW acquits itself very well, capturing great quality video that you could use for any given purpose. Here are some stills captured from actual live video, with only the licence plates post-blurred by me in the interests of privacy. 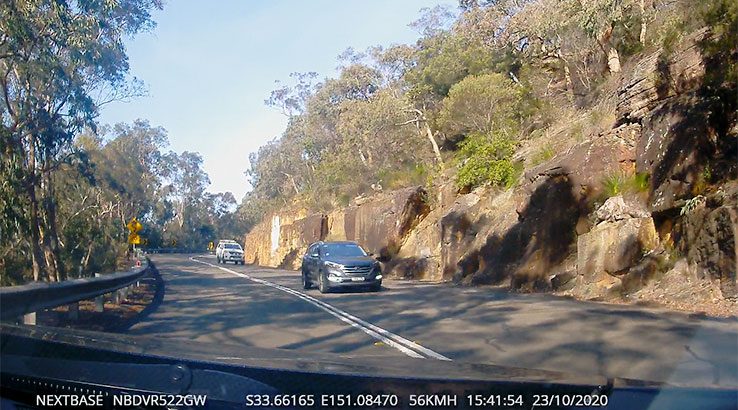 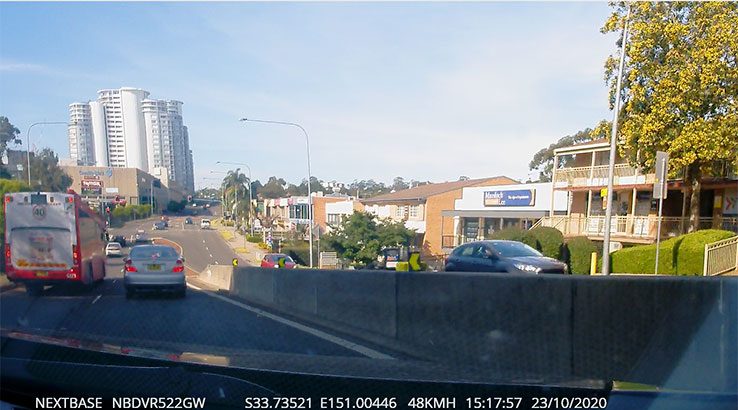 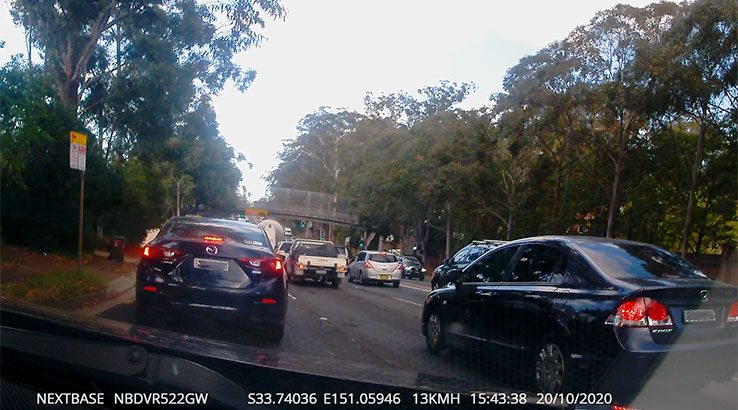 You naturally lose a little detail in very low light. 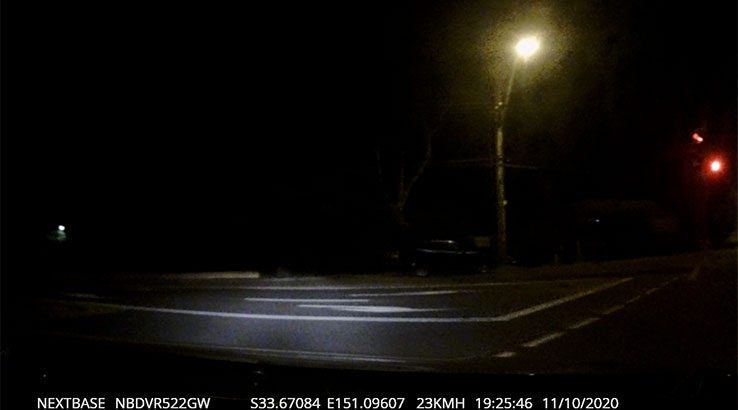 Where the Nextbase 522GW is meant to stand out is via the use of a dedicated smartphone app and compatibility with Amazon's Alexa assistant. That enables potentially valuable features such as SOS calling, which will contact emergency services if the dash cam detects an accident and you don't respond on your paired phone, as well as Alexa-based voice control for features like starting or stopping recording, plus using the Nextbase 522GW's microphones to actually pick up other Alexa voice commands. That's an easier approach than running a dash cam and the Amazon Echo Auto, or at least it should be.

There are a number of issues with the app-based approach of the Nextbase 522GW. For a start, you can only pair a single phone to the dash cam, which isn't great if you're in a household where multiple drivers use the same car and you want recordings and access all the way. Pairing is also rather slow, and sometimes plain just doesn't work, especially on the Android devices I tested with. For whatever it's worth, iPhones had less of an issue.

There is a workaround for this: while Nextbase insists you have to install and use its app and only pair that way, for some Android phones such as the Pixel 5 where the app just hung not finding the dash cam sitting right next to it, I found I could easily pair directly through the regular Bluetooth menu on the phone and then return to the Nextbase app to get the process working.

I wasn't quite willing to crash my car to test out the Nextbase 522GW's SOS feature – or for that matter waste the time of a 000 operator doing so – but that's a potentially lifesaving feature, and one that's quite welcome at least in a theoretical sense. Because it's actually linked to an operator, it's a paid service with a 1-year free trial for new Nextbase 522GW owners.

Alexa integration could be useful to a small extent, although it relies contextually on the Nextbase Skill being installed and authorised with your dash cam's serial number. This is where the Nextbase 522GW absolutely failed on me; no matter what I did, it wouldn't accept the serial number the dash cam insisted it had, and so I couldn't get Alexa up and running on Android. On iOS I could get it installed… but it ultimately just didn't feel all that useful at all.

You can tell Alexa to take stills or start or stop recording in a hands-free way, which is obviously legally smart, but I can't quite see the situation where that's all that functionally useful anyway. If you have the optional rear vision camera you can switch your view there, which could be handy as a reversing camera of sorts, although positioning could make that less distinct than you'd like, especially when it's only on a 3-inch display. I didn't have the rear camera to test so can't comment beyond that, sadly. I can't quite see why you wouldn't want to record and need voice control for that – I mean, who puts a dash cam in their car in order to not record most if not all of the time?

Should you buy the Nextbase 522GW Dash Cam?

Hopefully Nextbase continues to improve its app's pairing and synchronisation features, because there's definitely a market and an argument for a high-end dash cam that can work with the features and connectivity of a smartphone. The Nextbase 522GW's app is the unit's weak point, and right now it's not the best, especially on Android platforms.

That being said, at its core job of being a dashcam, the Nextbase 522GW performs well at recording and storing high-quality visuals of your trips across a variety of weather and lighting types.