How to celebrate in style along the Brisbane River this New Year's Eve.

The end of December will be here before you know and we've got the goss on what's on to make sure this year goes out with a bang.

Brisbane's calling card and crown jewel is the Brisbane River. It's flanked on all sides by swanky bars, high-end restaurants, hotels and Brisbane's vibrant nightlife scene.

It also lights up every New Year's Eve with a spectacular fireworks display and a range of activities and parties for young and old.

Find out where it's at in Brisbane this year with our guide.

When and where to watch the Brisbane NYE fireworks

Brisbane's fireworks are set off all along the Brisbane River. Due to the snaking nature of the river, there are numerous vantage points you can stake a claim to to catch the night-time sparklers. Here's the lowdown:

There are two fireworks displays, both viewable from the above vantage points:

What else is happening at South Bank Brisbane for New Year's Eve?

South Bank is where all the action happens, from festivities to views of the kids and midnight fireworks.

Celebrations start from 11am along the Cultural Forecourt with food trucks and entertainment a plenty.

Get your bearings and mark your spot early using the map provided.

In 2018, Westfield Chermside in Brisbane's northside hosted a family-friendly NYE event. On top of live entertainment, face painting and dining specials, it boasted a balloon drop at 8:30pm and fireworks at 8:35pm for the littlies to get in on the action before tucking in. This year's event is yet to be confirmed.

Where are the best spots to watch the New Year's Eve fireworks?

With fireworks being launched from different sites along the river and from barges, the New Year's Eve light display is one not to be missed.

No food or drink for sale

What to do on New Year's Eve in Brisbane

Fireworks views don't get much more front row than on a boat on the Brisbane River. Ring in the new year under stars with one of these New Year’s Eve river cruises. 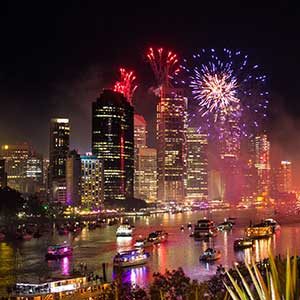 What's on? The New Year's Eve parties and events in Brisbane you'll want a ticket to

Send the year off with a bang by booking a ticket to one of the hottest parties in town. From adventurous activities to fantastic festivals, Brisbane ias it all.

Royal on the Park Hotel

What is New Year's Eve's weather in Brisbane?

31 December is generally a warm one for Brisbane, boasting clear skies and temperatures in their mid-20s to 30s.

What are Brisbane's NYE road closures?

Many of Brisbane CBD's roads close, some as early as 8am on 31 December. Check the Departure of Transport and Main Roads' site before heading out to keep on top of specific road closures and times.

Where can I catch the Brisbane New Year's Eve fireworks live stream?

Details of Brisbane's New Year's Eve live stream have yet to be released. We'll update you with the latest as it comes in.

Alex Keshen is Finder's global travel publisher. Working in the travel content and deals space for more than 10 years, she has appeared in Travel Weekly and the Huffington Post. After graduating from Ryerson University in Toronto, Canada with a Bachelor of Journalism and settling into a career in travel publishing, Alex has become a master of maximising her annual leave and finding the best bargains around.

Alinta Energy and AGL compete closely on price in many states.

Find out which gas retailer is the better choice in Western Australia.

Origin vs Simply Energy: Which brand offers better electricity rates in your state?