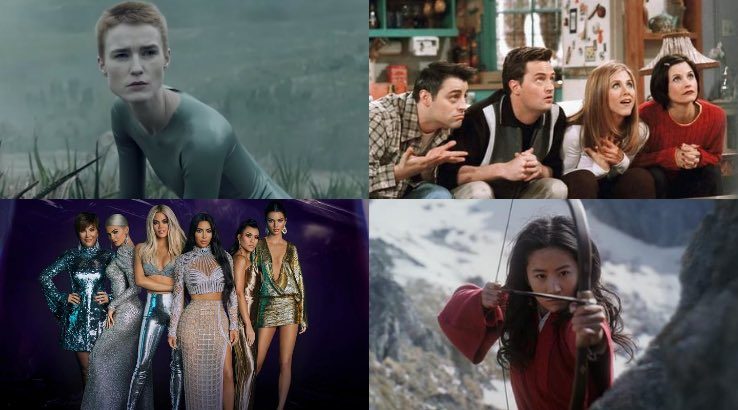 From docos to highly anticipated movies and from returning shows to intriguing fresh series, September has something for everyone. Whether you've been waiting forever to finally stream Greta Gerwig's Little Women from the comfort of your living room, catch new episodes of the addictive superhero series The Boys or – drumroll! – are willing to pay extra to be one of the first people to watch Disney's live-action Mulan, you'll have plenty to look forward to this month.
Jump straight to the list
Not to mention the fact that all seasons of Friends will arrive on BINGE, Foxtel and Netflix, so you might want to squeeze in a re-watch. Here are some of the Australian streaming highlights for September.

Over at Netflix, the streaming giant is holding nothing back when it comes to new releases. We're especially excited for movie I'm Thinking of Ending Things, an adaptation of the haunting novel of the same name written by Iain Reid. And for The Devil All The Time, a psychological thriller starring Tom Holland, Bill Skarsgård, Sebastian Stan and Robert Pattinson, among others. Oh, and for Enola Holmes, which revolves around Sherlock's teen sister, played by Millie Bobby Brown. The cast also includes Henry Cavill, Sam Claflin and Helena Bonham Carter. When will we ever find the time?

On the original series front, you might want to check out Away, a sci-fi drama starring Hilary Swank as a woman who leaves behind her family to embark on a dangerous mission to Mars. You should also keep an eye out for Ratched, which sees Sarah Paulson transform into Nurse Ratched, the infamous Stephen King character from One Flew Over the Cuckoo's Nest. Other notable additions in September include The Duchess, Young Wallander and Julie and the Phantoms.

As far as Stan is concerned, you should buckle up for new episodes of PEN15, A.P. Bio and New Amsterdam. Fresh series Power Book II: Ghost premieres on 6 September. The spin-off picks up shortly after the earth-shattering events of Power as Tariq St. Patrick grapples with a new world order: his father dead and his mother facing charges for the murder her son committed. If you're into binge-watching, all Twilight movies will become available on Stan in September, along with all episodes of popular sitcoms Cheers and Everybody Loves Raymond.

Meanwhile, Amazon Prime Video is spoiling subscribers with season two of superhero drama The Boys, as well as new series Utopia, an eight-episode twisted conspiracy thriller about saving the world while trying to find your place in it. On the movie front, notable streaming releases include Little Women, The Lighthouse, The Gentlemen and A Beautiful Day in the Neighborhood.

Foxtel is also dropping some top-notch content this month. Ridley Scott's highly anticipated sci-fi series Raised by Wolves will finally hit the screen. It revolves around two androids who are tasked with raising human children on a mysterious virgin planet. We're also getting The Vow, a documentary that takes an in-depth look at the controversial self-improvement group NXIVM.

Little Women arrives on Foxtel as well, along with Birds of Prey and Bad Boys for Life. Reality fans should gear up for new episodes of Keeping up with the Kardashians, which show how the family dealt with lockdown (also available on BINGE and hayu).

Speaking of BINGE, we recommend the highly anticipated second season of Doom Patrol, about a rag-tag group of reluctant superheroes. You might also be interested in season two of Property Brothers: Forever Home and 2 Dope Queens. Raised by Wolves will be available on BINGE as well.

On Disney+, the service is offering subscribers the chance to stream the new live-action Mulan for an extra fee starting on 4 September. If you're not familiar with the beloved animated classic, the story follows a fearless young woman who risks everything to become one of the greatest warriors China has ever known. You should also check out docu-series Becoming and fantasy film Secret Society of Second Born Royals.

SBS On Demand highlights include The Good Fight season four, docu-series Hillary and season two of The Pier. The platform will also add seasons one to three of Wallander, seasons one to four of 12 Monkeys and seasons one and two of Killjoys, so you might want to clear your schedule.

Meanwhile, Acorn TV will release gripping BBC thriller Keeping Faith, about a woman who is drawn into a mystery when her husband and business partner disappears. New seasons of Doc Martin, Midsomer Murders and A Touch of Frost are scheduled to arrive on the service as well.