New on Netflix, Stan, Prime Video, Foxtel, Disney+ and SBS On Demand in May 2020 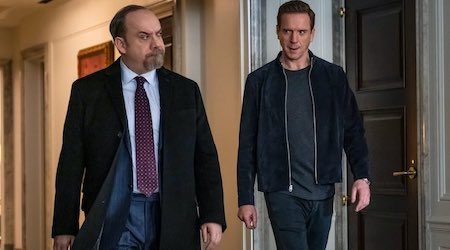 May is shaping up to be a good month to stay in and binge-watch quality media content.

What are you watching these days? Prestige dramas you never had time for before? Infectious comedies that make you laugh out loud? Addictive reality TV series that go great with a glass of bubbly? Whatever it is, get ready to update your watch list. May is bringing us a wide variety of fresh content to look forward to.

Netflix starts the month strong with new limited series Hollywood, coming from Ryan Murphy and Ian Brennan. The show follows a group of aspiring actors and filmmakers in post-World War II Hollywood and looks like a fascinating binge. The streaming giant is also releasing new seasons of Dead to Me, Magic for Humans, Selling Sunset, Bordertown and Dynasty. Plus, we'll be getting new weekly episodes of Rick and Morty starting 6 May.

Speaking of weekly series, Netflix will also be the international home of Snowpiercer, the highly anticipated series based on the film of the same name directed by Bong Joon-ho. The show stars Daveed Diggs and Jennifer Connelly, among others, and follows the passengers of the Snowpiercer, a perpetually moving train that circles the globe carrying the remnants of humanity. Snowpiercer premieres in the US 17 May, so it's likely to start arriving on Netflix shortly after.

Netflix also dropped some special news for Aussies to look forward to in the first week of May. Both Prison Break and Homeland are returning once more.

On the movie front, we highly recommend you tune in for The Lovebirds, which stars Kumail Nanjiani and Issa Rae as a couple on the brink of breaking up who gets unintentionally embroiled in a bizarre murder mystery. It arrives on 22 May. Or, maybe you want to check out Unbreakable Kimmy Schmidt: Kimmy vs. the Reverend, an interactive Kimmy special. The streaming giant is also premiering Jerry Seinfeld's hour-long special 23 Hours To Kill this month, as well as a new special from Aussie comedian Hannah Gadsby.

Disney+ is bringing out the big guns this month, with Star Wars: The Rise of Skywalker scheduled to arrive early on the platform, on 4 May. Tune in as the legendary conflict between the Jedi and the Sith reaches its peak, bringing the Skywalker saga to its end. May the fourth be with you!

Over at Prime Video, subscribers should keep an eye out for new comedy Upload, about a young man navigating the afterlife, and intriguing series Dispatches from Elsewhere, which follows the stories of four seemingly ordinary people whose lives are changed forever when they stumble onto a puzzle hidden behind the veil of everyday life. A new season of Homecoming arrives 22 May, this time around starring Janelle Monáe and set to further explore the inner-workings of the mysterious Geist Group.

Furthermore, the streamer is continuing to release Australian stand-up specials on a weekly basis. The roster of award-winning and nominated comedians for this month includes Lano & Woodley, Anne Edmonds, Tom Walker, and Tom Gleeson. On the movie front, we recommend Midsommar, Late Night and Zombieland: Double Tap. There are also several licensed shows scheduled to launch in May – most notably The Good Doctor, Timeless, Counterpart and The Goldbergs.

Meanwhile, Stan is keeping subscribers busy as well with new miniseries The Great, which follows the wildly comedic rise of Catherine the Nothing to Catherine the Great. Crime fans will likely be interested in Hightown, a drama revolving around a federal Fishery Service Agent who finds herself at the centre of Cape Cod's gruesome heroin epidemic after discovering a body in the bay. There's also Love Life, a rom-com series billed as an HBO Max Original starring Anna Kendrick, which premieres 27 May, the same day as the US.

Wanting more? The service will also premiere new episodes of popular show Billions starting 3 May, as well as drop new seasons of Ray Donovan, Line of Duty and Good Trouble. If you're looking for an exciting comedy, Seasons 1-3 of United States of Tara arrive 22 May. On the same note, Season 2 of acclaimed series Ramy premieres on Stan 30 May.

On SBS On Demand, get ready to laugh – all three seasons of underrated comedy Happy Endings arrive 2 May. New shows on the platform for May include ZeroZeroZero, Baghdad Central, Deliver Us and Made in Italy, to only name a few.

As for Foxtel, black comedy thriller series Run premieres 7 May. The show stars Merritt Wever and Domhnall Gleeson as two ex-lovers who activate a long-planned escape to disappear together. Spoiler alert: it has been getting excellent reviews so far.

More into period dramas? Check out Belgravia, a story of secrets and scandals amongst the upper echelon of London society in the 19th century. For a double portion of Mark Ruffalo, we recommend I Know This Much Is True, a dark miniseries following a man who revisits his relationship with his schizophrenic twin brother. Returning series on Foxtel in May include Aussie Gold Hunters, Deadliest Catch and The 100.