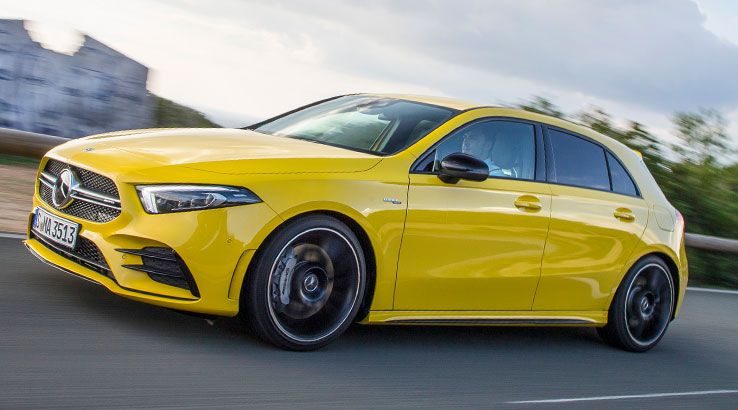 The new Mercedes-AMG hot hatch and performance sedan models are heading to Australia.

In September, Mercedes dealerships will receive deliveries of the new AMG A35 4MATIC hatch, which retails for $67,200. One month later, the A35 4MATIC sedan variant will arrive, with a recommended listing price of $69,800.

AMG is Merc's performance division, ordinarily taking their standard models and producing a more potent version. With the A35 4MATIC hatch and sedan, Mercedes says that AMG engineers had more input during the development of the A-Class. 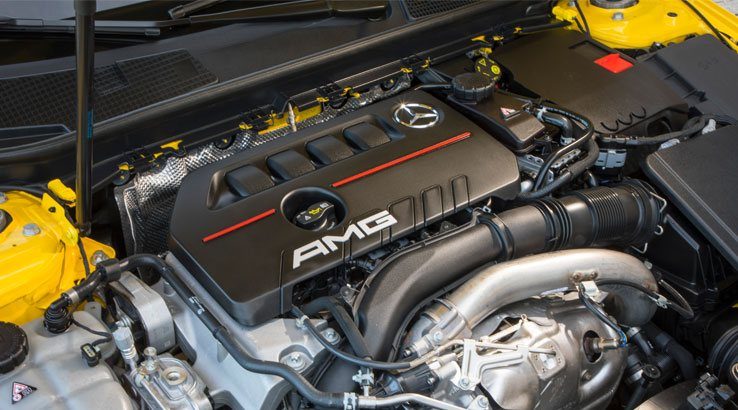 The cars' beating heart is a powerful 2.0-litre four-pot. With a twin scrolling turbocharger, power is a brawny 225kW, while torque measures a forceful 400Nm. This turbo design minimises lag at low-revs, but still generates a consistent delivery of power at all engine speeds.

Perhaps AMG's largest developmental contribution is the SPEEDSHIFT DCT seven-speed transmission. This gearbox gives the A35 all-wheel-drive traction and rapid cog swaps thanks to a dual-clutch mechanism.

Performance figures
The AMG A35 4MATIC propels itself from a standing start to 100km/h in just 4.7 seconds. The AMG electronically halts acceleration at 250km/h.

Other AMG tweaks that will make you feel like a road-going racing car driver include a launch control button and a performance exhaust system. Engineers also installed butterfly actuators to improve the exhaust note and back pressure.

Any car designed to be driven spiritedly must have a good set of anchors. The A35 4MATIC has beefy AMG brakes, with four-piston callipers up front for utmost clamping power.

AMG also invested a lot of work hours into the handling of the hatch and sedan models. The company says it was able to draw on their many years of motorsport experience for this. Masterminds tightened up the ride dynamics by strengthening the body shell. Even the underbody guards have been employed to further driver feel, as a lightened aluminium panel situated below the engine bolsters torsional rigidity. The steering knuckles are AMG-produced parts, with mounts for the radially bolted brake callipers.

The A35 also receives AMG's RIDE CONTROL, which includes selectable suspension modes and an automatic setting. The drivetrain has a similar level of adjustability. In some modes, the car will lock up an inside wheel to aid turn-in. 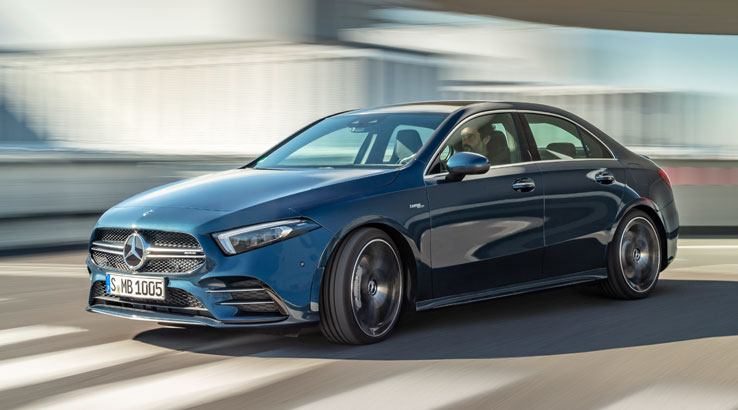 AMGs are usually unmistakable. The A35 4MATIC is no different. It receives aggressive styling cues like lower twin-finned vents, as well as other aerodynamically functional panels. Even the 19-inch alloys were designed with optimal airflow in mind. At the rear, a diffuser provides additional downforce, as does an AMG spoiler. 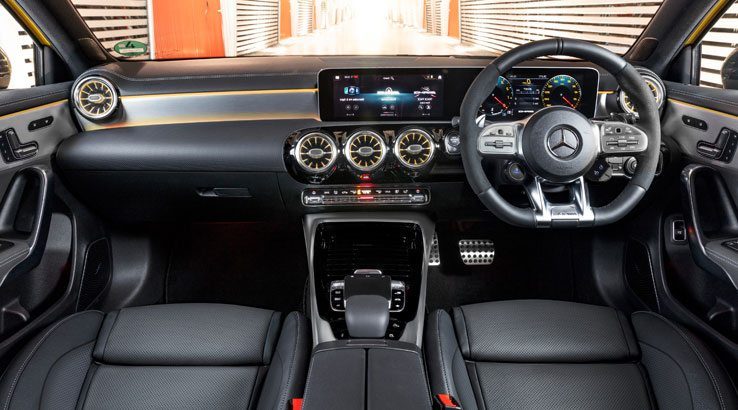 If you look inside a rally or F1 car, there's not a lot there. A steering wheel and some pedals. Maybe a shut-off button. Fortunately, the AMG isn't quite so sparsely adorned. Passengers will feel right at home due to perforated, Lugano leather, power-adjustable, heated seats. Mercedes also installed its MBUX infotainment system, with smartphone connectivity and voice control.

The driver has two LCD controllers on the steering wheel for adjusting vehicle settings as well as a dual 10.25-inch digital cockpit. Furthering the high-end interior is a mood-matching ambience ENERGIZING Comfort Control feature. There's even a gesture-controlled boot hatch.

For $6,990 extra, buyers can spec the A35 4MATIC with the limited time Edition 1 pack. It unlocks Tech Gold highlights on Denim Blue paint, with a black and grey interior that features polished aluminium trim pieces. There's also AMG Performance seats, an aerodynamics pack and multi-sale alloys.