New data shows business payment times are down, but only for some Businesses are getting better at paying on time, but that doesn't include almost 9 in 10 ASX-listed companies.

Late payments are becoming less of an issue for some businesses according to new research, falling 4.6% during the second quarter of 2017. However, the research from Dun & Bradstreet also revealed stark contrasts in payment times between industry, business size and business type.

Payment times have been a long-standing issue in the small business sector and relate to the length of time businesses take to pay invoices to other businesses. The average payment time for an Australian business is 14.6 days late.

Dun & Bradstreet's research found that ASX-listed companies were far less likely to pay on time, with only 12% paying promptly. This is compared to 34% of non-ASX listed companies.

Established businesses that had been in operation for two to five years had above average late payment numbers and businesses operating in wholesale, mining and retail were among the industries below the national average for payment times.

In regards to ASX-listed companies being less likely to pay on time, the report noted that this may "reflect the market size and power of ASX companies, which tend to be larger than privately owned firms".

Australian Small Business and Family Enterprise Ombudsman (ASBFEO) Kate Carnell welcomed the changes but said there is still work to do. Speaking specifically about the number of ASX-listed companies paying, she said it was very disappointing.

"Public companies should be leading by example...One of the biggest issues facing small business is delayed payments by big business and governments. Cash flow is king to small business; late payments can be the difference between success and insolvency," she said. 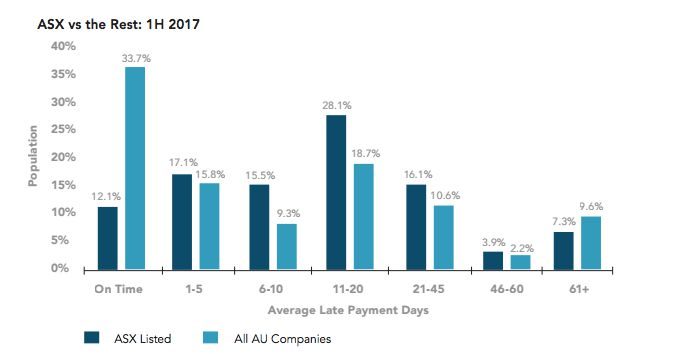 "ASX-listed companies report to public shareholders who demand strong balance sheets, healthy cash flows and top-line revenue growth to drive return on their investments. These priorities will always mean that ASX listed companies will always source cash flow from the cheapest source possible which often is their own supply chain."

An interesting trend revealed in the data was that once firms move beyond the startup phase into an established business of two to five years old, late payments are on average above the average for all businesses.

"This is a well-established trend even though the broad trends in late payments, higher and lower, are similar across all businesses," said Stephen Koukoulas, economic advisor at Dun & Bradstreet.

"It suggests that two to five-year-old firms are more vulnerable to cash flow constraints from higher late payments, which appears to have some impact on the trend in business failure rates."

COO of MYOB Andrew Birch says it's important to recognise the actual size of these businesses.

"Even though more established, businesses aged two to five years are often still smaller business and are contracted to longer payment terms such as 90 and 120 days, therefore often dealing with unfair payment practices by larger businesses," he said.

"These figures highlight the fact that cash flow pressure is a pain point for businesses, regardless of its age. It’s why prompt payment is so critical to the health of start-ups, developing or established SMEs."

There was a stark difference both in the payment times across industries and the year-on-year increases and decreases by sectors. Generally, the numbers showed that economic factors played a big part in this. 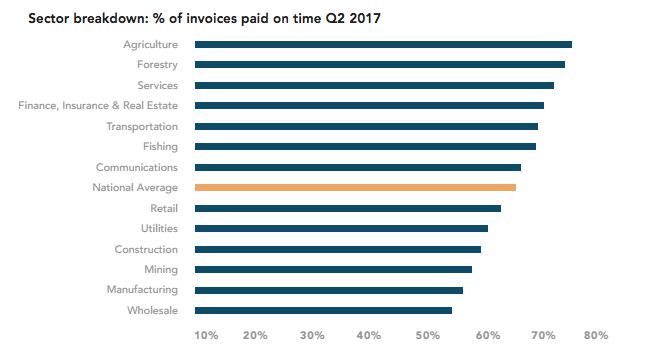 "Industries that have been enjoying more favourable trading conditions and in turn stronger cash flow, have been more receptive to the government lobbying for improved late payment terms," says Lamond.

"Industries that have not had the same level of prosperity like the energy and retail sector can't afford to be shortening payment terms as their cash flows are more strained. Unfortunately, no matter what lobbying and focus are put on this matter, big corporates will always use their supply chain as the cheapest source of cash flow."

On the right track

Arguably, the most important finding that came out of the research was that payment times are improving, albeit slowly. On average, 63.8% of Australian businesses paid their bills on time. Birch says he was not surprised by this result.

"Initiatives like the Business Council of Australia’s Australian Agency Supplier Code – which encourages members to pay invoices within 30 days – have played a major role in addressing cash flow issues all businesses face. At MYOB we have led the charge to establish this prompt payment protocol and implemented it as policy to our suppliers months before it was officially launched."

For Lamond, economic conditions coupled with government lobbying means this result came as no surprise to him either. But he will be interested to see if the numbers can be maintained.

"Kate Carnell and the Business Council of Australia have done great work shining a light on this issue, but the impact will be short lived if systemic changes with regard to policy, technology and processes do not continue to be adopted within the supply chain of large corporates."