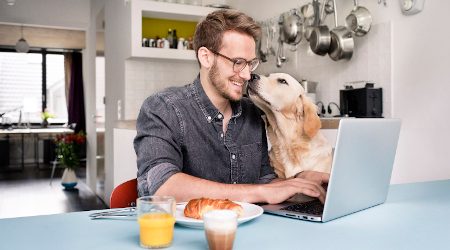 NBN Co is keeping its 40% capacity boost live through to 19 August, which is good news for your home Internet connection stability.

Update from 4 September 2020: NBN Co will be extending its capacity boost for a third and final time. Internet download figures are still at an all time high, with the second wave of coronavirus across the country, particularly in Victoria, adding to more demand on the network. The extra 40% CVC will now be available until 30 November 2020.

As Australia emerges from the most stringent of its coronavirus lockdown measures, NBN Co has announced, somewhat surprisingly, that it's going to keep the 40% capacity boost for ISPs that it first announced back in March active through to at least 19 August 2020.

In addition, customers on the satellite portions of the national broadband network on standard Sky Muster plans will see a doubling of their data quota from 45GB to 90GB continue to at least that date.

As always, NBN Co is a wholesaler of broadband services and not an Internet Service Provider in its own right, and it's important to realise that this is a deal that it's running between itself and its NBN Retail Service Provider (RSP – basically NBN's own term for what you'd call an ISP) partners.

However, it's a deal that should see your general Internet service quality jump up a little, and it's feasible that you may even see some slight speed boosts along the way.

What is a 40% capacity boost anyway?

When ISPs sign up to provide NBN services, they do so by purchasing what's called CVC – Connectivity Virtual Circuit – access. It's effectively the quantity of bandwidth that an ISP has to offer to all of its customers, which it can then allocate out on a needs basis.

What ISPs typically do of course is buy as little CVC as they figure they can get away with, because it's one of the more expensive parts of providing NBN access, and most of the time, most of us aren't using 100% of our capacity anyway. If the little old lady who lives down the road is on a 50/20Mbps connection but barely ticks above 20Mbps watching the UFC on the weekends, an ISP doesn't need to actually have all of that 50/20 sitting around all the time for her to use under normal circumstances. They can allocate it dynamically, save on CVC costs and, presumably, make a profit that way.

However, the coronavirus pandemic saw a whole slew of people rather more permanently stuck indoors trying to work, gain an education or just watch a whole lot of streaming TV services. NBN Co could see what this meant, and so it introduced a 40% boost to its ISP partners at no additional cost, to keep the network working as smoothly as possible.

To get back to our example, where the ISP might be paying for 100 units of capacity, it was now getting 140 units for the same price.

Does that mean everyone's speed went up by 40%?

Not exactly. That additional capacity was introduced in order to give ISPs the ability to provide service on a network that was going to hit peaks during times when usually there would be troughs of data usage.

Typically on the NBN, usage peaks in the evening, which is why ISPs typically promote their "typical evening speeds" when advertising, because that's when the network is under the heaviest load. If you think of peak hour driving, that's usually when it's hard to hit even 20kph in most cities, let alone the legal 50 or 60kph you might be able to.

That extra capacity is like adding an additional car lane, because you know that there will be a lot more traffic coming your way. Because ISPs can dynamically allocate that additional data, they could use it to load-balance more effectively, giving more of us the speeds we're paying for, but not necessarily actually faster speeds to speak of.

Which doesn't mean that you might not have seen improved performance, because ISPs had more resources to share around, but that's a side effect of providing a more reliable service, not a direct intent.

How much of a data impact did COVID-19 really have?

NBN Co's own reporting on data volume usage makes for interesting reading, because while Australia has been remarkably fortunate in terms of the health impact of coronavirus overall, we've definitely ridden a wave of data usage along the way. 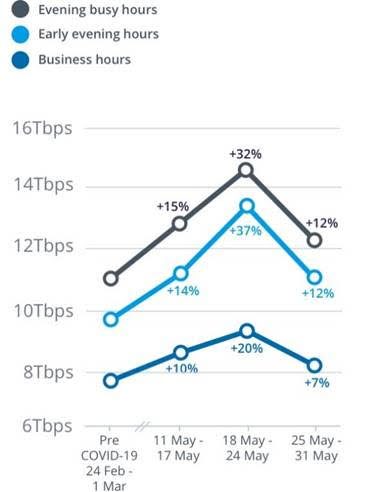 For the week of 11-17 May, according to NBN Co's own figures, downloads in business hours were up 10% on average, while early evening hours jumped 14% and peak evening busy hour usage was up 15% on pre-COVID 19 baselines.

For the following week we were all still busy slurping down the data, with a 20% jump in business hours, 37% jump in early evening hours and 32% in evening busy hour usage.

However, that also coincides with when many (but certainly not all) coronavirus restrictions were starting to drop, because the following week of 25-31 May saw business hour usage up by only 7% and both early evening and peak evening figures up by 12%.

That does point to reduced network usage, bearing in mind that most broadband usage is asynchronous – we all tend to download way more than we upload, even in the Zoom era.

It's interesting to note that there hasn't been a specific drop in upload data rates across this time period, and that's almost certainly down to the intense rise in working from home collaboration and video conferencing tools. There's a big difference between sharing a PowerPoint presentation via email and showing one off on a Microsoft Teams collaboration in data terms, and it will be interesting to see if that trend slides downwards as more Australians return to office-based work or not.

Does everyone get the 40% capacity boost on the NBN?

No, and that's long been the case. If you're on the SkyMuster Satellite parts of the NBN, you'll be used to the fact that your Internet usage is strictly on a quota basis. That's in place to ensure access for all Satellite users, the vast majority of whom are in quite remote regional areas. NBN Co's deal for those consumers is rather more direct than the 40% CVC boost, because it's providing a doubling of data quota through to at least 19 August 2020 to 90GB a month from the usual 45GB a month.

It very much depends on NBN Co, but based on its language around its announcement to keep the 40% boost going, we can reasonably assume that this is when they'll roll it back unless there's a significant change in the public health picture by then that could see it remain a necessity. Based on those early graphs showing usage slowly returning to more normal levels, that seems unlikely, but we'll have to wait and see.