Everything you need to know about Amazon Music

Music streaming services are in their prime and Amazon has its very own exhaustive library of tunes to consider.

While Amazon Australia technically arrived in the country late last year, it forgot to pack the popular Amazon Prime subscription service for the trip Down Under. Now Amazon Prime is available in Australia in all its glory and includes free two-day domestic delivery, free Standard International Delivery on eligible orders over $49, Amazon Prime Video, Prime Reading and Twitch Prime. It doesn't include the full suite of features offered in the US, but it also comes a little cheaper in Australia. One feature that's not currently included in the package is Prime Video but we do have the separate Amazon Music Unlimited in Australia, Amazon's horse in the music streaming race.

Just like Spotify, Amazon Music Unlimited offers curated playlists and the option to create personal playlists. A quick browse of the service shows that it needs some time to figure out my tastes and that Amazon Music Unlimited's curated playlists aren't as eclectic or relevant as Spotify's. Again, this could be a lack of user data at this point, so we'll check back in after a few weeks of usage.

Another flagship feature of music streaming services are stations (or Radio on Spotify); essentially playlists curated around a genre artist. For example, the Lady Gaga station will serve you up a healthy mix of Gaga's tunes and other artists with connecting themes, genres and moods.

Just like its rival services, Amazon Music Unlimited offers offline play for tracks. If you're heading on a long-haul flight or simply want to avoid excess data usage, you can download tracks and albums before leaving the safety of your unlimited data home broadband connection.

If you've grown comfortable with the luxuries of Spotify, there will be a few features you never knew you would miss when making the jump to Amazon Music Unlimited.

One such feature is Concerts, an incredibly handy Spotify feature that alerts you to upcoming gigs in your area based off your preferences.

The next is Podcasts. While Spotify's podcast selection isn't exhaustive, it is still quite new comparatively and the same feature is noticeably MIA with Amazon Music Unlimited. 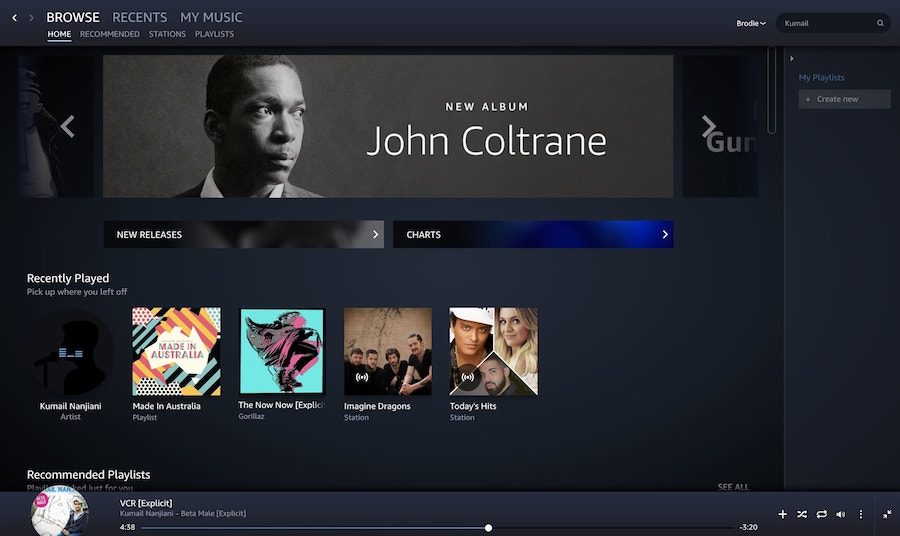 What music is available on Amazon Music Australia?

Amazon Music Unlimited boasts a music library of over 50 million tracks, a decent lead on Spotify's some 30 million at last check. However, there's not a lot of transparency around this number. Being a pure on-demand streaming service, Spotify's claims of library size are fairly straightforward. If it's got it, you can stream it. However, Amazon also acts as a digital music store and allows you to purchase tracks and albums for a one-off fee. It's not entirely clear from Amazon Music Unlimited's landing page how much of this "50 million tracks" claim is on-demand or available for purchase.

It gets even more confusing if you happen upon the US or UK pages, which tout wildly different library size claims. The US landing page is branded simply as Amazon Music and only claims a collection of 2 million tracks.

At launch, Amazon commissioned a completely original playlist for the service called "Made in Australia". The playlist features 23 cover songs from various Australian artists such as Gang of Youths, The Rubens, Kasey Chambers, Ball Park Music and Japanese Wallpaper.

What apps and devices are compatible with Amazon Music Unlimited?

Outside of that, you can download apps for PC, Mac, Android, iOS, Fire TV or simply listen in via the Amazon Music Unlimited web portal.

How much does Amazon Music Australia cost?

There are no lock-in contracts so you can cancel your Amazon Music Unlimited subscription account at any time.

Is there an Amazon Music Australia free trial?

Yes. You can try Amazon Music Unlimited free for 30 days, but you'll need to tie it to your existing Amazon AU account and payment information. The trial is automatically set to renew after those 30 days, so if you don't want to pay for an ongoing subscription, make sure to cancel before the end of the trial period.

Sick of Spotify? Get 30 days of Amazon Music Unlimited for free from Prime Video

If your music streaming provider can't keep up with your eclectic tastes, try out Amazon Prime Music for 30 days completely free.

Are the words "free" and "trial" music to your ears? Then get three months of unlimited music courtesy of Apple.

Looking to tune in to Amazon Music Unlimited but don't know where to begin? These deals will give you a chance to check out the service for next to nix.

The popular video platform has its sights set firmly on Spotify.

Here's how much your favourite music streaming service is costing you in monthly data, and how you can reduce it.

Claims that the music service doesn't have licences for 21% of its catalogue could pose a challenge.

Rumours abound that Apple is preparing to ditch paid music downloads in favour of streaming.

You've got just a couple of short weeks to shift to other music-streaming services.

A recent contract leak suggests that, in a bid to keep major publishers interested, Soundcloud is changing course and giving in to the paid subscription model.

With over 50 million songs and 27 million subscribers, Apple Music has struck a chord with music lovers around the world.