The Motorola Moto G7 is a fine budget handset, but it's very much a case of Motorola simply keeping pace with the budget market, rather than leading it.

No reviews yet. Write a review
Alex Kidman 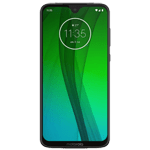 While rumours continue to swirl around Motorola re-entering the premium market with a proposed foldable successor to the Motorola RAZR line, its core market, especially in Australia, has long been its G-series phones. They're affordable, powerful within their budget range and generally good if rather safe picks for those after a new smartphone.

That's the story of the Motorola Moto G7 in a nutshell. It's an improvement over last year's Motorola Moto G6 under the hood, but it's not the most exciting budget phone we've seen.

Motorola hasn't massively tweaked the Motorola Moto G7 from last year's iteration of the same phone, and that's an approach with some definite upsides. If you like Motorola's mostly-soft-touch approach to Android, this is a good option for tweaking. Performance upgrades keep it apace and in some cases ahead of the competition.

However, the camera technology isn't the best, and neither is the underlying design, which is starting to feel a little tired. If you're after a conservative-looking phone, that might not be a big concern.

The Motorola Moto G7 provides plenty of value for those who prefer a simpler phone style.

The Motorola Moto G7 is on sale in Australia now at a recommended price of $399 through Motorola's local website, Officeworks, The Good Guys and Mobileciti.

If you're a fan of Motorola's general approach to its phones, you could consider the slightly more pricey Motorola Moto G7 Plus, although it's built on essentially the same frame as the Motorola Moto G7:

The Motorola Moto G7 Plus is the G7 with added camera quality and a faster processor.

The Motorola Moto G7 Power has an incredible 5,000mAh battery.

At the Motorola Moto G7 price point, you could also consider a number of competing Android handsets.

If you're after a clean Android experience in a well-built frame, consider the Nokia 7.1.

The Nokia 7.1 offers a superior display along with the power of Qualcomm's Snapdragon 636.

Or alternatively, you could consider the Nokia 5.1.

The Nokia 5.1 provides a stylish phone for less than you might think.

If you're after a modified Android look in a stylish body, consider the Huawei Nova 3i.

Great performance at a budget price

The Huawei Nova 3i combines Huawei's excellent Kirin processor with its camera smarts at a more affordable price point than its premium Mate series.

There is plenty of speculation around Motorola re-entering the foldable space with the Motorola Razr 3, so let's take a look at what we know.