The Mornington Pale Ale is an independent craft beer from Victoria that offers a delightful, fruity and light flavour that's well worth a taste.

In Australia, alcohol can only be purchased by adults over the age of 18. The responsibility of enforcing legal age requirements is with the vendor. Please drink responsibly and seek more information if you are concerned about your consumption. Brewed 60km southeast of Melbourne on the Mornington Peninsula, this Pale Ale is one of hundreds of independent craft beers that have begun appearing across Australia over the last decade. The Mornington Peninsula Brewery was founded in 2010. It was the brainchild of two mates who dared themselves to make their own beer while watching the 2008 AFL Grand Final.

Turns out they have a knack for it! By 2014, the two friends had to upgrade the size of their brewery, such was the demand for their core beers: a pale ale, an IPA and a brown ale. They've now branched out even further, with a range of speciality beers, a lager and more.

I only recently discovered the Mornington Pale Ale, which is brewed in the American pale ale style. Scouring the web for something new to try that came in a can ahead of a camping trip, I rolled the dice and tried my luck. I haven't sampled any of their other beers to date. 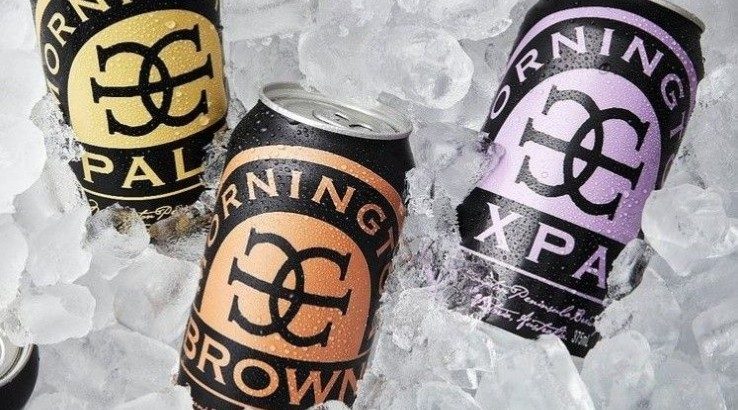 There's not too much fanfare with the presentation of the Mornington Pale Ale. The design only features the two colours, with the black background evoking James Boag's Premium at first glance. There's nothing about the logo or design that evokes thoughts of the Mornington Peninsula either – at least not to this outsider.

It's a strange look, no doubt, but I'm not convinced I don't like it. I keep wanting to look at that logo even though I find it off-putting. There is something about it I can't put my finger on.

The beer pours into the glass as a slightly pale amber colour and with plenty of gas. It's a beer that looks straight away like a great drop for a summer's day. But as I will go into shortly, it doesn't have a throwaway taste that you might associate with beers that pour light and are genuinely crisp. In fact, far from it. 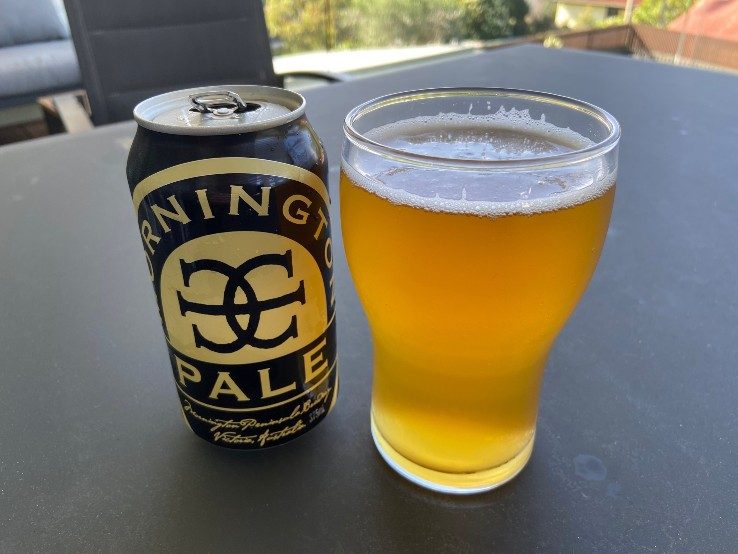 The Mornington Pale Ale is delicious. It's just a nicely made beer. You get an instant fruity flavour as soon as the beer hits your tongue and I found it quite enjoyable to just roll over around your mouth a few times. The gas tends to cream up a little as you do so, evoking even more flavour.

It's definitely got a lighter weight to it than, say, a Coopers Green, and I was initially worried that might result in a bit of dirty after taste. Sometimes with these lighter pale ales, that initial flavour and bitterness quickly dissipates, leaving you with a slightly underwhelming taste between sips. Especially at 4.7% booze.

That's simply not the case with the Mornington Pale Ale.

Instead, this beer retains its flavour through to the moment that it's all down your gullet. All while staying light enough that you can turn to it on a hot summer's day with a view to being refreshed as much as boozed. This also ensures that this is a beer you can look to drink all night, too.

The can states that the Mornington Pale Ale is brewed from "only the finest hops and malts", and I'm inclined to agree.

The Mornington Pale Ale is what I'd call a middle-range craft beer. You can expect to pay between $65 and $70 for a case, so it's a jump up from your Coopers, below your Bentspokes and around your Young Henrys.

I think that's about right. Perhaps it could stand be a tad lower, maybe on par with the 4 Pines Pale Ale or Young Henrys Newtowner. But it's still well worth exploring at its current price.

Should you buy the Mornington Pale Ale?

The Mornington Pale Ale is one of the better Australian craft beers I've tried in recent years. I thoroughly enjoyed every drop, even on a nice hot summer's day when I might tend to opt for a lager. It's a light pale ale, best served ice cold, and it's wonderfully refreshing. But it has a genuine heart to it, with endless flavour that sits on your tongue from sip through to swallow, bubbling away happily.

It's a tad on the expensive side, and I'd like to see it drop to around that $60 mark, but don't let that put you off. If you fancy an easy-to-drink, light and refreshing yet delicious pale ale, the Mornington Pale Ale is a winner.