More of Australia’s fintechs are focused on payments and wallets One-quarter of fintechs in Australia's maturing fintech sector has a new core focus.

The 2018 EY Fintech Australia Census has revealed a matured sector in Australia with the majority of fintechs in the post-revenue stage, over three years old and with an average of eight full-time employees. The Census has also revealed a shift in focus for fintechs, with payments, wallets and the supply chain taking over as the main type of fintech company we have in Australia. According to the survey, 24% of respondents listed themselves as innovating in that space. This replaced wealth and investment from the 2017 Census. In the 2017 Census, 30% of fintechs listed themselves as being involved in wealth and investment.

The EY Fintech Australia Census, which this year launched on the first day of the Intersekt festival taking place in Melbourne this week, provides a comprehensive snapshot of Australia's fintech landscape and is in its third year. It is based on 151 online surveys with fintech companies, 12 interviews and various EY fintech research reports. 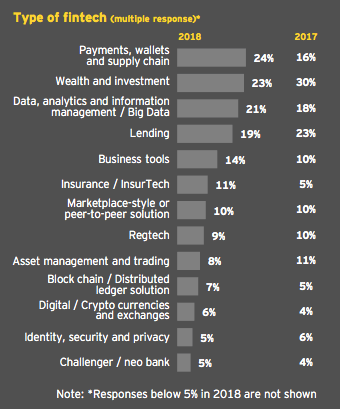 Payments have definitely been the name of the game for a number of successful fintech startups, most notably Afterpay, which also spoke at Intersekt this week. The launch of the New Payments Platform in February of this year will also make it easier for fintechs to innovate in the payments space, especially with the recently announced fintech sandbox that allows companies to test products on the platform.

The Census also showed that fintech is coming into its own, even more so than last year. In 2017, the majority of fintechs (48%) were between two and three years old. In 2018, the biggest majority (43%) of companies were over three years old.

One small drop from last year was in the proportion of companies that are post-revenue, with 68% fintechs in post-revenue in 2018 compared to 71% in 2017. However, the report notes that this is still a stable proportion considering the number of new fintechs included in the research in 2018. The continued growth of Australia's fintech ecosystem is due to a number of factors. One, as identified in the Census, is the availability of accelerators and incubators. According to the survey, 69% of fintech respondents said these were an important contribution to the industry, up from 60% in 2017. This increase may be due to the continued investment in fintech and startup hubs in key centres. This includes the Sydney Startup Hub and the funding for two separate fintech hubs in Melbourne.

Looking to the future, fintechs are optimistic. Fintechs indicated a median growth of 125% on their revenue in June 2018 compared to June 2017. The report notes this is mainly driven by 27% of fintechs, which have experienced growth in excess of 300%. Fintechs also continue to enjoy support and new opportunities from Australia's regulatory environment, including our upcoming open banking regime. The report also notes that "Notwithstanding the revelations from the Royal Commission, Australia’s sophisticated and trusted regulation of financial services provides a solid foundation from which to develop solutions."

Katryna Dow, founder and CEO of Meeco, said that when they started in 2012, there was no fintech industry to speak of.

"Fast forward to now and Australia not only feels different, but is leading the way with world-class innovation. Given the regulatory changes, there is real confidence in fintech helping to shape the future of the industry."