If you're a fresh recruit to the Monster Hunter series then now is the perfect time to jump in.

I've always been tempted by the spoils of past Monster Hunter titles. The thrill of the hunt, the creature comforts of crafting your own gear from the flayed bits of your prey. However, the dense learning curve and the perpetual loading screens often sent me packing early on. I feel like I'm alone in this. Look at the best-selling games in Japan for the past 7 years and you will see the Monster Hunter series sitting high and mighty. The series has had a decent run here in the West too but nothing close to its fervent following in Japan. Now for the first time in a long time, Capcom is taking the insanely successful series and popping it on PlayStation 4, PC and Xbox One to appeal to a broader audience. Whether you're a venerable veteran or a grassroots greenhorn, I can guarantee you're going to absolutely adore Monster Hunter World.

Monster Hunter World's new beginning marks a fresh slate in more ways than one. First, there's the literal journey to a new world. As the protagonist (who you craft with some schmick customisation options) and member of the Research Commission's Fifth Fleet, you and a ragtag team of hunters journey to "the new world" to seek out the Elder Dragons and better understand their impact on the world. Starting on a rickety ship, things get turned upside down early as your boat is tanked by one such Elder Dragon, Zorah Magdoras (essentially a living volcano the size of a small island). From there, it's up to you to help the Research Commision hunt and catch monsters old and new and set up camp across the game's sprawling maps. That's the general gist of the story, and while there's story beats involving the Commission and its mission and plenty of gorgeous cutscenes, you spend most of your time in Monster Hunter World chasing these fairly straightforward goals. There's a story being told here and a lot of chatterbox NPCs throwing page after page of dialogue at you but if you're like me you will be speed-reading, eager to get to the meat of the game - the hunt.

Being familiar with the series, I had a loose grasp on the game's core principals going in but I do feel sorry for the poor souls going in blind. While Monster Hunter World gives a lot of information upfront by necessity, it gives it in huge walls of multi-page text. These tutorials aren't always outlined as succinctly as they could be and on a smaller TV, I could see there being some serious accessibility issues with the game's menus and tutorial text.

My best advice is to dive in head first and learn the ropes on the run. It compliments the survivalist mentality and to be honest you'll pick up everything you need to know as you go. The game's first few missions will prepare you for just about every scenario anyway. 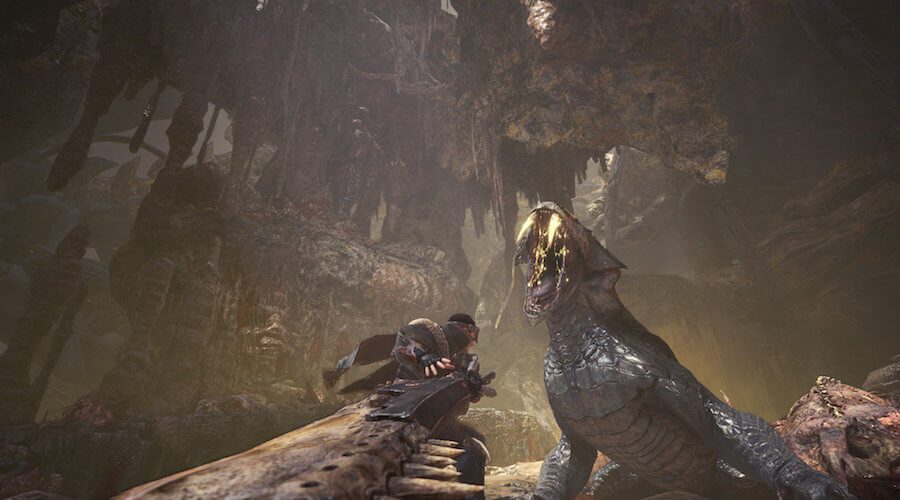 Before we get into the guts of this beast, I suppose its worth mentioning my desired loadout. I kicked things off with the Dual Blades, a fast-paced combo that allows for rapid flurries – a decent choice for any beginner if I do say so myself. But since getting to grips with the game's combat, I've favoured the Insect Glaive, a double-ended weapon that allows for aerial combat and a swift escape in a spot of bother. It also comes with a complimentary Kinect, a living projectile that damages your enemy and inflicts various debuffs. You can also switch out your Kinsect for different effects and nurture it to take on different elemental properties. I'm looking to move on to something heavier (like an axe or hybrid weapon) now I've nailed down my timing and manoeuvrability but I'll be sad to say goodbye to my trusty Glaive.

As for amour, I'm constantly taking what I can get from slaying larger monsters but it's been a tough slog. As is the tradition with the Monster Hunter series, certain beasts have a very low drop rate for desired resources. And it'll be a cold day in hell before I equip anything other than a complete set of armour so I'm constantly forced to fight the same monster's again and again before upgrading. This isn't a bad thing. I love the repeated stab at enemies, getting to know their movements blindfolded and their hitboxes like the back of my hand. Because, really, if you don't live for the hunt then Monster Hunter may not be for you.

Gathering resources to create pitfalls, shock traps, poison and smoke bombs is all part of the grind because going toe to talon with Monster Hunter World's larger monsters and Elder Dragons fully prepared and executing the hunt with finesse is one of the most fulfilling experiences I've ever had in a video game. One early battle with a large monster, the notorious and iconic Anjanath, comes to mind. After repeated attempts at taking down the winged T-Rex lookalike with all but the blades on my back, I was forced to recoup and rethink my strategy. This is when I really came to grips with the game's crafting system. 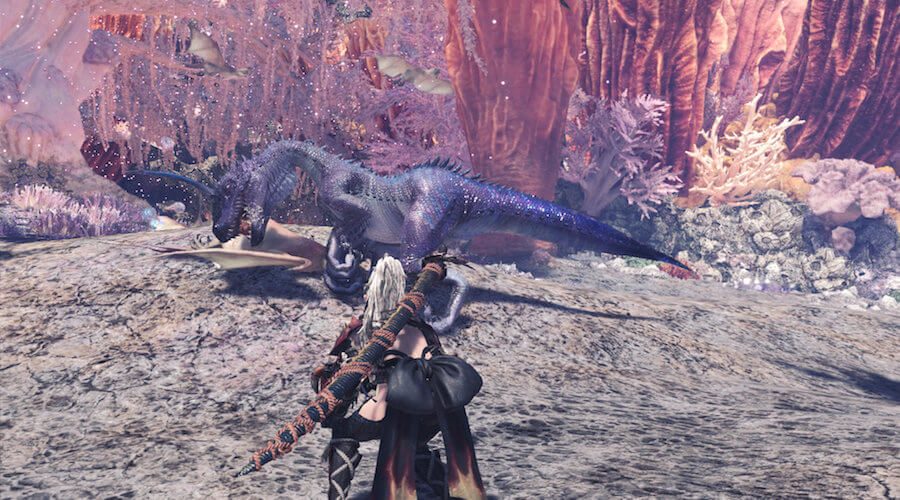 I took my time to gather anything and everything that might help bring down the brutish beast. I took on the swamp-bound Jyaratodas a few more times to craft its armour set and played the field a little to give my Glaive the boost it needed to clip the Anjanath's imposing wings. When all this was said and done, an hour or two of preparation, I took on the terrifying lizard one last time and wiped the floor with that big scaly bastard in one of the most climactic battles I've ever had, punctuated by an opportunistic and breathtaking environment kill. Monster Hunter: World introduces a side-arm, the Slinger. A wrist-worn crossbow that fires stones, berries and knives with varying effects on the enemies. One use case for the helpful secondary weapon is firing projectiles at interactable environmental objects, like a pile of boulders strung up by an overhanging canopy. Which is exactly what cropped up in the final moments of my battle with Anjanath.

With 2 minutes remaining on the mission, 2 Redpits (Slinger ammo), and 1 potion to my name, I managed to lure Anjanath under the canopy and let loose on the boulders overhead, finishing off my prey with one swift shot. It was a tremendous moment for myself and those watching. We cheered. There were high-fives all around. I'd love to see a more rewarding video game moment in 2018, but so far we're off to cracking start.

I've still got a ways to go with and a hefty multiplayer component to invest in, so take this as my provisional review for Monster Hunter World. The final score might be higher if the multiplayer significantly enhances the experience or lower if there any significant late-game gripes but for now I'm absolutely smitten with World and I think you will be too.

We reviewed Monster Hunter World on PlayStation 4 with a copy provided by the publisher.

Monster Hunter enters a new world and generation with crisp visuals, a jaunty soundtrack and more quirky palico-related humour than ever. Monster Hunter: World is more accessible than the series has ever been and it doesn't lost any of its edge in the process. We're still making our way through it, but this game is a whole new beast that's about to make waves. Hold on tight.