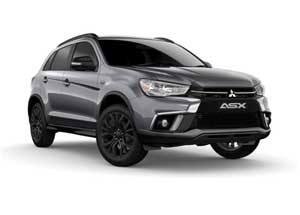 Avg. critics score: 71.00%
4 critics
How did we calculate this? We analysed and aggregated the scores of CarAdvice, CarsGuide, Motoring and Whichcar to bring you the finder.com.au score. This is a comprehensive score that brings together the four different expert ratings you see below.
finder.com.au is personal finance comparison site that provides you with the tools you need to make better decisions. Learn
how we work and how we make money.

How does the Mitsubishi ASX compare with its peers?

Mitsubishi sells the ASX from $23,990. For that amount, you'll get a 2.0-litre petrol ES model with a 5-speed manual gearbox. ES trim has large 18-inch alloys by default, as well as smartphone connectivity, a 7-inch infotainment screen, a reversing camera and cruise control. This is the only manual gearbox set-up sold by Mitsubishi.The first of the automatic models, the ES auto retails for $25,490 driveaway. For the extra outlay, you'll enjoy the benefits of the six-speed CVT transmission. These include a 0.1L/100km improvement in advertised combined fuel usage, slightly lower CO2 emissions and the same interior fit-out and equipment as the manual cog-shifting counterpart. The auto model is a little heavier, 30kgs in fact. Consequently, the payload you can carry drops from 635kg to 605kg.

Shelling out an extra $1,500 will secure you a Mitsubishi ASX Black Edition. As the name suggests, the ASX now wears stylish black finishes around the exterior, including its alloy wheels and lower front valance. Rear parking sensors are now a standard inclusion and buyers also get a smart key and a push button to start the engine. Passengers riding in the back can now enjoy rear A/C vents, but the system remains a single-zone climate control arrangement. Privacy glass shades the rear passenger compartment, while fog lights are added onto the build sheet. Occupants also sit on part-synthetic-leather chairs.

The LS model wears two-tone 18-inch alloy wheels. They lose a lot of the automated driving assists of the ES ADAS. BSW, LCA, RCTA are gone. FCM and LDW remain and Mitsubishi adds automatic high beam lamps. The smart key and touch button start system come back, as does the privacy glass from the Black Edition. Once again, seats are partly-synthetic-leather-trimmed. This model costs $28,990.

Finally, the top-of-the-range ASX Exceed sells for $32,990. This full model restores all the driver assists from the ES ADAS, adds two additional speakers to the in-car audio and sheds some light on the interior with a panoramic roof. Exceed trim seats have leather upholstery and have built-in heating for the driver and front passenger. The driver's seat is power adjustable.

Mitsubishi offers a lengthy seven-year (or 150,000km warranty), plus two years free servicing and also $1,000 of free accessories on the ASX. Metallic paints are an optional extra at a cost of $590.

Prices shown are for NSW, postcode 2000.

The above prices are the manufacturer's recommended drive-away prices (MRDP). These figures include 12 months of rego and compulsory third party (CTP) insurance. They also include dealer delivery rates and government duties.

The ASX is a popular bestseller, and for good reason. It's affordably priced and the reviews of this medium-sized SUV suggest that it's one to consider. If you want extra goodies or something that looks a little more expensive, you might be better off investigating other brands. The ASX is a no-nonsense model. Who cares if it debuted when Kevin Rudd was PM, the first time around?

The 2.0-litre petrol engine is the only engine available. As of mid-2018, there is no longer a diesel ASX model or one with all-wheel drive.

Across the range, from the entry model ES to the higher-end Exceed, the naturally aspirated engine puts out 110kW at 6,000rpm and creates 197Nm at 4,200rpm. This engine isn't hugely athletic. With peak power and torque kicking in at such high revs, you will need to work the accelerator pedal hard if you want to overtake or tow a trailer. Mitsubishi positions the ASX as an SUV for the city, where fuel economy takes higher priority than raw power or acceleration.

When it comes to gearboxes, there's a little more choice. You can opt for a five-speed manual cog-swapper (only on base ES models) or an automatic CVT on every other model.

Strangely, Mitsubishi only lists the combined fuel numbers for the ASX. We couldn't locate any official urban and extra-urban figures. Due to differing conditions in real-world driving versus regulated fuel testing, these figures should only be referenced as a way of comparing different models.

The official Mitsubishi fuel consumption figures for the ASX are as follows:

While taking media cars on various tests, journalists logged their fuel economy results. Around town, you can expect to realistically achieve nearer to 9.5L and 10.5L/100km in traffic. Another outlet recorded 11.5L/100km from a mix of city/motorway driving.

The motoring media give all cars a thorough shake-down to expose any possible handling flaws and traits. How does the ASX ride? According to critics, the suspension does a decent job of ironing out bumps and undulations. That is until you slow down to urban driving speeds where imperfections become more noticeable. For a city car, some commented that the steering could be lighter to make parking less of a workout.

One outlet probably summed up this SUV the best when they said it was more like an appliance on wheels. It's not designed to be a sports coupe, it's a way of getting from one place to another comfortably, for a modest outlay.

The interior of the ASX has made a good impression. Motoring pundits said the controls were ergonomically laid out, requiring little thought to operate and learn on the move. Internally, there's sufficient room for even taller passengers, though one outlet suggested six-footers and above should test drive the car first before making any firm decisions.

Equipment wise, the ASX doesn't have every modern piece of equipment and technology. But it's certainly very useable. For example, while there's no Mitsubishi own-brand sat nav available, you can connect your iOS or Android device to all models. This way, you can simply use your own preferred third-party navigation app. Generally, these apps have a more intuitive ,interface than built-in sat navs and include live traffic information for no extra charge. Apple CarPlay and Android Auto is standard across the entire ASX line-up.

The infotainment system also has a 7-inch touchscreen, DAB radio and USB-inputs. On the top-of-the-range Exceed, Mitsubishi swaps out the standard four-speaker system for a six-speaker set-up.

All models have cruise control, operated from the steering wheel. The seats are described as comfortable for short journeys around town, but on longer twisting roads, reviewers wanted additional side-to-side bolstering.

As many ASX SUVs will end up as family runabouts, how much storage is there internally? Motoring journalists found there was plenty of oddment storage, a particularly large glovebox and a pretty acceptable amount of interior space for passengers and their belongings.

There's no getting around the ASX's age. It's an old car that Mitsubishi has updated and tweaked. However, it still holds its own against younger rivals and sells for a very keen price. Definitely test drive this one at the very least.

Compare some options to finance a Mitsubishi ASX