MicroStrategy buys 0.1% of all Bitcoin for treasury

How many more times can someone buy that much of the total supply?

On 11 August MicroStrategy, the largest independent publicly-traded business intelligence company, purchased over 21,000 Bitcoin for its reserves – a full 0.1% of the maximum supply – adopting it as a primary treasury reserve asset. Its share price rose about 10% as a result, which is probably encouraging for other businesses that may be pondering the same decision. 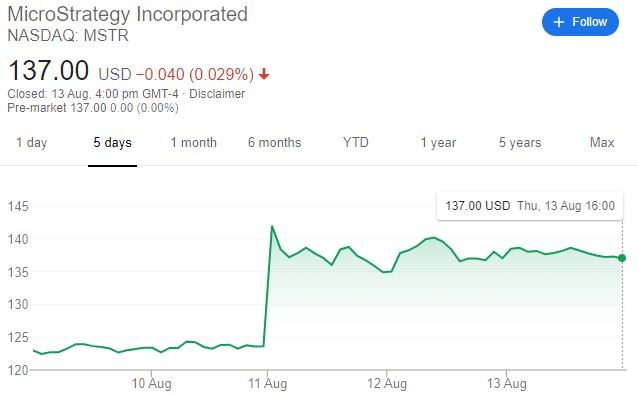 It's also very much a sign of the times.

"Our investment in Bitcoin is part of our new capital allocation strategy, which seeks to maximise long-term value for our shareholders," said MicroStrategy CEO Michael Saylor. "This investment reflects our belief that Bitcoin, as the world’s most widely-adopted cryptocurrency, is a dependable store of value and an attractive investment asset with more long-term appreciation potential than holding cash."

"Since its inception over a decade ago, Bitcoin has emerged as a significant addition to the global financial system, with characteristics that are useful to both individuals and institutions. MicroStrategy has recognized Bitcoin as a legitimate investment asset that can be superior to cash and accordingly has made Bitcoin the principal holding in its treasury reserve strategy," he said.

It was a conscious decision to proactively address the uncertainties ahead, Saylor said, specifically the lack of any more attractive place to put money safely.

"Our decision to invest in Bitcoin at this time was driven in part by a confluence of macro factors affecting the economic and business landscape that we believe is creating long-term risks for our corporate treasury program ― risks that should be addressed proactively. Those macro factors include, among other things, the economic and public health crisis precipitated by COVID-19, unprecedented government financial stimulus measures including quantitative easing adopted around the world, and global political and economic uncertainty. We believe that, together, these and other factors may well have a significant depreciating effect on the long-term real value of fiat currencies and many other conventional asset types, including many of the assets traditionally held as part of corporate treasury operations," Saylor said.

The move came a few days before Galaxy Digital revealed a full page FT ad for Bitcoin, framing its benefits as a hedge in a similar way.

Big ad for bitcoin in the FT today from Galaxy Digital. Love it pic.twitter.com/ro05QdvDFf

At present, it seems like a good bet though, with Bitcoin prices striking a reassuring pose in the $11,000 range since the start of August.

Of course, if MicroStrategy bought its Bitcoin just a few months earlier it could have walked away with 0.2% of the total supply for the same price. And if prices continue to rise, there may not be too many opportunities for other businesses to fill their treasuries with the same value for money.