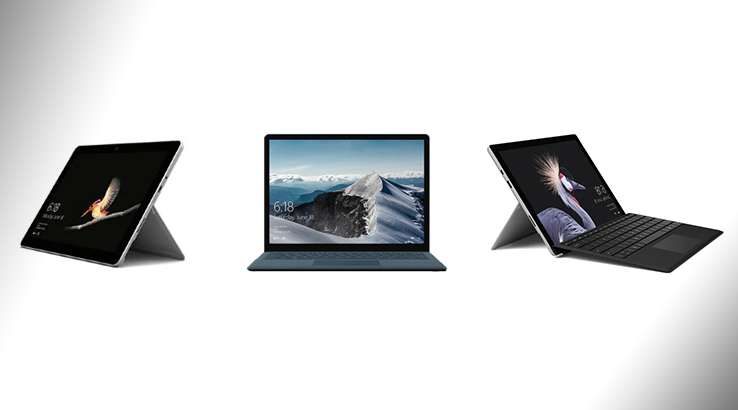 How does Microsoft's new and highly portable Surface Go stack up against its bigger siblings?

With orders now open for Microsoft's new budget-pleaser laptop, the Surface Go, how does it compare to its more expensive counterparts?

Surface Go vs Pro vs Laptop: Specifications and Features

While the Surface devices, especially those with kickstands, share a similar design across the board, you can see the detail in the numbers. The Surface Go's performance pales in comparison to Microsoft's high-end players, but it's also about half the price of its closest relative, the Surface Pro.

The Surface Go is available with either 4GB or 8GB of RAM and either 64GB of eMMC storage or a 128GB SSD. The processor, the Pentium Gold 4415Y, carries 2 cores (the typical configuration of cores on many laptop-grade CPUs) along with Hyper-Threading for added performance on the 1.6GHz chip.

Both the Pro and Laptop boast significantly more power than the Go. Each can be equipped with 4, 8 or 16 gigabytes of RAM and both use Intel Core m3, i5 or i7 processors.

Windows 10 S comes pre-installed on both the Surface Go and Surface Laptop, but what does that mean for the average user? Windows 10 S provides users with a more bare-bones Windows experience, restricting access to non-Windows Store apps, as well as providing a faster and more secure device.

Luckily, if you're the kind of person who enjoys a laptop with liberty, both the Pro and Laptop allow simple and easy switching from S mode to fully-fledged Windows, although you'll only be getting Windows 10 Home on the Go.

The Surface Pro comes straight out of the box with Windows 10 Pro, giving users access to benefits like BitLocker.

While retaining the high-quality touch screen, premium materials and other traditional Surface features, the Surface Go won't break the bank like its siblings.

The price range massively increases for the Pro and Laptop, with Laptop pricing starting at $1,099 but extending all the way up to $3,999 on the highest-spec model.

The Pro starts at $1,199 and, similarly to the Laptop, the most premium model will set you back a full $3,999. And that's before you buy either a pen or a kickstand.

Surface Go vs Pro vs Laptop: What's best for me?

The Surface Pro and Go are both 2-in-1 touchscreen tablets with detachable keyboard mounts, making them more versatile than the bigger Surface Laptop. However, some people prefer having a physical, rigid and included keyboard, and for those people the Surface Laptop could be an appealing option.

Which of the three devices is best for you is entirely dependent on your use case.

If you're creative and dabble in a bit of photo or video editing, spending more on a Pro or a Laptop will allow for a more streamlined experience with less hiccups. If you just want a simple and easy-to-use device for tasks like word processing, presentation creation and movie-watching, the Surface Go might be perfect for you.