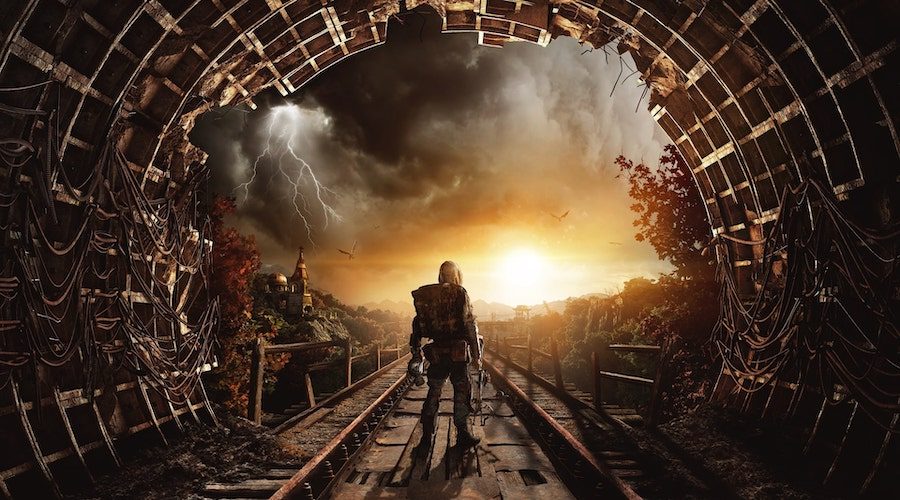 The Metro games have always offered memorable train trips, despite never being completely smooth rides. When you hop aboard you'll just have to accept that some of your fellow passengers are going to exhibit annoying behaviours. Also, every carriage you move through bears a little rust here and there.

All that being said, there's still nothing in the first-person shooter genre quite like Metro Exodus. One minute you'll be enjoying warm-fuzzy camaraderie as you chug booze and cross lush open horizons, then the next moment the track switches to cast you into a subway of post-apocalyptic monsters and pant-soiling claustrophobia. Basically, this is the bipolar express. But it's also well worth a ticket.

You won't feel too out of step if you're just beginning with this end-of-the-world saga. You're Artyom, a ranger who has lived the first 20 years of his life underground in the mutant-infested subway under irradiated, post-nuke Moscow. This place is a nest of crazy. Around every corner is banditry, lethal supernatural phenomena, nazis, commies and probably commie-nazis. Though Artyom is chided by his fellow survivors, he doggedly searches for distant radio signals and dreams of finding life away from here. Can't imagine why.

Fate intervenes when our Russian hero and his friends (a ragtag spec-ops group called the Spartans) accidentally stumble into a train heist. From here we go on a road trip across a Eurasia that has had a thorough George Miller makeover. Yep, that's the big switch up here, returning fans: the blinkers have come off and the Metro series has gone open-world. 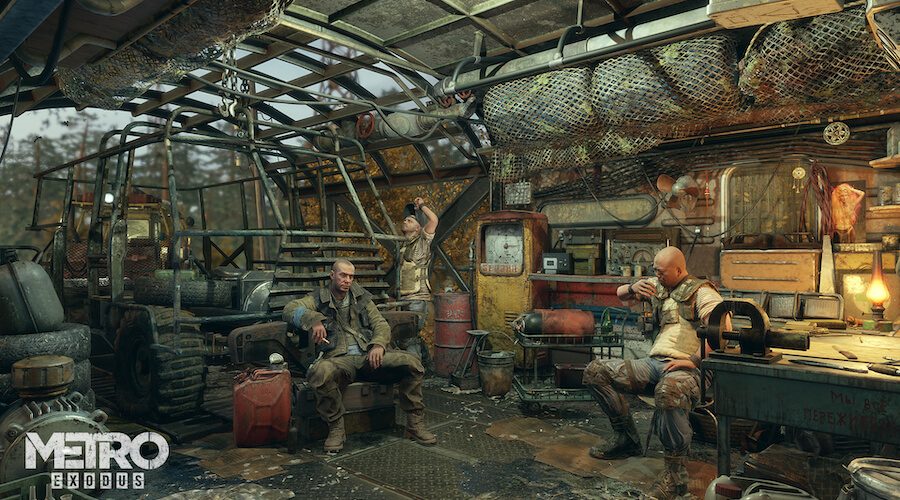 While there's a smattering of urban environments still present, the bulk of your time is now spent picking through (in rough level order) arctic tundra, deserts and verdant forests. These sandboxes offer a considerable amount of side content and a lot of leeway in terms of order of exploration. They're also decently sized, to the point where you're provided (fairly utilitarian) vehicles to get around in. That's more or less a canoe and a beaten-up kombi. So yeah, maybe forget any expectations of a V8 Interceptor crossbred with a monster truck.

Legging it across the worlds comes with the usual and oddly pleasing micromanagement that's part and parcel with a Metro game. When night comes, you'll need to flick on your shoulder lamp or pull on some night-vision goggles, and those batteries will need to be intermittently renewed via a hand charger. There's the option to whip out your lighter, too, but it's best used for immolating mutant spiderwebs than it is pushing back the darkness.

Likewise, if your Geiger counter goes nuts or a sandstorm rolls in, you'll have to yank down your trusty gas mask. Pleasingly, it comes with a range of mini-systems to maintain, including L1 taps to wipe condensation off the visor, plus its filter will need to be swapped when Artyom's wristwatch starts bleating. Lastly, you need to be mindful about not wearing it in a scrap. Damage reduces its efficiency and can even require duct tape hole patching that will obscure your vision. 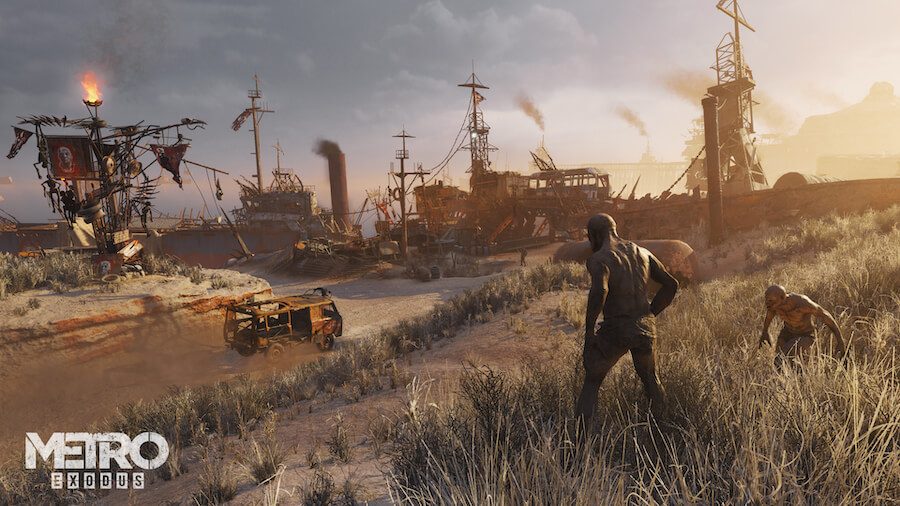 From the outside looking in, this may sound like a colossal pain in the arse but you'd be surprised by how much it grounds you in the world and keeps you on the edge of your seat. This is especially true when you enter the many dungeon-like areas that harken back to what has always been an urban-exploring game franchise. Down in the places where only Balrogs need not fear, you're always living on borrowed time. Ammo is scarce and light sources are always fleeting and imperfect at the best of times. The atmosphere is so thick you can almost smell the expended shotgun shells and taste the grit in the air. Metro Exodus offers the best survival-horror shenanigans out there.

Top-notch visuals and the attention to detail also work wonders with the immersion factor. The bones of civilisation have never looked prettier, nor felt so eerily lived in. Taking the time to smell the poisonous, glowing roses will reward you with mini-environmental storytelling along with the usual library of personal notes and last will and testaments committed to audio tapes. Out in the sandbox, Metro Exodus is at times breathtakingly beautiful – it's a truly remarkable feat for a developer that's only really known for delivering dank, dark interiors.

Speaking of snooping around, you're well advised to do it whenever possible. I found incredibly useful equipment tucked into seemingly innocuous-looking shanties, not to mention a load of crafting materials and yet more enemies to steal gun parts from. That's right tinkerers, Metro Exodus features both an in-the-field backpack crafting system along with a more feature-rich workbench at your mobile home base (a military train christened "Aurora").

I'm not much of a gun nut, but I quickly became obsessed with looting my foes to see if their gats had attachments or parts I didn't yet own (a pilfering process made easy by intelligently designed UI elements). I soon became lost in a gameplay loop of building hodgepodge guns of absurd lethality, heading out to kill people with them and then stealing yet more bits and bobs to make even gnarlier firearms.

In the end, I covered mid-range encounters with a silenced Kalashnikov with dot sight while close stuff was handled by a four-barrelled (!!!) shotgun. Rounding out this trifecta, my infiltration work was handled by either an NV-scoped railgun that fired ball bearings or an automatic crossbow with a 6x scope. I enjoyed the latter so much I took to calling her "Gladys". Don't judge our forbidden love. 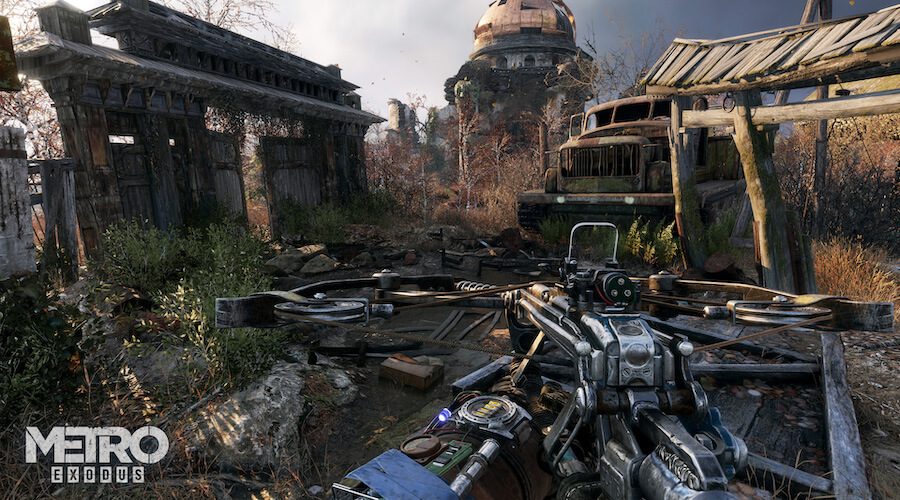 Trust me, failing to treat your weapons nicely will trip you up when the chips are down. Guns will jam as human-sized mole-men jack-in-the-box from the shadows. Giant shrimp horrors will shrug off your ball bearings and beeline to your jugular if you haven't pumped that pneumatic sniper rifle back up to full pressure. These moments, combined with the larger play-space and increased tactical latitude, make the gunplay in Metro Exodus feel like a stiffer-handling Far Cry 2 (arguably the best game in that series).

All that being said, Metro Exodus is held back from greatness by a few irritating peccadilloes. The AI, while not being completely stupid, is still a touch on the daft side. I also encountered a handful of visual bugs that jolted me out of the experience (think: floating objects, an enemy or two frozen in a stance and the old corpse jiggle dance).

They were few and far between, though. Metro Exodus' biggest problem is near constant. There's just no nice way to say it: the voiceover and dialogue in this game is subpar. Had that not been the case, I feel that the moments of mid-mission camaraderie with my wife, father-in-law and cohorts would have been elevated to something truly moving. What passes for acting here detracts from what is otherwise a great road-trip yarn.

Negatives aside, there are no massive downsides that can derail what is still a sleeper hit of a shooter. After being thoroughly let down by the dystopian sandbox of Fallout 76, it's an absolute pleasure to be thrown headfirst into the often disgustingly gorgeous murk and mire of Metro Exodus. Buy it, turn out the lights, select Ranger Hardcore difficulty and have the (shortest) time of your life, comrade.

Metro Exodus was reviewed on PlayStation 4 with a copy provided by the publisher.

Though it's a little rough around the edges in terms of voiceover and script, Metro Exodus rises from its usual genre niche (a hole in the ground) to stand tall with the other AAA surface-dwellers.