Mobi is an upcoming carpooling rideshare app that will be first launching in Melbourne in the near future. It's already completed live testing with a small pool of 200 participants and is now eyeing its full release.

It's very different to the other rideshare apps out there.

It's not a taxi app, but instead facilitates carpooling among commuters within the same organisation. It's designed for students (or staff) of the same university or workers at the same company to commute together. It's only usable by people within the same organisation to help keep it safer. For the riders, it costs a flat $3.50 per trip, which is paid to the driver minus whatever cut Mobi takes for itself.

It's one of those systems that presents a win-win proposition. Riders get quick and easy carpooling at the cost of public transport, while drivers can offset the cost of their own commute.

Where the NEM blockchain comes in

The NEM blockchain will initially be entering the picture as Mobi's escrow system through the NEM Catapult aggregate transaction system. In simple terms, this is a smart contract that executes a transaction among multiple parties once it's approved by specified participants.

In this case, it's likely that users won't even know they're using the NEM blockchain. Here's roughly how it might work, per the NEM Catapult website. 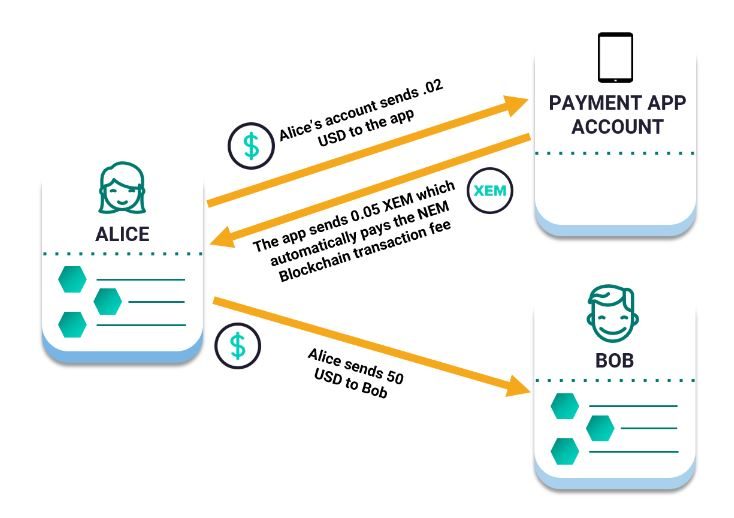 So, in this case, Bob might be the driver, Alice the rider and Mobi the payment app account. The smart contract is set up to make Alice's payment of $3.50 on completion of the ride. It might execute when both Alice and Bob tick the "ride completed" button on their app. For the end user, the payment can happen immediately at the completion of the ride while Mobi secretly covers the cost of the blockchain transaction on the back-end with its own XEM reserves.

"In Melbourne, the first city on our roadmap, there are approximately 2.1 million commuters and 1.3 million car drivers," explained Mobi co-founder Daniel Logan. "Mobi bridges this gap by creating a convenient and affordable way to make commuting a more positive experience for all. The app creates a sustainable solution, which can help limit carbon emissions, travel congestion, and free up much-needed parking spaces across densely populated cities. NEM allows this to happen more transparently, efficiently and cost effectively and we are happy to partner with the community strategically.

"NEM is built around a powerful system which provides us with direct API access to a specialised set of tested and secure on-blockchain features."

NEM Catapult's aggregate transaction system, which offers escrow and helps facilitate cheaper transactions, is one of those features. It also helps Mobi build more going forwards and over time, it's expected that NEM will be used to record multi-party payments, loyalty points and storage of data on carbon emissions and sustainability measures.

In a nutshell, the benefit of blockchain here is that the network itself can perform the functions that would previously have required trusted, and expensive, third parties.