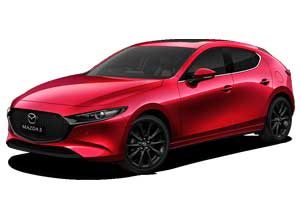 Avg. critics score: 83.00%
5 critics
How did we calculate this? We analysed and aggregated the scores of Car Advice, Motoring, WhichCar, Drive and Finder to bring you the finder.com.au score. This is a comprehensive score that brings together the four different expert ratings you see below.
finder.com.au is personal finance comparison site that provides you with the tools you need to make better decisions. Learn
how we work and how we make money.

How does the Mazda3 compare with its peers?

A comprehensive review of the Mazda3 hatch

The Mazda3 is available in six different grades as well as two body styles: a hatchback or a sedan.

All in all, it’s a very impressive spec list, especially when considering this is the entry-level Mazda3. Drive-away prices start at $28,629.

Spending an extra $1,751 will net you a G20 Evolve Mazda3, which starts at $30,380. Notable upgrades include 18-inch alloy wheels, dual-zone climate control with rear vents, a leather steering wheel and gear shifter and push-button ignition. Automatic-equipped models have paddle shifters.

Why would you plump for the $33,259 G20 Touring model? You get leather seats for a start as well as a power-adjustable driver’s seat and advanced keyless entry. Mazda also attaches an automatically dimming driver side wing mirror to prevent drivers behind you dazzling you with their lights.

Spending $33,774 puts you in G25 Evolve territory. This model has a large capacity 2.5-litre power plant. The engine can stall cylinders to improve efficiency. This model has cloth upholstered seats and automatic models have a drive selector and a kick-down switch that unlocks full acceleration.

The semi-hot Mazda3 G25 GT costs $37,284. Model highlights include an auto-folding exterior mirror with heating elements, a 12-speaker Bose premium sound system with an amplifier plus heated seats and a heated steering wheel.

Buyers who splurge $41,499 get a fully-comped G25 Astina Mazda3. This hatch has attractive black alloy wheels, adaptive LED headlights, a power-sliding and tilting sunroof plus the normally $1,500 Vision Technology as standard.

The Vision Technology system is made up of a 360° around-view monitor, cruising and traffic support, driver monitoring, front cross traffic alert and front parking sensors. The daytime running lights are also upgraded from halogen to more energy-efficient LED units.

Click on the price to compare Mazda3 car loans.

Standard, no cost, paint finishes include the following:

Premium paint finishes cost $495 and come in the following colours:

The above prices are the recommended delivered price (RDP) for a private buyer living in Sydney postcode 2000. They include 12-months rego, a year's compulsory third party insurance, stamp duty, statutory charges, dealer delivery and admin fees.

The Mazda3 is a crisply styled, fully stocked hatch or sedan with an exhaustive arsenal of safety gadgets. The rear seats are snug and boot space was commonly criticized, but overall, this is a very well built and recommended small car that'll appeal to many drivers.

The Mazda3 sells with either a 2.0-litre or 2.5-litre petrol engine.

Higher-end Mazda3 grades use the more powerful 2.5-litre petrol engine. For the Aussie market, this engine develops a standard 139kW @ 6,000rpm and 252Nm at the same 4,000rpm as the smaller 2.0-litre. Like the 2.0-litre, it's a naturally aspirated power plant.

For the Mazda3, the carmaker gives buyers the choice of a Skyactiv-MT manual or a Skyactiv-Drive automatic transmission. Both of these gearboxes have six-speeds.

Car reviewers' impressions of the Mazda3 engine and transmission combo

Some reviewers observed that with no forced-induction ramping up the lower-end torque and power outputs, you really have to spool the engines to get up to speed. Another tester commented that it felt like it was a tad underpowered. The smaller 2.0-litre doesn't inspire confidence when you need some get-up and go, like overtaking or for tackling hills. Others said it was a bit of a noisy power plant. One journo went as far as to say the chosen engine was the Achilles' heel of the Mazda3.

Other evaluators suggested that for town driving, the engine is more than capable and it'll easily handle relaxed highway cruising.

Mazda supplies fuel economy figures for both engine variants in the vehicle's brochure.

2.0-litre I4 Petrol
The smaller of the two petrol power plants uses the following claimed figures when paired with a manual gearbox:

With an automatic transmission, the 2.0-litre uses less fuel:

The larger engine surprisingly appears to be quite a frugal fuel-drinker. With a manual, it claims the following:

When the larger engine is paired with an automatic, the 2.5-litre motor claims to use the following:

A word on factory fuel figures
In order to determine the fuel usage data of an engine, carmakers have to put their vehicles through a heavily-controlled testing procedure. This evaluation is designed specifically to reduce any variations that may affect the results. However, on public roads, there are a number of factors that impact on fuel economy. Consequently, there can be a margin of difference between the brochure figures and real-world achievable numbers. Only use the brochure data as a way to compare different models.

Sometimes, factory fuel use claims can be a little fanciful. For the Mazda3 though, many of the reviewers found them accurate.

A model hatchback should have agile, athletic handling, and the Mazda3 fulfils these expectations. Apparently, spinning the wheel requires little effort and the steering rack transmits feedback to the driver effectively. Reviewers perceived Mazda engineers have done a good job of keeping the ride and handling nice and tidy. One tester said it offered the perfect blend of low-speed manoeuvrability and high-velocity corner-holding abilities. To sum up, it appears to be a good example of a front-wheel-drive hatch. It has a sharp, tight feel with little body roll. Crucially, the new model improves upon the previous generation too, which shows Mazda's commitment to progressing their product.

The ride hasn't compromised passenger comfort either as testers said the hatch did a good job of smoothing over road imperfections.

However, the most common bugbear with the interior was a lack of space. It was felt the car was too tight in the rear and the stingy boot space was picked up on universally. Also, it seems the large scooping C-pillar caused some interference with the driver's view.

Where the car really excels though is in the spec list. Even the basic G20 Pure models have pretty much everything you'd expect on a more premium vehicle. Also, the safety spec sheet is very long with tons of advanced safety systems. The only thing to beware of is that some journalists found the car's driver assists leaned towards being a tad too sensitive.

Ergonomics wise, motoring experts thought the Mazda3 should be held as a pinnacle to aim for. It was obvious to testers that the sculpting of seats and the positioning of controls had been minutely scrutinised and finessed. One other thing to note, while many manufacturers are switching to touchscreens, Mazda is sticking to a more analogue interface built around dials and buttons.

The G20 Evolve does away with the 16-inch alloys in favour of 18-inch rims in metallic grey. It also receives dual-zone climate control and rear air vents as well as leather wrapping on the gear-shift knob and steering wheel. Automatics have paddle shifters.

This model has a larger, more powerful engine for a start. It also gets cylinder deactivation technology for better fuel economy.

Heated seats up front, heated mirrors, a premium Bose 12-speaker sound system and a heated steering wheel set the GT apart from the rest of the line-up.

No car is perfect, but the imperfections can be minimised. The Mazda3 appears to attract a few key complaints, mainly that the rear seats and boot aren't big enough. Also, the C-pillar is too chunky, prompting most reviewers to long for better rearward visibility. Also, the 2.0-litre Mazda engine was determined to be a little sluggish. But other than those foibles, the Mazda3 was very well-reviewed. It's got an impressive feature list, cutting-edge styling and superb safety features. If you're in the market for a high-end hatch, make sure to shortlist the Mazda3.

Compare some options to finance a Mazda3