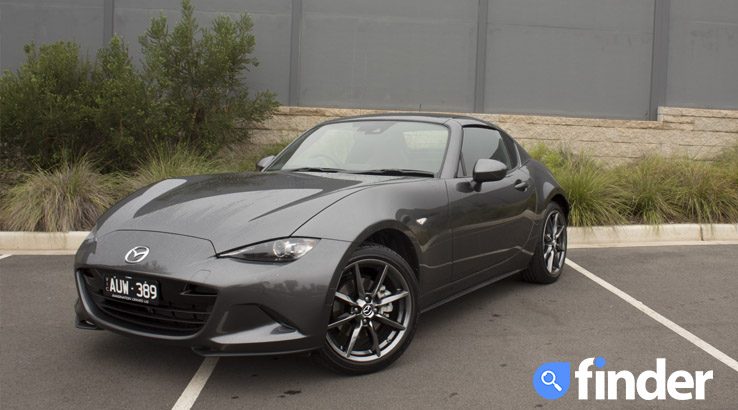 A sports car for grown-ups – but not too grown up.

My favourite game as a kid was Gran Turismo 3: A-Spec on PlayStation 2. It was a fantastic game and I believe a lot different to the Gran Turismo games produced today. Not only were the graphics great (for the time) and the racing realistic, but you could buy virtually any vehicle and modify absolutely everything about it. Turbocharger? Check. Need different gear ratios? Done. More camber? Easy.

When you start the game, you can only choose between a few cars. Every single time I would pick the Mazda MX-5 (or the Miata as it is called in the US). By the time you have enough money to purchase your next car, the MX-5 inevitably had way too much power for its light frame. It would leave everyone in the dust until you smashed into the barrier at corner one – it was great fun.

In "machine grey metallic", the RF GT looked the part with the front being particularly aggressive. It's much more intimidating than the MX-5 that started production in the 80s and continued on through the 90s, with the lights that popped up and down. And I'd definitely be purchasing those 17-inch alloys in-game.

Mazda have stepped their game up on the interior, too. The cabin features leather as well as well-thought-out finishes and dials throughout. We just drove the Toyota 86 GTS and the interior of the MX-5 feels more grown up as opposed to its counterpart, which has much more of a young, street racer feel. You get heated leather seats, leather-accented doors and the leather-look dash, which is actually hard plastic, has been executed well. 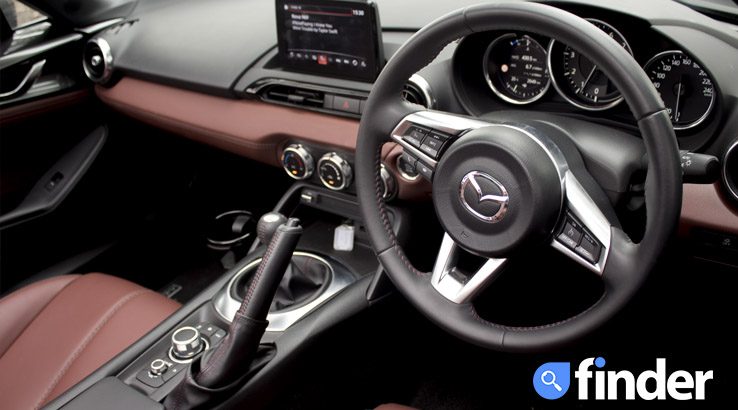 Moveable cup holders will keep your cups at bay although we noticed that they struggled with basic 600ml water bottles. These can be positioned either down near the passenger's legs or in the centre console just behind where you would rest your arm. There is also a storage bin between the passenger and driver seats that has a decent amount of space; however, it will be awkward to get to as a driver. The MX-5 doesn't have a traditional glove box meaning cabin storage is at a minimum, as you would probably have already expected from a vehicle of this size.

Two USB ports come as standard to keep your devices charged. And while there is no Apple CarPlay or Android Auto functionality as standard, there is nothing inherently wrong with the infotainment system in place. It is quite easy to use and connect up with your phone. You get satellite navigation and a voice assistant, which worked decently enough without being spectacular. There will be times you end up just using the touchscreen or console control to make things easier. There is also a console volume control too which is a great inclusion for passengers.

There is no dual climate-control in the little MX-5, but the air conditioning does a great job of getting to temperature quickly. There are also the gimbal style air vents that we appreciated on the Kia Stinger GT.

The leather seats leave a little to be desired as they seemed to be lacking some lumbar support. It isn't really going to be an issue if you are doing some spirited driving, but if you are using the MX-5 as a daily driver, you may find the seats a bit uncomfortable. It could just be a height thing, as at just over six feet tall, my head was touching the roof. It is a shame that we had so much rain during our time with the car since having the top down would have remedied that to some degree.

You get all the usual suspects when it comes to steering wheel controls. Volume and track selection for audio, cruise control as well as the voice assistant and trip computer. They're all well positioned and easy to use. There is also telescopic adjustment so you can dial in your optimal driving position.

Out on the road, the MX-5 RF GT seems like it has much more power than the 135kW produced by the SkyActiv 2.0L 4-cylinder engine. Having a kerb weight of just 1,087kgs to haul around, the performance is very impressive.

SkyActiv is the name given to Mazda's fuel efficiency technology and practices. By increasing compression ratios, Mazda is able to extract 15% more torque and fuel efficiency from its engines. We noticed it too, seeing a fuel consumption low of 6.7L/100km, a figure that is below the 6.9L/100km Mazda has said you can expect in the RF GT.

The manual six-speed transmission we tested was fantastic too. Great to interact with and with smooth shifts, moving the short gear stick through the gears does nothing but put a smile on your face … and switch cogs, of course.

The ride is firm but forgiving and as expected steering is precise. As far as ride and driving dynamics, the MX-5 with its near 50:50 weight distribution is a great example of a sports car. In fact, the only complaint you can really have when driving this machine will be the wind noise when travelling at speed on highways.

If you are old-school when reversing and throw your left arm around the passenger seat, you're going to cringe the first few times you reverse in the MX-5. The plastic shield between the seats is going to put paid to that and you're just going to bash your elbow and break it. You're going to need to rely on the reversing camera and an unassisted twist for reversing from now on – great for building up those obliques. 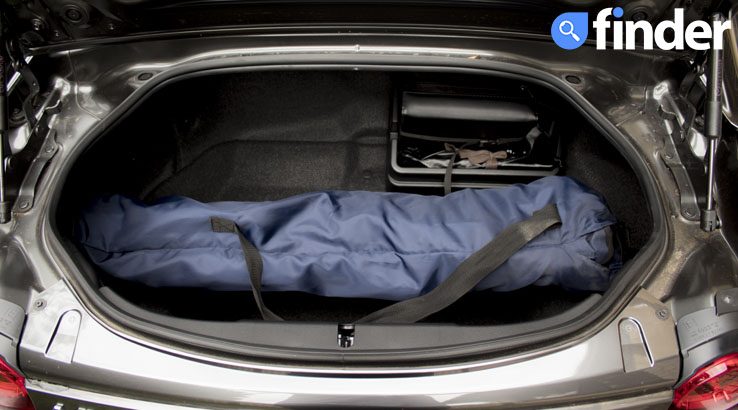 Boot space is at a premium at 127 litres. You can fit a suitcase in there, but will need to be smart about stacking due to the "stepped" layout of it. We did manage to tuck a camping chair in there although it reached the width of the boot and didn't leave much room above.

Tipping the scales at just over a tonne, this lightweight sports car is fantastic to drive and feels a lot quicker than it is.

If you are in the market for an MX-5, storage space isn't going to be a priority, but given the vehicle's size, you might want to check and see how well you fit in the car if you are six foot or over.

Another consideration is that as of 1 April 2019, all new Mazda vehicles come with five-year Premium Roadside Assistance with 24-hour roadside support across Australia.

Compare some options to finance a Mazda MX-5 RF GT