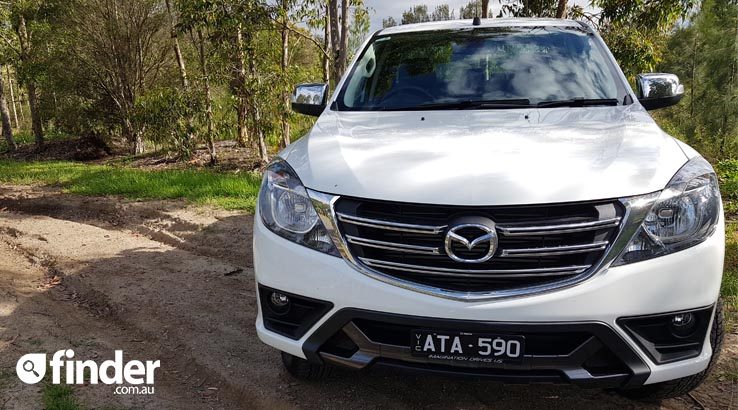 Does Mazda deserve a bigger chunk of the utility vehicle market? We test the top-of-the-line Mazda BT-50 GT to find out.

Despite being based on the running gear of the Ford Ranger, the Mazda BT-50 hasn't enjoyed the commercial success of its Blue Oval counterpart. With the Ranger shifting 3,094 units in October, only 570 BT-50s made it off the showroom floor.

We got behind the wheel of the Mazda BT-50 GT to see how it goes.

This iteration of the BT-50 was designed and developed locally, with the changes made being the most significant to date.

There is a new grille and bumper aimed at achieving a stronger road stance as well as a lower visual centre of gravity. You can notice the differences, the BT-50 does look better and tougher but the changes aren't too far from the models of previous years.

Boasting the same engine as the Ford Ranger, the 5-cylinder 3.2-litre turbo-diesel in the BT-50 is unsurprisingly quite good. Enjoyable, actually. Producing 147kW and 470Nm it offered plenty of punch after a tiny amount of turbo lag. When driving on both highway and city roads, the engine always delivered when asked and was never found wanting. This was my favourite part of the Mazda BT-50.

Mazda claimed that fuel economy in the automatic was around 10L/100km. Normally we see a number higher than this in real-life application, but I am pleased to report that we were seeing 9.8L/100km with a combination of highway and city driving.

We tested the BT-50 on a range of different roads, from the tight streets of Surry Hills and then down to Berry and back up the coast to Sydney.

The ride in the BT-50 is one of the better ones in the segment. While you do feel bumps, they aren't jarring and for the most part, the ride is quite smooth.

The steering in the BT-50 is on the heavier side and you're going to notice it in places like Surry Hills with short, tight streets. If you drive on these types of roads often, the BT-50 is probably not the car you're looking to buy.

If you enjoy driving and aren't driving on streets like that, heavier steering isn't the worst thing. It makes you feel like you are doing something and at speed it does get lighter.

My passengers appreciated the dual-climate control as I am a fan of the snap-freeze. Some heavy rain on the run down to Berry meant we also got to use the automatic windscreen wipers, which worked a treat.

The 8.0-inch touchscreen Alpine infotainment system which features Sat Nav and DAB+ isn't the greatest or most responsive, but the inclusion of Apple CarPlay and Android Auto is a bonus and makes life easier for driver and passengers. Power is available to charge various devices via a USB port as well as 2 12V ports.

In the GT model we were testing, everyone enjoyed leather seats and plenty of space. With my driving position (at just over 6ft) there was plenty of room in the back and I would have been able to stretch out, but there isn't much foot room under the front seats. 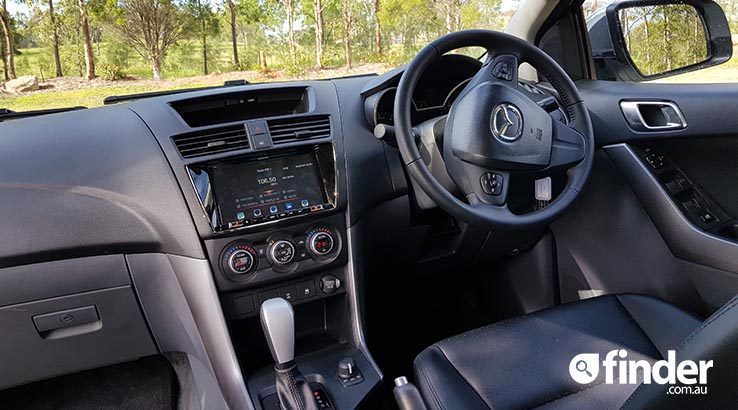 The driver and front passenger have plenty of storage room and for those interested I was able to fit a dozen Famous Berry Donut Van doughnuts in the centre console.

It is worth noting though that it doesn't include advanced features such as land departure technology and autonomous emergency braking (AEB). With that being said, it has a 5-star ANCAP safety rating.

We weren't able to take the BT-50 off-road so are keen to give you our opinions when we can get behind the wheel of it again.

With an impressive payload, 3,500 tons braked towing capacity and an impressive engine with a lot of punch, the BT-50 was enjoyable to drive. It actually put a smile on my face once the turbo spooled up.

It may not have all the bells and whistles, but it is a workhorse and great at what it does. If you are in the market for a 4x4 ute, it is worth taking the BT-50 for a test-drive. You might find that you can save a few thousand dollars when looking at equivalent competitors.

Every new Mazda is backed by its 5-year unlimited kilometre warranty.