Housemarque proves once again that it has arcade shooting honed to a fine art.

It takes a deft touch to balance chaos and control. To stimulate and challenge without overwhelming. Housemarque understands this. The Finnish studio has spent years honing the craft of controlled chaos with games like Super Stardust HD and Resogun, delivering demanding experiences that harken back to the purity of the arcade days. High scores, multipliers, that insatiable urge to play just one more game because you're this close to a new personal best - all that's missing is the rattling of coins and the unmistakeable funk of unwashed bodies. We should probably be grateful for that last one.

Housemarque's latest title, the PS4-exclusive Matterfall, maintains the studio's raison d'etre while also branching out from the traditional formula it's become known for. As a result, Matterfall represents another balancing act for Housemarque: it is neither as distilled as the retro-inspired Resogun, nor as ambitious as the recent RPG-infused Alienation. Instead, Matterfall takes the inimitable shooting of the studio's flagship titles and layers in just enough exploration, platforming and puzzle-solving to distinguish it from its predecessors.

Right off the bat, Matterfall distinguishes itself from Housemarque's typical approach to twin-stick shooting by ditching 360-degree movement for side-on platforming. Taking cues from the studio's 2011 action-platformer Outland, Matterfall features ethereal platforms that must be 'filled in' using your matter beam, a tool you'll be making ample use of throughout the game. These platforms only remain filled for a short time, leading to a number of tricky platforming sections that rely on quick reflexes and spot-on timing.

Thankfully, Matterfall controls impeccably. Movement is immediately responsive, aiming is precise and the whole thing runs without a hitch. As tough as the game gets, you'll never be left blaming loose or floaty controls for an untimely death. And die you will, especially in later levels when you're contending with endless waves of enemy fire while teleporting figures conjure giant spikes from the ground and hulking robots try to ram you off ever-narrower platforms. 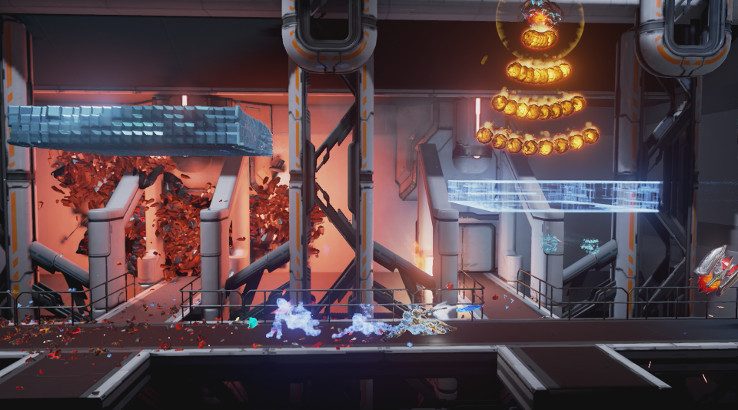 The key to surviving Matterfall's increasingly bullet-hell-like levels lies in one of the game's most satisfying mechanics: the dash. A quick tap of L1 will shoot you through bullets, enemies and even certain walls and platforms. Crucially, it also leaves any enemies in your wake temporarily stunned, buying you precious time to gather your wits before taking them out.

Simple as it is, this dash move adds a forward momentum to Matterfall's combat that most arcade shooters lack. Instead of simply hanging back and weaving in between waves of enemy fire, you're able to play more aggressively, darting from one side of the screen to the other and exploiting vulnerabilities in enemies that would normally be out of reach. This opens up a wealth of new strategic options, especially when combined with unlockable weapons like the short-range shotgun and the rebounding railgun. 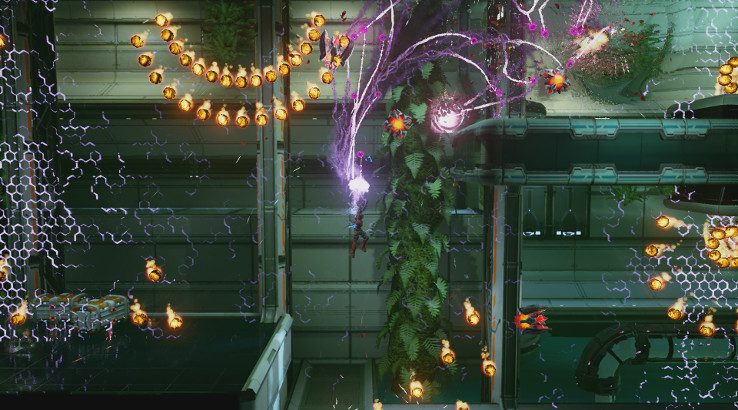 Formulating smart strategies becomes all the more important in Matterfall's boss fights. These climactic encounters are brilliantly crafted, combining inventive attack patterns with deft defensive manoeuvres that require you to switch up your tactics in order to nut out their weaknesses. Each boss is almost a puzzle unto itself, demanding forethought and planning in addition to quick reflexes.

This emphasis on diverse tactics extends to Matterfall as a whole. Each level introduces something new, whether it be the realisation that matter platforms can deflect enemy fire, or discrete zero-g sections that return the game to its twin-stick-shooter roots. The pace at which new enemy types, new environments and new ideas are introduced is as fast and furious as the combat itself.

The only downside to Matterfall's quick-fire creativity is its longevity. At no more than two hours long, the game feels like it wraps up just as it's finding its groove. Of course, like most Housemarque games, Matterfall is designed to be replayed again and again in pursuit of ever-higher scores, and there's certainly plenty of room for honing your skill and maxing out your multiplier to claim the number-one spot on the online leaderboards. But considering the game's $25 price tag, its brief runtime leaves it feeling just a little too fast-paced for its own good.

We reviewed Matterfall on PlayStation 4 with a copy provided by the publisher.

Once again, Housemarque has delivered a slick, stylish arcade shooter that dances the line between control and chaos. From the kaleidoscope of visual effects that accompany every kill, to the empowering dash mechanic crucial for keeping up with the game's relentless pace, Matterfall is a finely-honed experience that enthrals from its first pulse-pounding battle. It's just too bad the whole thing is over almost as soon as it starts.