2 April, 2018, Sydney, Australia – Most market onlookers believe the cash rate will remain static at the board meeting tomorrow (03/04/2018), but just two 25-basis-point rate rises is all it could take before some ‘risky’ mortgage holders lose grip of their repayments, according to new finder.com.au research.

Thirty one of the 32 (97%) panellists from the finder.com.au RBA survey are expecting the rate to remain on hold tomorrow (03/04/2018), with one respondent (Mark Crosby from Monash University) forecasting a rise to 1.75%.

Eighty-three percent (24 of 29) of experts and economists believe the next rate move will be an increase, while the remainder of the panel believe the Reserve Bank will stay in the cutting cycle.

finder’s new Economic Sentiment Tracker, which was introduced to the survey last month, has found household debt to be the number one area of concern for the majority (55%) of panellists.

Graham Cooke, Insights Manager at finder.com.au, says household debt is still a struggle for many Australians.

Employment is viewed with optimism among the experts and economists (65%) while the panellists mostly felt neutral (50%) or negative (15%) about the nation’s wage growth. 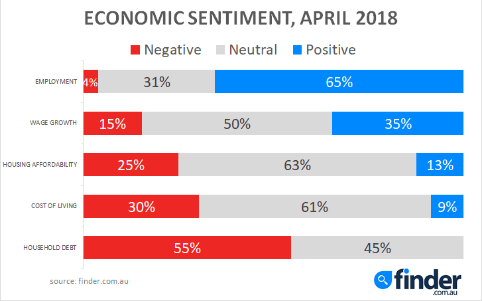 UBS Wealth Management Australia recently released a report saying 18% of the home loan market included fraudulent details on their applications. With this in mind, panelists were asked how many 25-basis-point rate increases it would take before mortgage holders started defaulting.

In response to this, 56% of experts believe up to two rate increases could cause the “risky” end of the market to default on their repayments.

Thirty-nine percent think two cash rate increases would be enough to throw homeowners into default, while a further 17% said just one rate increase would put fraudulent borrowers in a precarious position.

Panellists were asked if clearance rates will fall below 50% in 2018. Most respondents (13 of the 20 who opted in to this question) said they don’t expect to see Sydney ACRs fall below 50%.

“We’ve seen some correction in the Sydney market, with some experts indicating the market may continue to slow and we may see an average clearance rate around the 55% mark,” Mr Cooke says.

Jordan Eliseo, ABC Bullion (Hold): "The RBA will continue with their current monetary policy settings, though recent data will have dented their confidence regarding the outlook for employment, inflation and overall economic growth. We remain of the view that their next move will be a cut to the cash rate, particularly if house price weakness continues, but this will take time to play out."

Paul Dales, Capital Economics (Hold): "There are still no real signs that inflation is heading back up to the middle of the 2-3% target range, so interest rates need to stay low to give it a bit of a boost."

Saul Eslake, Corinna Economic Advisory (Hold): "Nothing has materially changed since the RBA last stated that current monetary policy settings were (in its opinion) appropriate. There’s been no new data on price or wage inflation; and the most recent labour force data suggests that the margin of spare capacity in the labour market remains unchanged, despite ongoing strong employment growth (because most of the new jobs are going to new entrants to the labour force). And the RBA has repeatedly made it clear that it feels under no pressure to follow other central banks in hiking rates."

Shane Garrett, Housing Industry Association (Hold): "The current economic environment of strong job creation and fairly weak price pressures does not merit a change in monetary policy from the RBA at this time."

Alex Joiner , IFM Investors (Hold): "There is no material change in the outlook. The labour market continues to perform well however economic activity nor consumer price/wages inflation justifies a near term adjustment of policy."

Michael Witts, ING (Hold): "The RBA will keep rates unchanged as it is looking for the economy to gather further momentum."

Leanne Pilkington, Laing+Simmons (Hold): “The residential housing market, and the economy generally, requires the steady interest rate environment to continue. Employment growth has been encouraging but tempered by flattened wage growth, while house price growth is also subdued and clearance rates are solid if unspectacular. It amounts to a prudent case of the RBA leaving rates as is."

Nicholas Gruen, Lateral Economics (Hold): "The economy has spare capacity and the bank doesn't want to cut – even though for a long time it should have."

Mathew Tiller, LJ Hooker (Hold): "The global economy has continued to show signs of improvement, despite ongoing geopolitical uncertainty. In Australia, the economy remains on a steady footing with business confidence and employment improving. However, this is yet to flow through the increased wages or consumer prices. Housing markets across the country continue to remain active with listings numbers increasing and auction clearance rates sitting just below the long-term average. More properties on the market for sale has provided more choice for buyers and when combined with the moderation of investor demand has led to a slowdown in price growth. In weighing up these variables, it is likely that the RBA will keep the cash rate at the record low of 1.50% over the short-term."

Marie Mortimer, loans.com.au (Hold): "We are speaking to a lot of borrowers who are refinancing with loans.com.au for a cheaper rate than traditional lenders because they are conscious of their household budget. The RBA are also aware of the impact on a rate rise to household budgets and we believe that rates will remain on hold in the short term due to the relatively low inflation rate and weak economic sentiment."

Stephen Koukoulas, Market Economics (Hold): "The RBA is unable to get away from its obsession with non-existant financial instability. It should be cutting rates"

John Caelli, ME (Hold): "The RBA has flagged they are in no hurry in increasing rates. They want to see inflation increase, a pick-up in wages and lower unemployment before they consider putting up rates again."

Michael Yardney, Metropole (Hold): "Despite an increasing divergence with overseas rates, the RBA will keep official rates at their historic low of 1.5% because of spare capacity in our employment markets. While the Australian economy added 17,500 jobs in February, strong population growth and increased labour-force participation meant the official unemployment rate crept up a notch from 5.5% to 5.6%."

Mark Crosby, Monash University (Increase): "Despite ‘The Donald’s’ attempts to trash the world economy, the case for the RBA raising is now very strong."

Christopher Schade, MyState (Hold): "With wages growth subdued and inflation well contained; there is no need for the RBA to rush to raise rates. We would not be surprised to see the RBA on hold for much, if not all of CY 2018."

Alan Oster, nab (Hold): "No increase until we get better wages and more consumer activity."

Matthew Peter, QIC (Hold): "No inflation to speak of, tepid growth, slowing housing market and an unsettled global outlook give the RBA more than enough reasons to remain on hold."

Christine Williams, Smarter Property Investing (Hold): "Unemployment figures have reduced slightly across most states, however individual debt has increased per capita. Banks are continuing to tighten their policy to be in line with responsible lending with owner occupier and investment property loans, thus reducing their overall risk in the property segment."

Besa Deda, St George Bank (Hold): “The inflation outlook does not warrant a near term rate increase from the RBA.”

Brian Parker, Sunsuper (Hold): "Labour market and inflation developments aren't robust enough to warrant any near term tightening, and the RBA is clearly unwilling to ease to boost growth. On hold for a long time!"

Clement Tisdell, UQ-School of Economics (Hold): "No reason for a change."