Logitech MX Vertical Mouse review: A mouse that might stop your wrists from squeaking

Quick verdict: It's a weird looking mouse for sure, but if you're struggling with discomfort from regular mice, the Logitech MX Vertical could be your ideal productivity partner. 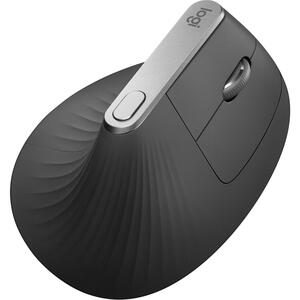 There's a growing acceptance that while many of us rely on using a computer for our day-to-day work, it's not the healthiest thing to be stuck in front of a regular keyboard and mouse all the time.

Over the years, I've tested many "ergonomic" computer peripherals. The reality of differences in human physiology means that there's no one-size-fits-all "best" ergonomic approach to mouse design. Indeed, the best ergonomic advice I've ever heard from qualified professionals is that the smartest approach is to take a break from your mouse from time to time.

The odds are good that your boss doesn't agree. That's where using specifically shaped mice with an eye towards a more natural resting position for your hands and wrists can make a lot of sense.

The Logitech MX Vertical is eye-catching and takes some time to get used to. Once you do, however, you can quite quickly start to feel the advantages of using it. Just remember to still take those breaks from time to time, okay?

Logitech MX Vertical Mouse review: The design is like an abstract sculpture… or maybe a fire in the mouse factory

As its name suggests, the Logitech MX Vertical Mouse takes a standard mouse base and then curves it up vertically.

It's a visually arresting design, one part tiny plastic volcano, one part abstract sculpture. It's the kind of item I could totally see a Hollywood set dresser using on the reception desk of a high-end quirky fashion brand, just because it looks so unusual.

However, that unusual look isn't just for show because it's a mouse that can really only be held one way – with a handshake-style grip. It also hides a surprising number of buttons. On the right side, you've got your 2 standard mouse buttons and a scroll wheel. On the top, there's a button that by default handles DPI switching. On the left, there's a thin rocker that houses 2 macro buttons, reachable with your thumb while holding the mouse properly. 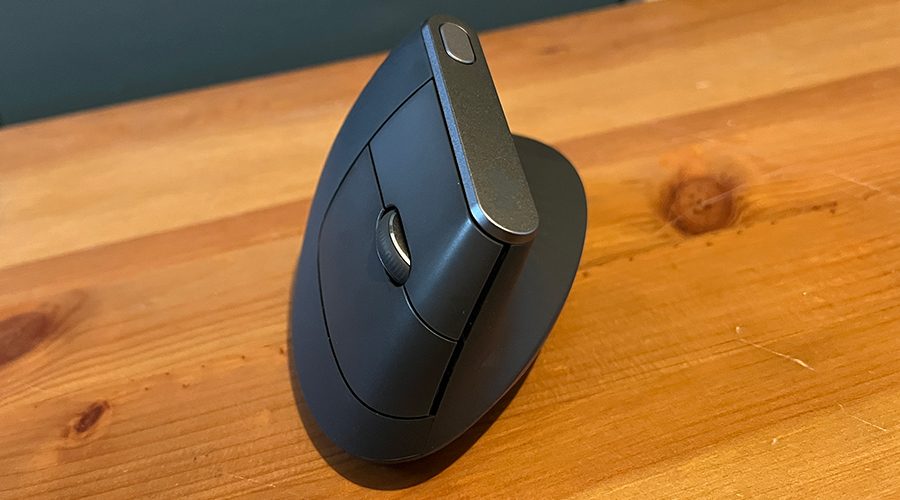 The MX Vertical is a surprisingly light mouse that relies on rechargeable batteries housed within, charged from a front USB-C type port. It'll pair with up to 3 devices via either Bluetooth or 2.4GHz USB, with one of Logitech's tiny USB receivers in the box. It's a shame then that Logitech's designers didn't think to include a small socket for the USB receiver within the body of the mouse, making it properly portable – and much less likely to be lost. 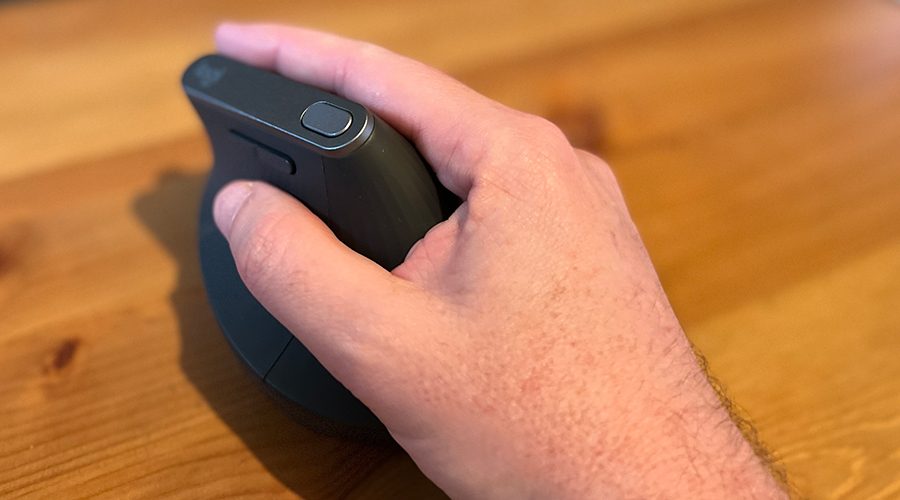 Setting up the Logitech MX Vertical isn't particularly difficult, with support for both Bluetooth and 2.4Ghz radio connectivity via one of Logitech's universal receivers. The benefit here if you have other Logitech gear is that it will all communicate through the one USB receiver.

What's substantially less simple is getting used to using the Logitech MX Vertical.

Like many ergonomic solutions, when you start to use the Logitech MX Vertical, it will feel completely unnatural. In my case, that's from decades of "regular" mouse use, not the friendliest matter for my wrists. However, it doesn't take much use for your arm to start thanking you because its handshake style grip is a more comfortable and natural one than the flat covering style most of us use for normal mice.

One big caveat here is that I'm right-handed. If your dexterity leans more towards the sinister side, or you just prefer using a mouse in your left hand, it's not going to be anywhere near as pleasant a device.

Sadly while the Logitech MX Vertical has been on the market for some time now, Logitech doesn't seem to be inclined to release a left-handed version. Don't blame me for that.

Actual response paired over Bluetooth to Mac and PC was very good during my review period, but there's a secondary wrinkle to the way the Logitech MX Vertical mouse works that won't be apparent at first.

There's a definite learning curve to its grip, but it also changes the way that you mouse across a surface because you're holding it differently. Some of that is muscle memory alone, and some of it is inherent in the grip and the way my arm moves across a desk when holding a mouse this way. Even adjusting mouse speed and DPI, I couldn't quite recreate the rapid and confident movements I'd make with a regular mouse.

Naturally, that might not be a consideration if you're talking about reducing repetitive strain injuries where a normal mouse would only make matters worse.

Logitech's claim for the rechargeable battery in the Logitech MX Vertical is that it's capable of up to 4 months of use fully charged, or for up to 3 hours from a minute's charge over USB-C. That tracks reasonably with my review period, although it is something of a concern that it doesn't use replaceable batteries. Once the Logitech MX Vertical's batteries give up the ghost, you'd need to buy an entirely new one.

Many of us spend far too long gripping mice in our daily lives, whether for work or recreation. The single best approach to dealing with the bodily strains this creates is to take regular breaks away from the keyboard, allowing your hands, wrists and arms to rest properly and naturally.

Then in the real world, the boss is breathing down your neck (which isn't healthy for other reasons, really) and it's not so easy to just stop when you should. That's where a more ergonomically friendly device like the Logitech MX Vertical could pay real dividends.

There's a definite learning curve here that will slow you down at first. You're also going to have to deal with it being less precise due to the differing movement style it uses. It's not likely to become a favourite in the pro-gaming space, for example. It's also a shame that there's no left-handed variant on offer because it's not as though the issues of constant mouse use only apply to right-handed computer users.

The Logitech MX Vertical retails in Australia for $169.95

I tested the Logitech MX Vertical over a fortnight of use as my primary working mouse. That meant it was used across both PC and Mac for the creation of reviews – including the one you're reading – as well as photo and video editing, podcast editing and general web browsing and computer functions. It was also tested against a range of games, not because it's a gaming mouse to speak of, but simply to assess how well it handled more precise movements with speed. The unit of the Logitech MX Vertical was supplied to me by Logitech for the purposes of review.