How to watch World Rugby Sevens Sydney live and free 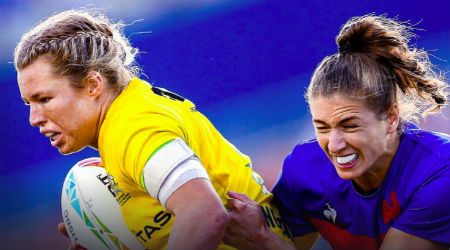 The Kiwis are proving hard to catch in both competitions this season after producing a shutout in Hamilton. Here's how to watch the World Rugby Sevens Sydney leg.

With the Tokyo Olympics looming large on the horizon, the World Rugby Sevens Sydney offers the Australian teams a chance to continue preparations and try to close the gap.

After a silver medal behind South Africa in the opening men's round in Dubai, New Zealand have won the past two gold medals to stake their early claim for 2020 World Rugby Sevens favouritism. South Africa and France are second and third respectively.

An improved bronze medal showing in Hamilton lifted the Aussies up to fifth in the standings and they will be hoping to climb even higher when they compete in front of their home fans.

It's a similar story on the women's side, where the Kiwis took out bronze in the first round in the US before reeling off three straight golds to firmly take over top spot. The Australian women are their closest pursuers, 12 points behind in second with 4 events remaining.

Below is all the information you need to tune in.

When is World Rugby Sevens Sydney?

The Australian leg of the World Rugby Sevens is being held at the new Bankwest Stadium in Sydney over 1-2 February. The opening match is the US vs Fiji women commencing at 9:30am AEDT on Saturday 1 February. The Americans are also in the first men's match, taking on Scotland at 11:57am AEDT that same day. Matches are played throughout the two days until the finals are held on Sunday evening.

Who is playing in the World Rugby Sevens Sydney?

Once again there will be 16 men's teams competing in World Rugby Sevens Sydney and 12 women's sides. You can see the full breakdown of the groups below.

How to watch the World Rugby Sevens Sydney

We have compiled a full breakdown of your viewing options to watch the Rugby Sevens World Tour. So here we'll just list the best option available for you. It is not available on free-to-air television in Australia.

Kayo Sports has every remaining stop on the World Rugby Sevens Tour live and in HD, one of more than 50 sports for you to choose from.

Kayo starts from $25/month for a Basic Subscription and the option of watching on two screens or devices. For $35/month a Premium Subscription gives you an additional screen. Kayo also offers a 14-day free trial so you can check it all out at zero cost.

They also offer a range of features, such as SplitView, where you can watch up to 4 sports at once. So if you were keen to tune in to World Rugby Sevens Sydney and some of the new Super Rugby season at the same time this weekend, you can do exactly that and more. Kayo also has the Six Nations which begins this weekend.

Kayo is compatible with Android and iOS devices, PC and Mac. It's also available on Apple TV, Telstra TV, Chromecast, Android TV, AirPlay or Samsung TV (2018 models or later). You can also check out our full Kayo Sports review for more information.

Pool B: Canada, US, Fiji, Brazil