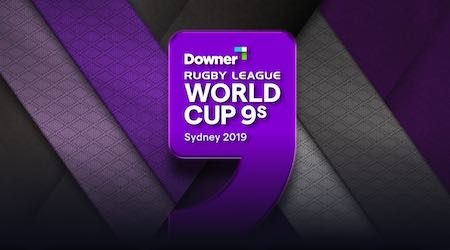 The inaugural Rugby League World Cup 9s is on this weekend. Find out how you can see every try and match live.

SUMMARY: The Rugby League World Cup 9s is live and exclusive to FOX SPORTS, meaning the best option is to watch through Kayo Sports. You can watch the entire World Cup 9s for free using this 14-day trial. This gets you access to all its unique features and 50 additional live sports.

The NRL Grand Final was less than a fortnight ago, but rugby league is already back. The inaugural Downer Rugby League World Cup 9s will take over fans' screens on Friday night and all of Saturday. There'll be 12 nations from around the world competing in the tournament.

Rugby league 9s is a thrilling, fast-paced format of the sport. As the name suggests teams only play with nine players at once and each half lasts for nine minutes.

Australia will head into the international tournament as favourites. However, the unpredictability of 9s footy means the Kangaroos are no guarantee to win. Other rugby league heavyweights such as New Zealand and England will be hard to beat.

Then there's Pacific island challengers Tonga, who have shaken up international rugby league. Fiji are somewhat specialists at 9s footy too. The rugby-loving island nation won its only ever Olympic gold medal in the similar rugby 7s format in 2016.

When is the Rugby League World Cup 9s?

The Rugby League World Cup 9s will be held on Friday 18 and Saturday 19 October.

Where is the Rugby League World Cup 9s?

Bankwest Stadium in Parramatta will host every single match over the two days.

There are just four nations in the women's tournament with Australia, England, New Zealand and Papua New Guinea competing.

The men's nations are split up into three different groups comprised of four teams. Each team plays all other nations in their group once.

For the women, things are simpler as there's only a final. The final will be contested by the two top teams at the end of group play.

As we already stated there are noticeable differences in both playing time and players on the field. Those aren't the only changes:

All matches of the World Cup 9s are live and exclusive to FOX SPORTS. To put it simply this means you can only watch in Australia via Foxtel or Kayo Sports.

Below we'll break down all of your options, but if you're after the best option the answer is Kayo. You can watch now with a 14-day free trial.

Overseas viewers are limited solely to Watch NRL and can sign up here.

How to stream with Kayo Sports

Kayo Sports is Australia's leading sports HD streaming service with over 50 sports. You can sign up for a subscription to Kayo starting at $25/month, which gives you access to watch on two separate screens at once. Otherwise there's the Premium subscription for $35/month, which lets you watch from another additional device for a total of three simultaneous streams.

Kayo comes with an array of features for viewers too. Most notably for this weekend is SplitView where you can watch four different programs at once and Interactive Stats to keep track of the most outstanding players.

Maybe you won't be home to see every game live. To overcome this turn the No Spoilers function on so you can catch up without knowing the final score. For further information and to see the rest of Kayo's features read our full Kayo Sports review.

Kayo is available to watch via an app on all iOS and Android devices. You can get Kayo on your TV with Apple TV, Chromecast, Android TV and Telstra TV. Or you can watch on the website from your PC, laptop or Mac.

How to watch on Foxtel IQ

The FOX SPORTS channels are available as part of Foxtel's Sport pack for $29/month. World Cup 9s matches are also available in 4K, which can be accessed via the HD pack for $10/month. Existing customers can simply add this onto their current plan.

Meanwhile for new customers you can sign up and watch sport in 4K on Foxtel IQ for $68/month. There may also be potential waiting periods and installation costs. Subscribers can also watch via Foxtel GO.

How to stream via Foxtel Now

Foxtel Now like Kayo streams sport in HD. The Sport pack is again $29 month, but it's also mandatory to have the base Essentials pack which costs $25/month. This brings your monthly bill up to $54/month, which is again quite expensive if you're solely after sports content.

If you find yourself overseas this weekend, then don't sweat. You can still watch every World Cup 9s game live thanks to Watch NRL. Watch NRL is the only offical licensed product that has access to the NRL, State of Origin and World Cup 9s.

There are three different subscription bundles offered by Watch NRL. There's a weekly, monthly or yearly pass to pick from. These options are priced at $19, $33 and $189 respectively.

Matches can be paused or rewound live, plus you can download matches to view offline. You can sign up for Watch NRL here.

Fortunately, Watch NRL is also compatible with several devices. You can watch on computers via the Watch NRL website. Download and stream via the app on iOS and Android devices. You can also then connect with Airplay or Chromecast to watch on the big screen.

Travelling abroad? Watch the NRL finals live for as little as $33 from Watch NRL

If you're travelling outside of Australia, you can stream the NRL Premiership on PC, iPhone, Android or TV (using Chromecast or AirPlay) with Watch NRL's app. Sign up now.