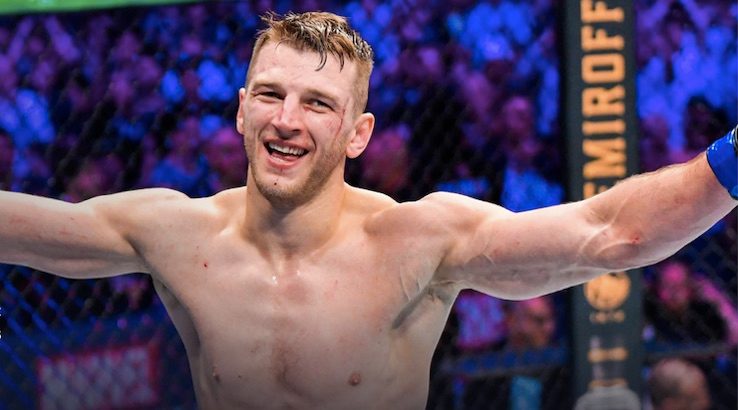 Paul Felder and Dan Hooker have been following similar trajectories of late. Who will prevail and move on to bigger and better things?

SUMMARY: The best-value-for-money option when watching the Fight Night 168 live is through Kayo Sports. You can watch the entire card for free using this 14-day trial. This gets you access to all its unique features and 50 additional live sports.

The 30-year-old Hooker is on a 2-fight winning streak. He has an overall record of 19 wins and 8 losses. His last defeat came against Edson Barboza in December 2018.

Despite being 4 years older, Felder (17-4 record) has less experience. He has also won his past 2 contests, including a split decision win over Barboza at UFC 242 in September last year.

The co-main event features light heavyweights Jimmy Crute and Michal Oleksiejczuk on a night boasting 13 fights in total for the Kiwi MMA-loving public.

When does UFC Fight Night 168 Felder vs Hooker start?

The preliminary bouts get underway at 8am AEDT with seven fights scheduled. The main card starts at 11am AEDT with a further six fights.

Where is UFC Fight Night 168 Felder vs Hooker?

UFC Fight Night 168 is being staged in front of what's sure to be a full house at the 12,000-capacity Spark Arena in Auckland, New Zealand.

How to watch UFC Fight Night 168 Felder vs Hooker

ESPN is the host broadcaster for UFC Fight Night 168. That means Kayo Sports, Foxtel iQ, Foxtel Now, Fetch TV and UFC Fight Pass are all viewing options. If you don't have a Foxtel subscription, Kayo is the place to be. We have compiled a complete viewing guide for the UFC for you.

Starting from just $25/month for the Basic subscription, which gives you access to 2 screens or devices, Kayo Sports has coverage of over 50 sports. It also has a Premium subscription that gives you another device for an extra $10/month.

Before deciding which option is the best for you, there is a 14-day free trial. Kayo also has a range of special features such as SplitView, which allows you to watch four events on the same screen. Interactive Stats, No Spoilers, Key Moments and Kayo Minis are other options.

Kayo is compatible with iOS or Android devices or you can access it via the web. PC, Mac, Apple TV, Telstra TV, Android TV, Chromecast and Samsung TV (2017 models or later) are all viable options. For more information check our detailed Kayo Sports review.

UFC Fight Pass is the fight giant's own streaming service. You can choose to pay either $10.99/month or $104.99 for an annual pass. It gives you access to every UFC event, including pay-per-view. It's compatible with smartphones and laptops, Xbox One and Xbox 360, Apple TV, Chromecast, Roku, Samsung and LG Smart TVs.

Who will win Felder vs Hooker?

This is a match-up of two fighters desperate to work their way up to higher honours. Hooker is considered a fighter on the rise, while at 34 years old, Felder's opportunities are starting to slip.

Felder is known as a power puncher and can also absorb a lot of damage, but is only an average wrestler compared to some in the lightweight division. Hooker can counterpunch with the best of them and is known more for his finesse than brawling ability.

It's a fight expected to feature plenty of action and one that has divided the experts. We'll opt for a Hooker victory by split decision in front of his home crowd.