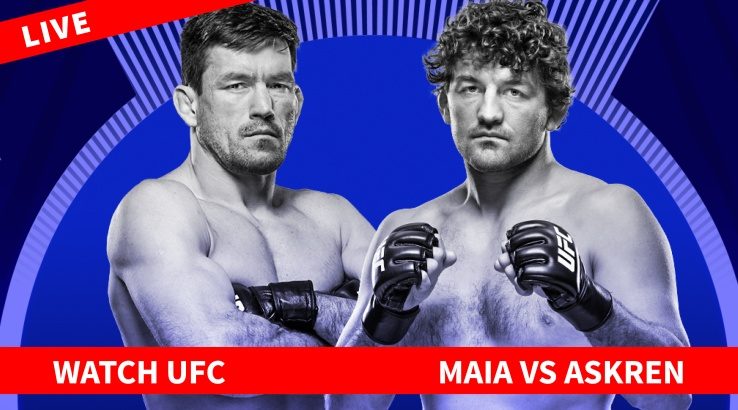 Watch Damien Maia take on Ben Askren in what's shaping up to be a UFC welterweight bout to remember.

Besides the headline event, the full card packs some exciting clashes, so MMA fans have plenty to look forward to. Fighters to watch include Ciryl Gane and Movsar Evloev, with a lightweight bout between Michael Johnson and Stevie Ray also likely to draw plenty of interest, too.

When does UFC Fight Night 162: Maia vs Askren start?

UFC Fight Night 162: Demian Maia vs Ben Askren starts on Saturday 26 October, with live coverage on ESPN beginning at 9pm AEDT. You can tune in around 11pm AEDT to catch the main card. Or, you can watch UFC Live and the pre-show from 8pm AEDT. The event will run late into the night, with the post-show scheduled for 2am AEDT.

In Australia, UFC Fight Night 162 will be broadcast on ESPN, so there's plenty of ways you can tune in. You can watch on TV or live stream the fight via Kayo Sports, Foxtel Now or UFC Fight Pass. Here's everything you need to know to make sure you won't miss a minute of the action.

Kayo Sports offers coverage of over 50 sports from all over the world, including exciting MMA action. The UFC Fight Night 162: Maia vs Askren event will be streamed live, but fans who are unable to tune in can enjoy a replay that will be available soon after the coverage concludes.

A Basic subscription to Kayo Sports costs $25/month and lets you stream on two screens at the same time, while a Premium subscription supports three simultaneous streams for $35/month. Either way, new users get a 14-day free trial.

The service comes with features meant to make sports streaming a breeze. SplitView lets you watch up to four videos at once on the same screen, Interactive Stats opens you up to an entire world of facts and figures, while No Spoilers lets you keep scores hidden when you can't watch live. If you're running late, Key Moments enables you to go straight to the action that matters in selected matches and a Kayo Mini delivers a short recap of important games in less than 20 minutes.

Subscribers can access Kayo Sports via web or you can download the app to your smartphone/tablet. Keen to watch on TV? The platform also works with Apple TV, Chromecast, Telstra TV and Android TV. We have a detailed Kayo Sports review for those eager to learn more about the service.

UFC Fight Night 162 will be live on ESPN, so MMA fans can watch on TV with a Foxtel IQ subscription that includes the Sport channel pack. Or, you can stream the action to your laptop or mobile device with Foxtel GO or WatchESPN. Both apps are free with your Foxtel subscription with the Sport pack.

Besides access to 13 sports channels, Foxtel users also get the iQ4, the telco's set-top box that lets you record live TV and watch content in 4K quality. Foxtel IQ deals are always available, so you can save on fees if you decide to subscribe.

Additionally, UFC Fight Night 162 will also be available on Foxtel Now, since ESPN is part of Sport pack. The pack costs $29/month on top of the base Essentials pack, which is $25/month. You can access the platform on web and mobile devices via the Foxtel GO app. Or, you can watch Foxtel Now with Chromecast/Airplay, PS4, Sony Android TVs, Telstra TV and the Foxtel Now box. New subscribers get a 10-day free trial.

ESPN is available on Fetch TV, as part of the Vibe channel pack. Vibe costs only $6/month. However, the total price of your subscription will depend on whether you bought your Fetch box outright or got it through a broadband provider.

Diehard MMA fans can watch the Singapore event on UFC Fight Pass as well. The official streaming platform lets you enjoy all sorts of UFC goodness, with plans at only $7.99/month. UFC Fight Pass is compatible with PCs and Macs, smartphones and laptops, Xbox One, Xbox 360, Apple TV, Chromecast, Roku, Samsung and LG Smart TVs.

Besides the main Maia vs Askren bout, there's plenty to look forward to as far as the Singapore UFC is concerned. Here's the full card for the night:

Who will win Maia vs Askren?

Maia is coming off two wins this year, against Lyman Good and Rocco Martin, so he should be in good spirits. He also has a successful career already under his belt, considered to be one of the best wrestlers in the sport. He's probably looking forward to continuing his winning streak.

On the other hand, Askren is an Olympic wrestler eager to show off his skills, so he's going to be a worthy adversary. He made his UFC debut against Robbie Lawler in early 2019 and managed to make headlines after being violently knocked out with a flying knee just five seconds into the first round of his bout with Jorge Masvidal back in July. Needless to say, he should be desperate to get back into the winning column. We'll have to wait and see which of the two talented fighters will come out on top.