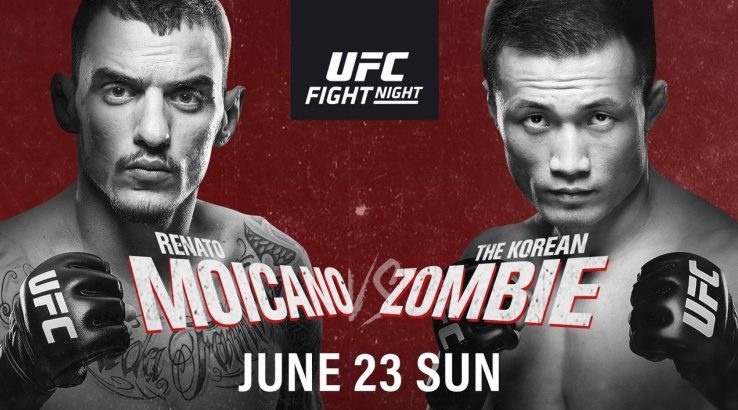 Renato Moicano comes head-to-head with Chan Sung Jung during UFC Fight Night 154. Aussie fans can watch the action live on TV or stream it via the Internet for free.

There's a jam-packed UFC fight calendar in 2019, and on June 23 the main event if UFC Fight Night 154. A five-round men's featherweight clash between Renato Moicano and Chan Sung Jung, also known as The Korean Zombie, leads the bill. Both fighters are coming off loses, so their encounter should be well-worth your time, with plenty of potential for fireworks.

Moicano lost to the great José Aldo back in February, while Jung was beaten by Yair Rodriguez last November. Due to injuries and military service, this will only be Jung's third fight in almost six years. Anything could happen in Moicano vs Jung the Korean Zombie.

Elsewhere on a packed Main Card, Rob Font was supposed to fight John Lineker at UFC Fight Night 154 in what would have been a rematch of their 2016 bout. That battle was won by Font, but Lineker has been a late scratching and won't be able to take his revenge. It remains unclear at this point if Font will still fight a late arrival.

When does UFC Fight Night 154 Moicano vs Korean Zombie start?

In Australia, UFC Fight Night 154 will air live on ESPN Sunday, 23 June, from 6:00 am. The coverage will start with a pre-show. Then, from 7:00 am you can catch the UFC action, starting with the preliminary card and continuing with the main fights from 9:00 am. The event will conclude with a post-show scheduled from 12:00 pm.

How to Watch UFC Fight Night 154: Moicano vs Sung Jung

Unlike the main numbered UFC fights, such as UFC 238, these battles are not restricted to the pay-per-view Main Event broadcast. In fact, you can watch it on your TV or live stream UFC Fight Night 154 to your favourite device, using one of the options below.

Kayo Sports offers live and on-demand coverage of over 50 sports, including content from ESPN. As a result, Kayo Sports provides the cheapest and best way to easily live stream UFC Fight Night 154. A Basic subscription costs $25/month and enables you to watch on two screens at the same time, while a Premium subscription lets you watch three simultaneous streams for $35/month.

Either way, you get a 14-day free trial to see what the service is all about, which will get you through two UFC weekends.

Besides offering access to tonnes of competitions from all over the world, Kayo Sports also boasts several features likely to appeal to sports fans. You can watch up to four events on the same screen on selected devices thanks to SplitView, or tune in only for the highlights with Key Moments.

There's also a No Spoilers setting that prevents you from finding out the outcome of an event when you're running late. As for Kayo Minis, this feature lets you watch condensed versions of key match-ups that round up to about 20 minutes. Kayo Sports is available on PCs and Macs, iOS and Android devices, and through your TV via ChromeCast, Android TV, Apple TV or Telstra TV.

To watch ESPN via Foxtel IQ, you'll need a Foxtel Pay TV subscription, which includes the installation of cable or a satellite, and a set-top box. If you already have Foxtel IQ, to access EPSN you just need to add on the premium Sports Pack and (potentially) the HD Pack. Foxtel IQ has the benefit of allowing you to record content, watch non-sport content, and watch some content in 4K, but the base cost is $68 per month.

Once that's done, however, you can also live stream UFC Fight Night 154 with the Foxtel Go app, free for all Foxtel subscribers, or the WatchESPN app, free for Foxtel Sports Pack users.

If you don't have pay TV, but still want to enjoy Foxtel's additional non-sport programming, Foxtel Now is a worthy alternative. The platform offers content live and on demand, allowing you to catch up with your favourite shows and events via the Internet.

To watch UFC Fight Night 154 with Foxtel Now you will need the Sports Pack, which costs $29/month. Note that Sports is a premium channel pack, so you also have to get the Essentials Pack to gain access to it. Essentials offers a mix of Lifestyle and Pop channels for $25/month. So your baseline total per month for this service is $54 per month.

Foxtel Now comes with a 10-day free trial for new users. You can watch on PCs and Macs, on iOS or Android smartphones and tablets, and on a TV via Chromecast, Airplay, Telstra TV, PS4, Sony Android TVs or the Foxtel Now Box.

ESPN is also available with Fetch TV, as part of the Vibe channel pack. The channel pack costs only $6 per month. The total price of your subscription, however, will depend on whether you get your Fetch box through a broadband provider or buy it outright.

Finally, you can stream UFC Fight Night 154: Renato Moicano vs Chan Sung Jung with UFC Fight Pass, the international platform that lets you see the entire world of MMA through the convenience of your TV, laptop or mobile device.

Plans start from $7.99/month and there's a 7-day free trial for new users. The app works with PCs and Macs, smartphones and laptops, Xbox One, Xbox 360, AppleTV, Chromecast, Roku, Samsung and LG Smart TVs. The downside with this service is that you only get UFC for the price, and not the multitude of other sports, or unique viewing features, of Kayo Sports.

While the fight between Renato Moicano vs Chan Sung Jung will headline the UFC Fight Night 154 event, there are several other encounters to look forward to. Here's the complete card: