How to watch UFC 247 Jones vs Reyes live in Australia

How to watch UFC 247 Jones vs Reyes live in Australia 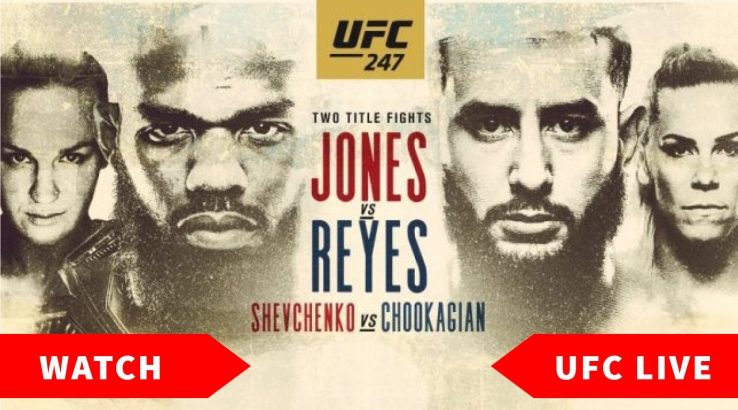 Jones vs Reyes is one of two title fights on the main card at UFC 247 in Houston, Texas.

Jon Jones is acknowledged as being among a small handful of the best mixed martial artists of all time. He is currently ranked the No.1 pound-for-pound fighter in the game. Standing in his way is fellow American Dominick Reyes.

At 30 years of age, "The Devastator" is two years younger than Jones and has considerably less experience. Jones' record stands at 25 wins and 1 loss, a controversial disqualification way back in 2009. Reyes is a perfect 12-0, including an impressive knockout of another former UFC champion Chris Weidman in October last year.

The co-main event of the night is another title showdown between Women's Flyweight champion Valentina Shevchenko and Katlyn Chookagian.

It all starts at 10:30am AEDT on Sunday, 9 February with 3 early prelims. There are another 3 fights on the preliminary card before the main events kicks off at 2pm AEDT. Heavyweight Derrick Lewis gets things underway on the 5-fight main event. Jones and Reyes should square off around 4pm AEDT.

Check out our 2020 UFC schedule here.

How to watch UFC 247 Jones vs Reyes

There's a range of viewing options for UFC 246. ESPN is showing the preliminary card, while the main card is exclusive to pay-per-view on Main Event. You can see our complete guide to watching the UFC here.

How to watch UFC 247 Jones vs Reyes preliminary card

How to live stream UFC 247 via Kayo Sports

Kayo has more than 50 sports for you to choose from, including access to every single UFC Fight Night. You can get a Basic Subscription to Kayo for $25 a month which allows you to watch on 2 screens. For $35 a month a Premium Subscription gives you 3 screens.

Currently, there's a 14-day free trial so you can see if Kayo is right for you.

How to watch Jones vs Reyes UFC 247 Main Card

When it comes to the 5-fight main card, Main Event on Foxtel, UFC Fight Pass, Fetch TV and PS4 are the exclusive providers. You will need to purchase the fight to watch it live or catch a replay, unless you are heading to your local watering hole. Read on to find out more about watching the UFC 247 main card.

If you have a Foxtel subscription, UFC 246 will set you back $54.95. You can place an order via the Main Event website, using the My Foxtel app, your Foxtel remote or over the phone. You can also order the fight over the phone if you have Optus TV featuring Foxtel. Ordering through a phone agent will incur an additional $2 booking fee.

The UFC's official streaming platform is another option for watching the excitement machine that is Jon "Bones" Jones. It will cost you $54.95 through UFC Fight Pass. You can also sign up to Fight Pass for $10.99 per month or $104.99 for an annual pass.

How to watch Jones vs Reyes on your PlayStation 4

If you have a PlayStation 4 console, look for Live Events in the PS store. Once you have purchased the fight you can watch it through the "videos" menu. It is $54.95 or $49.95 for PlayStation Plus members.

How to watch UFC 247 with Fetch TV

Jones vs Reyes will also cost you $54.95 with Fetch TV. Using your Fetch box, go to "manage" and then "subscriptions". Once you have made the purchase you can watch it on TV or your mobile with the Fetch app.

Which pubs are showing Jones vs Reyes?

The following pubs have Foxtel and therefore access to Main Event. However, they may not choose to show the fight so make sure you ring ahead before making the journey.

Who will win Jones vs Reyes?

Let's be honest here – is anyone prepared to tip against Jon Jones? Whenever "Bones'" latest fight is announced, he prepares, he enters the Octagon and he wins. The sky is blue, water is wet, etc, etc.

In the fight game, anyone with a half-decent punch or kick in their repertoire does have the ability to stun any opponent on their day. Reyes has a strong record and has beaten some well-credentialled fighters. UFC commentator Joe Rogan does give him a chance of a huge upset.

But Rogan also expects Reyes to bring the best out of Jones and for the title-holder to continue on his merry way. As do we. We'll opt for a third round knockout.