How to watch UFC 245 Usman vs Covington live in Australia 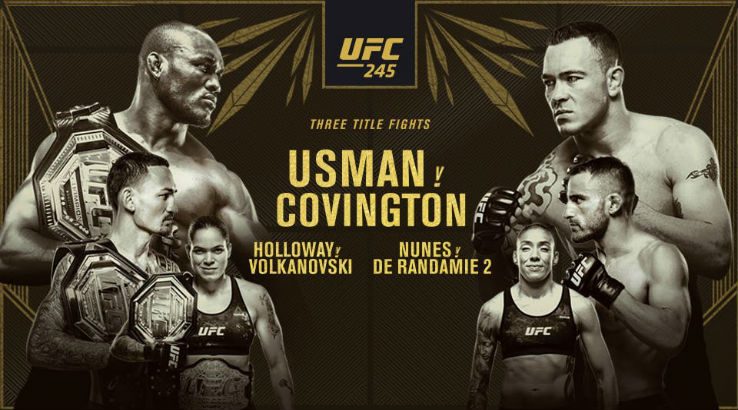 The UFC regularly offers up some juicy match-ups, but that's accentuated when the two protagonists genuinely don't like each other.

That will be the case when UFC welterweight champion Kamaru Usman takes on Colby Covington on a stacked card at UFC 245 on 15 December.

Accusations of using performance-enhancing drugs are just some of the barbs that have been flying from Covington's camp ever since Usman secured the title with his victory over Tyrone Woodley at UFC 235 back in March.

With both fighters on long winning streaks and carrying identical 15-1 records, something has to give in a match-up fans have been eagerly anticipating.

When does UFC 245 Usman vs Covington start?

The preliminary card starts on Sunday 15 December at 12pm AEDT. The main card will start at 2pm AEDT.

Where is UFC 245 Usman vs Covington?

UFC 245 is taking place at T-Mobile Arena in Las Vegas.

How to watch UFC 245 preliminary card

As many fight fans following along at home would be accustomed by now, the main card is only available on pay-per-view, but you can catch the preliminary card first on ESPN. That gives you a variety of options, including Kayo Sports, Foxtel and Fetch. Let's take a look at those options:

How to live stream UFC 245 on Kayo Sports

With coverage of more than 50 sports available on Kayo Sports, you are well and truly spoiled when it comes to options. That includes a number of mixed martial arts events, as ESPN broadcasts plenty of UFC events live.

You also gain access to a wide array of content in the Kayo library along with a number of exciting features so you can stream your favourite events whenever it suits you.

SplitView lets you watch up to four videos at the same time on the same screen on selected devices. Interactive Stats gives you all the numbers you could possibly need during a fight. No Spoilers is perfect if you need to watch an event on delay or you can jump to the main highlights with the Key Moments function.

There are also Kayo Minis for those quick catch-ups in 20 minutes or less, which are available shortly after events conclude.

The Basic Kayo Sports subscription costs just $25/month and lets you stream on two different devices at the same time. A Premium subscription allows you to watch on three devices simultaneously for $35/month.

Kayo also offers you an option of watching UFC 245 for free courtesy of its 14-day trial, giving you ample time to decide if it is the right platform for you.

Kayo Sports is available by downloading the app to your iOS or Android smartphone or tablet and via its website. It's also compatible with Chromecast, Apple TV, Telstra TV and Android TV. We've put together a complete Kayo Sports review so you can see exactly what the service has on offer.

How to watch UFC 245 with Foxtel iQ

If you have an existing Foxtel iQ subscription, you have access to ESPN if you have signed up to the Sports HD pack at $25/month. Therefore you can watch the UFC 245 preliminary card on your television or stream it to your mobile or laptop with Foxtel GO or WatchESPN. Both are free with your Foxtel sports pack.

Subscribers also get Foxtel's advanced set-top box, iQ4, that lets you record live TV and watch content in 4K. Adding the sports channel pack to your Foxtel Plus ($49-month) pack subscription will cost $74/month in total.

There are always deals being offered for Foxtel iQ, where you can save on fees and installation costs, so keep an eye out for those.

How to live stream UFC 245 with Foxtel Now

Foxtel Now is another platform that lets you stream ESPN. To access the Foxtel content live you will need the Sport pack, which is $25/month. That is on top of the Essentials pack ($29/month), which boasts a number of lifestyle and pop channels. In total you will pay at least $54/month for Foxtel Now with the Sport pack.

It can be accessed via the website or by using your smartphone or tablet with the Foxtel GO app. It's also compatible with Sony Android TVs, Telstra TV, Chromecast/Airplay, PS4 and the Foxtel Now box.

For new subscribers, there is a 10-day free trial on offer to see if it is right for you.

How to watch with Fetch TV

Fetch TV is another option as part of the Vibe channel pack ($6/month), which offers ESPN. The total price of your subscription depends on whether you purchased a Fetch box through a broadband provider or if you bought it outright.

While Kayo Sports, Foxtel and Fetch TV let you watch or stream the preliminary card, you can only access the main card via pay-per-view. That means you will need to purchase the fight to watch it live and here's how:

If you're a Foxtel subscriber, you can simply order UFC 245 Usman vs Covington using your remote control or phone, via the Main Event website or the My Foxtel app at a cost of $54.95. You can also access it if you're an Optus TV featuring Foxtel user but can only book via phone, which will incur an additional $2 booking fee.

There are also a number of replays available if you buy the event on PPV.

The costs range from $60.49 to stream the event in SD, $71.49 for HD or there are special deals. You can get the PPV bundled with a discounted 6-month subscription for $98.46. There are also monthly and annual pass options as well as a seven-day free trial for new subscribers. You can read more in our full Fight Pass guide.

How to watch on your PlayStation 4

How to watch with Fetch TV

You can purchase UFC 245 via Fetch at a cost of $54.95. On your Fetch box, go to "Manage" then "Subscriptions" to order it. You can then watch it on your television on Channel 991 or on your mobile via the Fetch app.

Which pubs are showing UFC 245?

These pubs have access to Foxtel and Main Event, so they may show UFC245. Though you should check with them before hand to avoid disappointment.

Here's the full card for the highly anticipated UFC 245 event:

Who will win Usman vs Covington?

While there is plenty of bad blood between these two fighters, there are also a number of similarities in the way they fight. It has been billed as a grappling and wrestling extravaganza, although their striking abilities also shouldn't be underestimated.

Fans will be hoping for a long, drawn-out fight with plenty of action and most pundits seem to be favouring Usman in a fairly tight contest. The 32-year-old Nigerian-American was impressive in his win over Woodley.

Usman has a slight height advantage and a significant 10cm reach advantage, which could help him stay out of Covington's way. Not always a favourite in the eyes of UFC fans, Covington relishes the villain tag and will be aiming to back up his words.

We're expecting a close-fought battle, with Usman to emerge on top.

Who will win Holloway vs Volkanovski?

Australian fight fans will be tuning in to keep an eye on the co-main event featuring local hope Alexander Volkanovski. He has been moving through the featherweight division and boasts an outstanding 19-1 record.

Volkanovski launched into the sport's consciousness when he took down Brazilian legend Jose Aldo on his home soil in May. But he will have his hands full with Max Holloway, one of the most well-known and accomplished UFC fighters of his generation.

Holloway's record stands at 21-4 and he will have a 7cm height advantage over the Australian. While it feels like the Hawaiian has been around a long time, he is only 28 years old, 3 years Volkanovski's junior.

Underdog Volkanovski has talked very confidently about producing another shock, but he will have his hands full as he attempts to wrestle away Holloway's belt.