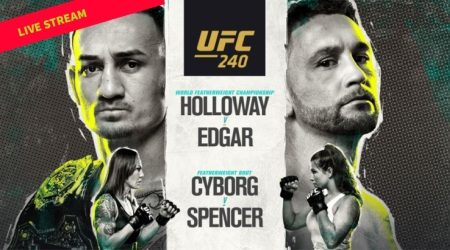 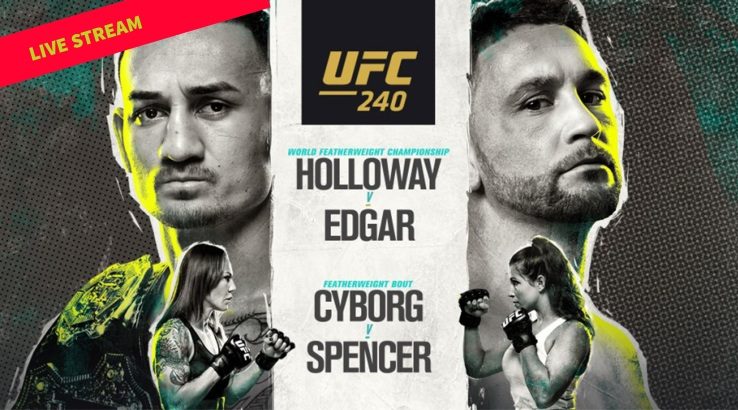 Get ready mixed martial arts fans, the elbows start flying in the headline UFC 240 event this weekend. While the main event will see Holloway vs Edgar, there are 12 fights scheduled during the broadcast, ensuring plenty of adrenaline and entertainment for fans at home.

The explosive UFC 240 will take place at Rogers Place in Edmonton, Alberta, Canada on 28 July (AEST). It's yet another big night in a stacked 2019 UFC calendar. Aussie UFC enthusiasts can tune in via a live stream, enjoy the preliminary fights on TV, or order the pay-per-view event and watch in style. Here's everything you need to know about Holloway vs Edgar, including some information on how to make sure you won't miss a minute of the action.

Who will win UFC 240 Holloway vs Edgar live?

The headline event for UFC 240 will be the Featherweight title fight between defending champion Max Holloway and former Lightweight champ Frankie Edgar. This is the third time the fight has been scheduled: both Holloway and Edgar had to withdraw in the past due to injuries. They're finally coming head to head, with Holloway's UFC Featherweight Championship belt on the line.

Holloway has had an epic 13-fight win streak to his name, managing to defeat big names like Cub Swanson and Charles Oliveira. It only recently came to an end, losing to Dustin Poirier in a rematch for the Interim UFC Lightweight Championship earlier in 2019.

Meanwhile, Edgar has won seven of nine fights after dropping to Featherweight. He was defeated by Brian Ortega via knockout last year but bounced back with a win against Cub Swanson soon after.

While the two fighters are pretty evenly matched, the odds have Holloway as favourite to win, as he has been wearing the Featherweight gold for the past two years.

When does UFC 240 start? Schedule of fights

The below times are approximate, as fights can go for different lengths. The cards generally start at the correct time, with the individual battles on each card sometimes shifting slightly.

If you're not familiar with the UFC event broadcast experience, figuring out how to tune in can be a little overwhelming. While the full card is only available via pay-per-view, you can watch the preliminary card on ESPN, as well as the pre-show, live. UFC fans can tune in on Sunday, 28 July from 8.15am (AEST) to watch the full card on pay-per-view. And you can watch preliminary fights (see the table above) live with Kayo Sports, Fetch, Foxtel or Foxtel Now.

Kayo Sports offers coverage of over 50 sports, including plenty of UFC action outside of just the main numbered events. You can get a Basic subscription for $25 a month, which enables you to watch on two screens at the same time. Or, you can get a Premium subscription for $35 a month, which supports three simultaneous streams. Whichever option you choose will unlock the entire Kayo Sports library of content, which includes sporting events available both live and on demand.

There's plenty to love about this dedicated live sports streaming service, which comes with many impressive features. This includes SplitView, which enables users to watch up to four simultaneous streams on the same screen. Interactive Stats lets you dive into a world of facts and figures, while the built-in "No Spoilers" setting keeps scores hidden from you when you're running late. Subscribers short on time can use Key Moments to go right to the action that matters in selected matches or enjoy a Kayo Mini, which is a condensed version of key sport match ups.

There's a Netflix style interface, gameday hub pages and plenty more. You can read up on all the features and more in our detailed review.

For new users, Kayo Sport offers a 14-day free trial, so effectively you can watch UFC 240 for free and try it all out. The platform is compatible with PCs/Macs, smartphones and tablets, and on TVs via Android TV, Apple TV, Telstra TV or ChromeCast.

You can also watch ESPN on your TV with a Foxtel IQ subscription that includes the premium Sport pack. This is generally priced at an additional $29 a month, but there are Foxtel IQ deals always available. You might be able to score a discount, especially if you bundle Sports with other channel packs.

Besides a generous library of live and on-demand content, Foxtel also provides subscribers with the IQ4 box, which lets you watch content in 4K and record live TV. Plus, the pay TV provider's new deal with Netflix is pretty attractive, so you might want to jump on the Foxtel wagon while the special promotions are still running.

Alternatively, you can also stream ESPN with Foxtel Now, the streaming service that brings you Foxtel content via the Internet. ESPN is part of the Sport Pack, a Premium option which costs $29 a month. You can only get it if you're already subscribed to the Essentials pack, priced at $25 a month. Essentials comes with a mix of Lifestyle and Pop channels.

UFC fans can also watch ESPN with Fetch, as long as they have the Vibe pack. This costs only $6 a month. However, the total price of your subscription will depend on whether you bought your Fetch box outright or got it through a broadband provider.

While the preliminary fights are available with ESPN, the main card is only available via pay-per-view, so you'll need to purchase it to be able to watch Holloway vs Edgar on your own terms. The UFC 240 pay-per-view event kicks off at 12pm on 28 July. You can buy it through Foxtel, Fetch, UFC TV and PS4.

How to watch UFC 240 Holloway vs Edgar on Main Event

To order Holloway vs Edgar you need to be a Foxtel or Optus TV with Foxtel subscriber. You can purchase the event for $54.95 via the My Foxtel app, online on the Main Event website, via your remote or via phone. Replays are scheduled at 6pm and every 6 hours from midnight.

How to watch UFC 240 Holloway vs Edgar on PlayStation 4

You can watch a UFC 240 live stream through a PS4 video games console. Find it under Live Events in the PlayStation Store. If you're a PlayStation Plus member, you can purchase it at a discount too. This reduces the cost from $71.49 to $64.34.

How to watch UFC 240 Holloway vs Edgar on Fetch

The pay-per-view event is also available to buy via Fetch for $54.95. To purchase a fight, simply go to "Manage" > "Subscriptions" on your Fetch box. Once purchased, you'll be able to watch it live on your TV on Channel 991 or on your mobile device using the Fetch app.

Which pubs are showing the Holloway vs Edgar fight?

Depending on how much you eat and drink, you might be better off watching the UFC encounter at your local pub. Just give it a call beforehand to make sure it will order the main event and showcase it. Below you will find a list of all the pubs in Australia with access to Main Event, which will at least start you on the right foot.