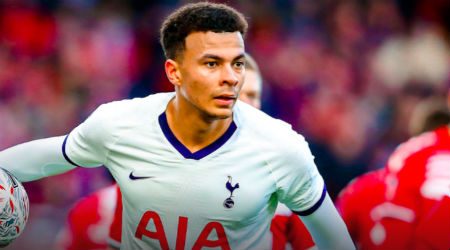 There were 8 replays required after the last round of FA Cup matches and no less than 5 of them involve Premier League teams, including Tottenham Hotspur vs Middlesbrough.

Both sides scored in the second half at Riverside Stadium and now Middlesbrough must give themselves a real shot of an upset at Tottenham Hotspur Stadium against a home side missing talismanic front man Harry Kane due to a hamstring injury.

Tottenham vs Middlesbrough pits the 8th-placed Spurs against a Boro outfit languishing in 16th in the second-tier Championship. This is how you can tune in.

When is the FA Cup 3rd round Tottenham vs Middlesbrough match?

This replay kicks off at 7:05am AEDT on Wednesday 15 January at the new Tottenham Hotspur Stadium in north London. The following day Man United vs Wolves in yet another 3rd round replay.

ESPN has the rights to broadcast the world's oldest football competition in Australia. It is showing games on both its main and HD channels. Foxtel iQ, Foxtel Now, Kayo Sports and Fetch TV are your options for this replay.

We have already put together a complete FA Cup viewing guide for you. If you aren't already a Foxtel subscriber, Kayo Sports is undoubtedly the way to go.

Kayo Sports has over 50 sports to choose from and also has a 14-day free trial so you can see all the features it has to offer.

There's a Basic subscription for $25/month which has the option of watching 2 screens or devices at once. For $10 more per month, you get 3 screens with a Premium subscription.

Features include SplitView, which allows you to watch four sports at once. There are also Interactive Stats, a Key Moments Timeline and Kayo Minis, where you can quickly catch up on the action shortly after it has finished.

There is a Kayo Sports app for iOS and Android devices for you to tune in. You can also watch through Apple TV, Android TV, Chromecast, Telstra TV, Samsung TV (2018 models or later) or from the website on your Mac or PC.

We have also compiled a comprehensive review of Kayo Sports here.

How does the Tottenham vs Middlesbrough FA Cup 3rd round replay work?

As the first match at Middlesbrough's Riverside Stadium finished 1-1, rules stipulate there will be a replay at the other team's home ground, Tottenham Hotspur Stadium. If the replay also finishes in a draw, there will be 2 periods of extra time played out in full, 15 minutes each way. If the teams still can't be separated after extra time there will be a penalty shootout.

Who will win the FA Cup 3rd round match between Tottenham and Middlesbrough?

We love fairytales and underdog stories here at Finder and wish there were more of them. If Middlesbrough found a way to overturn poor Championship form and continue a magical FA Cup run, it would be great theatre and we would be all for it.

It would also be worth it just to see Jose Mourinho's post-match press conference.

But there is a reason those fairytale runs become so legendary – they don't happen very often. Mourinho is likely to pick a reasonably strong side and they will surely be too deep and too talented at home in this one.