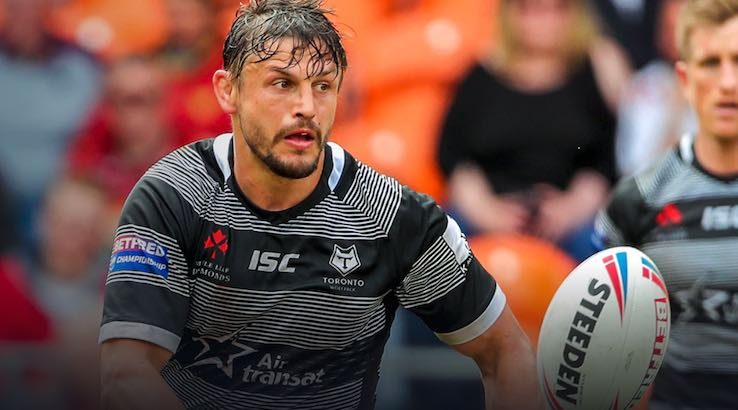 On Sunday 6 October, it's Toronto Wolfpack vs Featherstone Rovers in a play-off for £1 million and promotion to the Super League.

Toronto vs Featherstone in the Million Pound Game is on Sunday 6 October (Australian time), with a Super League berth on the line. It's a game that has £1 million up for grabs and promotion to the 2020 Super League. In other words, the stakes couldn't be higher for Toronto Wolfpack and Featherstone Rovers. This match is huge and for Australians, the NRL has nothing like it.

This game could really have huge ramifications for rugby league across the world if Toronto win. The Wolfpack would become the first Canadian side to join a top-flight competition. The Toronto club has only existed since 2016 but has achieved rapid success. Rugby league could benefit greatly from exposure into Canada and into major North American markets.

When does the Toronto vs Featherstone Betfred Championship play-off start?

The Wolfpack vs Rovers match is at Lamport Stadium, Toronto, this Sunday at 5am AEDT. It's exclusive to pay TV provider Foxtel and streaming platform Kayo Sports. Fortunately, as the match is so early you can watch the game on demand as part of your build-up to the NRL Grand Final.

How to watch the Toronto vs Featherstone Million Pound Game

Foxtel and Kayo Sports are your only two options to watch the Championship play-off match. Both Super League and Championship matches aren't available on free-to-air TV.

Kayo is a sports lovers dream, with over 50 sports to watch and features galore to enhance the viewing experience. Almost all sports are available live, otherwise you can watch on demand. Subscriptions start at $25/month for a Basic package which allows you to stream to two devices at once, or for three simultaneous streams it's $35/month for the Premium option.

To watch with Kayo you can simply log in to the website to stream to laptops or desktops. There's also an app to download to watch from iOS and Android devices. If you want to watch on the big screen, you can do so with Apple TV, Chromecast, Telstra TV and Android TV.

With so much sport on this weekend you can use the SplitView function to watch up to four sports live. Running short on time? Fire up a Kayo Mini to see a special condensed version of a fixture that takes around 20 minutes. Alternatively you can use the Key Moments timeline to jump ahead to all the highlights.

Kayo also has the most extensive coverage of rugby league with NRL, Super League, international matches including the 9s tournament, NRL All Star game and more. Jump in and test things out with a Kayo 14-day free trial.

Foxtel IQ is the only way to watch sport in 4K, but the set-up process isn't that easy. If you're a new customer this option isn't suitable. Due to the time it takes to sign up and have it installed you'll probably miss the match. If you're an existing customer you can just add the Sport HD pack for $25/month then you're good to go.

Foxtel Now on the other hand can be used by new customers to watch Toronto vs Featherstone. Foxtel Now allows you to stream programs via the Internet, though a subscription isn't very cheap. It's mandatory all customers have the base Essentials pack for $29/month and the Sport pack is another $29/month on top. That means at a minimum you'll pay $58/month.

Who will win Toronto vs Featherstone?

Starting with Featherstone there's no question the odds are stacked against them. They're lacking the same calibre of players as Toronto and weren't even expected to beat Toulouse last week. The Rovers though can embrace underdog status yet again. The best chance they have is to grind out a gritty game to break the Wolfpack's hearts for the second year in a row.

Toronto are stacked with ex-NRL players and made it to this game last year. It'd be hard to see them lose two years in a row and spend another season in the Championship. The abundance of big-match experience for the Wolfpack will likely see them win and receive promotion to the Super League.

Wolfpack outside-back Ricky Leutele is reportedly the highest paid centre in the world: that includes Roosters superstar Latrell Mitchell. Leutele won a premiership with Cronulla Sharks in 2016. This is his first year at the Wolfpack and he is easily a cut above this level of competition.

Former NRL journeyman Cameron King has enjoyed a strong season at hooker for Featherstone. He leads the club in tries with 12 for the season. If Featherstone are to cause an upset this weekend it'll hinge on King's ability to cause havoc around the ruck.

Both sides have named a 19-man squad for the game, but positions and the final make-up are yet to be finalised.