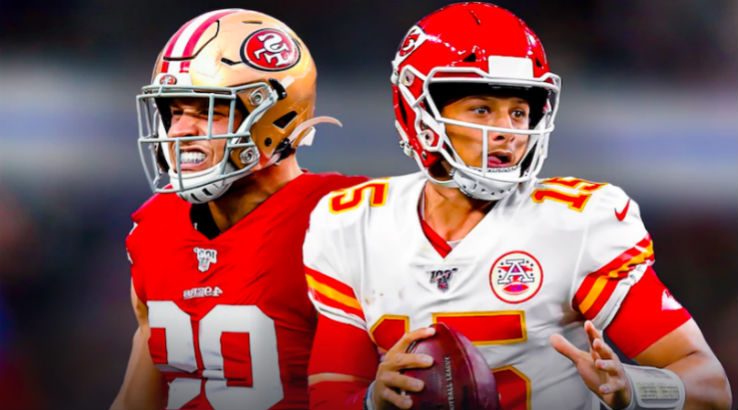 Kansas City Chiefs take on San Francisco 49ers in the NFL's Super Bowl LIV. This year it's being held at Miami's Hard Rock Stadium and here's how to watch live.

The Chiefs have been steadily building towards this moment under ridiculously talented quarterback Patrick Mahomes and veteran coach Andy Reid. They are seeking their first Super Bowl victory since way back in 1970 in Super Bowl IV.

The once-mighty 49ers have been undergoing a steady rebuild under their young head coach Kyle Shanahan. A fierce defence and the steady play of their quarterback Jimmy Garoppolo has put them within reach of a sixth NFL title. Their 5 previous wins all came in a 13-year span between 1982 and 1995.

What time does the Super Bowl start?

This is it. San Francisco and Kansas City will square off at Miami's Hard Rock Stadium, with the game commencing at 10:30am AEDT on Monday 3 February.

How to watch Chiefs vs 49ers Super Bowl LIV

On free-to-air television, Channel 7 is showing Super Bowl LIV. For subscription services and a whole lot more content, Kayo Sports and Foxtel are the way to go.

Every day in the lead-up to the huge game Kayo and ESPN have a dedicated Super Bowl carousel of films and specials. It includes the brand new documentary in the acclaimed 30 for 30 series on controversial former NFL quarterback Michael Vick.

If you have Fetch TV, you can choose either Channel 7 or ESPN. Foxtel Now and NFL Game Pass are also options. We have a full guide to the viewing options for the NFL season here.

The free-to-air broadcast on Channel 7's main and HD channels gets underway from 10am AEDT. It may also be on 7mate in some areas so check your local guides. You can also stream the game on 7plus.

As ESPN is part of the Kayo service, you get much more than just the Super Bowl itself if you sign up or take advantage of Kayo Sports' 14-day free trial.

Just one added benefit is a 30-minute show titled NFL Blitz. Produced specifically for ESPN Australia and New Zealand audiences, it is live at 7pm AEDT each day leading up to the game. Road to the Super Bowl and Super Bowl Memories are among a host of other shows dedicated to one of the world's showpiece sporting events.

Kayo's Super Bowl coverage begins the morning of at 6am AEDT, with Post Season NFL Countdown. Following that will be an exclusive pre-game show at 9am just for Australian viewers.

Kayo Sports also offers a number of special features, such as Kayo Minis. Available shortly after matches have completed, you can then watch a condensed version. Other features include SplitView, where you can watch four sports at once, Interactive Stats and Key Moments Timeline.

All up Kayo has more than 50 sports for you to choose from including a wide array of the best US sports.

The service is compatible on iOS and Android devices, PCs, Mac, Android TV, Telstra TV, Apple TV, Samsung TV (2018 model or later), Chromecast and AirPlay. You can check out our full Kayo review for more information.

A Basic subscription will cost you $25/month and that allows you to watch on 2 screens or devices at once. A Premium subscription for $10 more lets you watch on 3 screens. You can cancel your subscription at any time.

Who is performing in this year's Super Bowl half-time show?

In 2020, Jennifer Lopez and Shakira are teaming up to present the Super Bowl half-time show from Miami. The half-time show is scheduled to commence around 12pm AEDT.

Since their first meeting back in 1971, these teams have met 13 times. It can't get much tighter, with the 49ers holding a 7-6 advantage. Kansas City won the most recent encounter but that was way back on 23 September 2018. In fact they have only met twice since 2010.

San Francisco hold the longest winning streak in that time, taking out four straight games against the Chiefs between 1975 and 1991.

Who will win Kansas City Chiefs vs San Francisco 49ers?

This match-up has divided experts and casual fans alike. There is no clear-cut favourite, which is great for the neutral observer.

One thing just about everyone does agree on is that Chiefs quarterback Patrick Mahomes is one of, if not the most talented player in the NFL. If Kansas City are to break their long drought, he will undoubtedly need to have a big game.

But San Francisco are considered the best overall team. They have a strong balance between offence and defence. They rely heavily on their running game, particularly through running back beast Raheem Mostert.

Their quarterback Jimmy Garoppolo passed the ball just 8 times for a measly 77 yards in their NFC Championship clash with Green Bay, but they still won comfortably.

It is such a tight call, but Kansas City have been our Super Bowl pick basically ever since their overtime defeat to the New England Patriots in last year's AFC Championship game. We won't be wavering from that now.

The Super Bowl is usually where we see the cream rise to the top. All the focus is set to be placed on quarterbacks Patrick Mahomes and Jimmy Garoppolo, though there are still 52 players on each side.

An Australian will also be in the mix with punter Mitch Wishnowsky hoping to get the 49ers over the line. You can see the list of Australian NFL players here, but here are the Super Bowl LIV teams.

5 ways to consolidate your debt and break the cycle

SPONSORED: Find out the 5 best ways to…