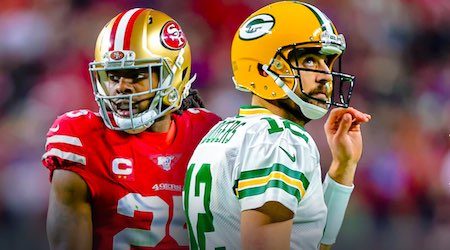 SUMMARY: The best options for watching the NFL Playoffs live are through 7mate or Kayo Sports. You can watch the entire stream the entire NFL Playoffs for free through 7Plus as well as Kayo Sports with Kayo's 14-day free trial. This gets you access to all its unique features and 50 additional live sports.

San Francisco 49ers vs Green Bay Packers for the NFC Championship. These storied NFL franchises are trying to get back to Super Bowl glory. Here's how to watch live.

It's time for the NFC Championship Game: San Francisco 49ers vs Green Bay Packers. These teams have travelled different paths in recent years to reach this stage of the season.

While the 49ers have been undergoing a long rebuilding phase, Aaron Rodgers and the Packers have generally been competitive while failing to win another Super Bowl since their triumph in the 2010 season.

When is the NFC Championship San Francisco 49ers vs Green Bay Packers game?

The NFC Championship game kicks off at 10:40am AEDT on Monday 20 January at Levi's Stadium in California. Whoever wins is destined for a showdown with the winner of Chiefs vs Titans at Super Bowl LIV.

The NFC Championship game is being shown on 7mate and 7mate HD on free-to-air television. It's also being broadcast via ESPN on Kayo Sports, Fetch TV, Foxtel, Foxtel Now and NFL Game Pass.

All your information for watching and streaming the current NFL season can be found here.

While the NFL is not shown on Channel 7's main channels, it has been broadcasting select matches during the season on 7mate. This includes the NFC and AFC Championship games on Monday morning.

It has also recently launched 7mate HD which is also showing both games. The broadcast of San Francisco vs Green Bay starts at 10am AEDT.

If you don't already have a subscription to these existing services, Kayo Sports is a great option for all sports fans. First up it offers a 14-day free trial so you can check out everything about the service before signing up.

A Basic subscription costs you $25/month and allows you to watch on 2 screens or devices. A Premium subscription for $35/month lets you watch on 3 screens. There are no lock-in contracts so you can cancel your subscription at any time.

Kayo has more than 50 sports on offer and also has features like SplitView, where you can watch 4 sports at once.

This match will be the second between the teams this season and 69th overall. The Packers lead the head-to-head record 36-31, with 1 draw. They have met in the play-offs seven times and the Packers hold a 4-3 edge, including their past two match-ups.

The 49ers easily won their clash at Levi's Stadium earlier this year, 37-8.

Who will win 49ers vs Packers?

The match-up of this year's NFC Championship is great, even for neutral observers. The once-mighty 49ers, who previously boasted quarterbacks the ilk of Hall of Famers Joe Montana and Steve Young, are trying desperately to regain relevance.

Under young coach Kyle Shanahan and quarterback Jimmy Garoppolo, San Francisco produced an impressive 13-3 regular season and were one of the best performing teams throughout 2019/20.

Packers quarterback Aaron Rodgers has long been expected to rival the greatest passers in the history of the game. When he was named MVP after leading Green Bay to the 2010 championship, he was well on his way.

His career has stalled a little since then, with repeated play-off losses. Though this is a chance for him to underline his credentials as an all-time great.

He's also a Californian native and was snubbed by the 49ers back in the 2005 draft. For us that all adds up to a Green Bay victory.

It's showtime as the UFC returns to Vegas.

No subscription? No worries. You can watch the Walla-frees.

Can either side start a run of wins towards the finals?