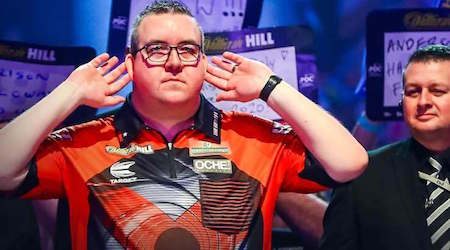 The world's best dart players will compete against each other from their own homes in an innovative new series.

Desperate for some live sport? Well, leave it to the Professional Darts Corporation (PDC) to come up with an innovative way to make that happen.

All 128 cardholders in the PDC have been given the opportunity to compete in a brand new event, the PDC Home Tour.

The only requirements are that players can set up a camera in their own home and communicate with the host and producer in English. One scheduled competitor, two-time winner of the World Championships Gary Anderson, had to withdraw due to weak Wi-Fi in his house, something that has worried everyone in the current times.

What is the PDC Home Tour?

The PDC Home Tour is a new darts tournament created by the PDC. It features the majority of the world's top players competing against each other from their own homes.

When is the PDC Home Tour?

It gets underway at 4:30am AEST on Saturday 18 April and will be held over 32 competition days.

How to watch the PDC Home Tour live in Australia

Fox Sports is showing the PDC Home Tour live in Australia. That means you can follow the action on Foxtel iQ, Foxtel Now and Kayo Sports. Of those options, Kayo Sports is the most cost-effective. It is also being streamed on the official PDC website.

The PDC's own site, PDCTV, will be broadcasting the event. It is free to watch if you have a PDCTV account.

How to watch the PDC Home Tour on Kayo Sports

If you haven't tried it yet, Kayo currently has a 14-day free trial. So the PDC Home Tour could be the ideal time to test it out. Right now without its offering of 50 live sports, Kayo instead has thousands of hours of on-demand content, ranging from classic matches to ESPN's 30 for 30 docuseries and more. We have put together a full review of the service for you.

Subscriptions for Kayo Sports are $25 a month for the Basic option, where you can watch games on 2 screens or devices. The Premium option is $10 more per month and gives you 3 screens.

How to watch the new PDC Home Tour on Foxtel Now

Foxtel Now is the pay TV giant's digital streaming service. You have to subscribe to the Essentials pack in addition to the Sport pack, a total of $54 a month.

What is the format of the PDC Home Tour?

There are 32 groups of 4 players in total and 4 players will be in action each night. Once each player has faced everyone in their group, there will be 32 group winners progressing to the next round. All matches are the best of nine legs. A player is awarded two points for a win.

Who is competing in the PDC Home Tour?

PDC Home Tour fixtures (nights one to four only):