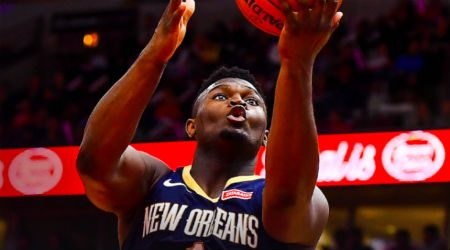 It's time for the hype train that is Zion Williamson to finally play in the NBA. Here's how to watch Pelicans vs Spurs.

Zion is easily the most followed youngster since LeBron James. His highlights have been going viral since he was in high school. This all led to him being the number 1 pick in the 2019 NBA Draft.

His pre-season and summer league play was scintillating, but a right knee injury has held him out from appearing. While we were robbed of his introduction to the league against Ja Morant, we'll now see him take on the Spurs.

When is Pelicans vs Spurs?

New Orleans and San Antonio tips off at 1:30pm AEDT on 23 January. Zion will be able to play in front of his home fans at the Pelicans' Smoothie King Center.

How to watch New Orleans Pelicans vs San Antonio Spurs

The Pelicans vs Spurs is being broadcast on ESPN and NBA League Pass. So hyped is Zion's first game the network actually dumped its original schedule of Western Conference heavyweights Houston Rockets vs Denver Nuggets.

In Australia ESPN can be watched on Kayo Sports, Foxtel, Foxtel Now and Fetch TV. Though if you aren't already a subscribed to any of those, then Kayo is your best bet. League Pass subscribers need not worry as they get access to every single contest year round.

You can immediately watch Zion take on the Spurs on Kayo by using the 14-day free trial. On average Kayo has seven live NBA games per week.

In addition to that Kayo has shows like The Jump, First Take and Inside the NBA, giving you comprehensive coverage of the entire season. Kayo also has over 50 other sports on offer.

A Basic subscription to Kayo is $25/month and lets you watch on 2 screens. Or if you want to stream on 3 devices, you can opt into a Premium subscription for $35/month. There's no lock-in contract so you can cancel anytime.

By pairing Kayo, with SBS's NBA coverage, you'll get an average of nine games to watch per week. This provides great value when you consider how many sports are on offer and that League Pass is $300 annually.

Kayo comes with several features too. SplitView lets you watch four sports at once. There's also Kayo Minis which are similar to extended highlights, a Key Moments timeline and more. Our Kayo review will run you through some.

While both teams are currently on the outside of a play-off seeding, neither are too far off. San Antonio (19-23) specifically are just 0.5 games back of the eighth seeded Grizzlies. New Orleans started the season slow, but have since recovered to (17-27) to stay in the race.

The Spurs haven't missed the play-offs since 1997. Almost every year since the Spurs' last title in 2014, they've been doubted, but continue to exceed expectations.

Right now guard DeMar DeRozan is on fire averaging 26.1 points, 5.9 rebounds and 6.5 assists over the last month. DeRozan is also shooting an outrageous 60% from the field in that time.

As excited as everyone is for Zion to return, his integration into the rotation will be interesting. The Pelicans have also won 6 of their last 10 and don't want to shake things up. Initially Williamson will have a minutes restriction, but the bigger juggling act is his position.

Zion will likely spend his entire time at power forward. Problem is Brandon Ingram is playing like an All-Star and has spent the majority of his minutes at that position.

While inconsistency has affected both teams this year, the Pelicans are starting to get some wind in their sails. Expect a tight one, but the Pelicans to just squeak out a win.